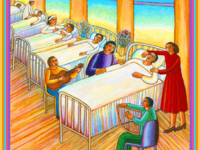 How can the community of care—including family, friends, clergy, hospice, and medical professionals—together provide holistic care to the dying?

This is the first of a four-part webinar series “Accompanying the Dying and the Dead in the Time of COVID.” | series information

Dr. Thomas G. Long is Bandy Professor Emeritus of Preaching at Candler School of Theology, Emory University. His introductory homiletics textbook, The Witness of Preaching, has been translated into a number of languages and is widely used in theological schools around the world. In 2010, Preaching magazine named The Witness of Preaching one of the 25 most influential books in preaching for the last 25 years. Dr. Long gave the distinguished Lyman Beecher Lectures at Yale, which were published in his 2009 book Preaching from Memory to Hope. Dr. Long is also deeply interested in biblical studies, practical theology, and liturgy. His books on the Christian funeral, Accompany Them with Singing and The Good Funeral (co-authored with noted poet and funeral director Thomas Lynch), have generated interest both in the academy and the media. Another book, What Shall We Say? Evil, Suffering, and the Crisis of Faith,  addresses the issue of innocent suffering and the goodness of God, and was selected as the Book of the Year for 2011 by the Academy of Parish Clergy. An ordained minister in the Presbyterian Church (USA), Dr. Long served as the senior homiletics editor of The New Interpreter’s Bible, and he is associate editor of Journal for Preachers and editor-at-large for the Christian Century. Emory University awarded him the Emory Williams Award for teaching excellence in 2011.

Dr. W. James Abbington is Associate Professor of Church Music and Worship at Candler School of Theology in Atlanta, GA. His research interests include music and worship in the Christian church, African American sacred folk music, organ, choral music, and ethnomusicology. He serves as executive editor of the African American Church Music Series by GIA Publications (Chicago) and has produced numerous recordings for that publisher. One of the nation’s most respected choir directors, musicians and authors, Dr. Abbington is a popular speaker, performer and conductor at universities, conferences, symposiums and churches around the world. From 2000 to 2010, he served as co-director of music for the Hampton University Ministers’ and Musicians’ Conference, and as the national director of music for both the Progressive National Baptist Convention and the NAACP. In 2010, Hampton’s Choir Directors and Organists Guild honored Abbington by naming their Church Music Academy after him, and in 2015, he became the second African American to be named a Fellow of The Hymn Society in the United States and Canada.

Jennifer L. Hollis is a writer, music-thanatologist and the project director of Harps of Comfort, an organization that began in response to the COVID-19 pandemic. Harps of Comfort provides live, remote music to isolated patients; those with COVID-19 and other serious illness; patients nearing the end of life; and their loved ones and caregivers. Hollis is the author of Music at the End of Life: Easing the Pain and Preparing the Passage (Praeger) and a contributor to Religion and Healing in America (University of Oxford Press). She researched and prepared an issue brief for The Pew Charitable Trusts called “How Faith Communities Facilitate Conversations Around End-of-Life Concerns.” Her essays have been published in The New York Times, The Washington Post, Harvard Review, and other publications. For more than twenty years, she has been a certified music-thanatologist, offering harp music and singing to accompany dying patients in Montana, Oregon, Chicago, and Boston and she is the former president of the Music-Thanatology Association International. She has a degree in child development from Connecticut College and a master of divinity from Harvard Divinity School, where, once upon a time, she was the assistant director of admissions. She lives outside Boston with her family.

The Rev. Michael L. Lewis is a priest of the Catholic Diocese of El Paso and is currently parochial vicar of Saint Mark’s Catholic Church in his hometown of El Paso, Texas. Over the last year, as part of the diocese’s Covid-19 Ministry Team, he has ministered to hundreds of patients and their families directly impacted by the pandemic, as well as to thousands more in the Borderland region, one of the hardest hit by the coronavirus. Previously a journalist for newspapers in Texas and Florida, and later for the U.S. Army, Fr. Mike received a licentiate in sacred theology degree and a master’s in divinity degree from The Liturgical Institute at the University of Saint Mary of the Lake in Mundelein, Illinois; studied theology at the University of Notre Dame in Notre Dame, Indiana; and received a bachelor’s degree in theology and philosophy from Barry University in Miami Shores, Florida. He is a board member of the Southwest Liturgical Conference, and active in the Federation of Diocesan Liturgical Commissions.