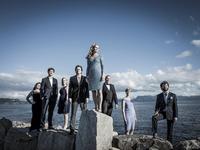 with members of Yale Voxtet

Program Note for From the Beginning of the New World

From the Beginning of the World was commissioned by the Cardinall’s Musick and premiered at Cadogan Hall on the 20th July 2015 in the first of the 2015 BBC Proms Chamber Music Concerts. The concert launched The Tallis Edition, a new project by the ensemble with an aim to throw new light on Tallis’s work, and part of the commission brief was that my new piece should be a homage to this great English polyphonist.

I spent several weeks in libraries attempting to find a suitable text, eventually settling on excerpts from Tycho Brahe’s German Treatise on the Great Comet of 1577. Whether Tallis knew about the comet is unknown of course, but this seismic event, to me, seemed emblematic of all the great changes that occurred during his lifetime, in areas such as religion, the calendar, and time-keeping (finding out that Tallis lived out his last days in Greenwich was an extra bonus). The text also seems to speak to contemporary times: whilst Brahe may have thought the comet’s birth would cause the sun to ‘bring unnatural heat’, nowadays we know that its ‘venom [will be] spewed over the lands’ due to mankind’s continued pillaging of the earth’s natural resources, a fact which our political ‘pseudo-prophets’ seem to deem less important than saving us from a false austerity.

The music itself is very influenced by Tallis, and canons and imitation abound. During my time as a ‘cellist at the Yehudi Menuhin School, I performed Ralph Vaughan Williams’s Fantasia on a Theme of Thomas Tallis many times, and so From the beginning of the world, which also uses Tallis’s Third Mode Melody from the English Hymnal, is really a homage to both composers.