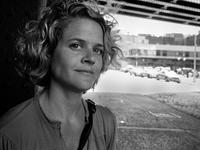 Book-signing follows.This visit is being cosponsored by the Poynter Fellowship in Journalism at Yale. Presented in collaboration with the Yale Divinity Student Book Supply.

Beyond the headlines, more than four million Syrians have fled their country, and minority communities of the Middle East, among them Christians and Yazidis are struggling to survive or choosing to flee their ancient homelands.  The pressures go far beyond ISIS. Eliza Griswold, journalist and poet, will address this crisis, which she covers for The New York Times Magazine, and will read from her forthcoming collection of poems, ISIS and Friends.

Eliza Griswold is a poet and reporter whose work has appeared in the New Yorker, the Atlantic, the New York Times Magazine, Harper’s, and the New Republic. Her books include the poetry collection Wideawake Field (2007) and the non-fiction title The Tenth Parallel (2010), which examines Christianity and Islam in Asia and Africa. In 2010, Griswold won the Rome Prize from the American Academy in Rome for her poetry, and in 2011, The Tenth Parallel received the Anthony J. Lukas award. A former Nieman Fellow in Journalism at Harvard, Griswold is currently a senior fellow at the New American Foundation, a nonpartisan public policy institute.