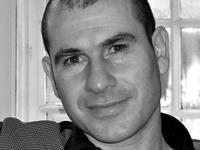 Reading from the forthcoming novel The Sheikh of Salt Street

The Sheikh of Salt Street recounts the spiritual, political, and sentimental education of Ibrahim Allahiat Alhamra’, a Palestinian refugee in Lebanon, Kuwait, and finally America. With a secretly and ardently Moslem mother and an indifferently Christian father, Ibrahim tries to negotiate his own faith and identity in a world of increasingly violent ethnic and religious division.

Naeem Murr, a dual US and UK citizen, is the author of three novels, The Boy, which was a New York Times Notable Book, The Genius of the Sea, and most recently The Perfect Man, which was awarded The Commonwealth Writersʼ Prize for the Best Book of Europe and South Asia, and was long-listed for the Man Booker Prize.  His work has been translated into many languages.  He was a Stegner Fellow at Stanford University and has been awarded a Guggenheim Fellowship, a PEN Beyond Margins Award, and two Lannan Residency Fellowships.