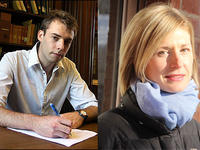 Poets Danielle Chapman and Nate Klug will read their work in Marquand Chapel on Thursday, April 23, at 5:30 PM. The reading is free and open to the public.

Reading followed by book-signing and reception. Presented in collaboration with the Yale Divinity Student Book Supply.

Danielle Chapman is a poet and lecturer in English at Yale University. Her poems have appeared in a number of publications, including The New Yorker, The Atlantic Monthly, The Harvard Review, and Poetry International. She will be reading from her debut collection of poems, Delinquent Palaces, to be published by Northwestern University Press in April 2015.

At Yale, Chapman teaches Reading Poetry for Craft and Introduction to Creative Writing. Previously, she served as the Director of Publishing Industry Programs for the Chicago Department of Cultural Affairs, which supported and promoted Chicago’s writers, publishers, and literary community.  She was also a consulting editor for The Poetry Foundation.  Her critical reviews have appeared in Poetry, The New York Times Book Review, and The Chicago Tribune.

She lives in Hamden with her husband, the poet Christian Wiman, and their twin daughters.

Nate Klug was born in Minnesota, grew up in Wellesley, Massachusetts, and earned a B.A. in English at the University of Chicago and an M.Div. from Yale Divinity School. He is the author of Rude Woods (The Song Cave, 2013), a book-length adaptation of Virgil’s Eclogues, and Anyone (University of Chicago, 2015). In 2010 he was awarded a Ruth Lilly Fellowship by the Poetry Foundation. A UCC-Congregationalist minister, he has served churches in North Guilford, Connecticut, and Grinnell, Iowa.  Biography taken from http://poetry.org