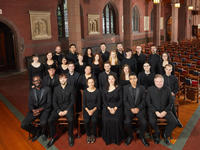 Telemann was famously prolific. The eighteenth-century music writer John Hawkins called him “a very voluminous composer” and quoted Handel as saying that Telemann “could write a church piece of eight parts with the same expedition as another would write a letter.” Telemann’s catalogue includes several thousand works in all the major genres of the day, including some 1,700 sacred and secular cantatas, fifty or more operas, and dozens of oratorios. The sheer quantity of his output made it easy for later generations to overlook the consistently high quality of his workmanship and inspiration. But in the eyes of his contemporaries, Telemann was a giant. “A Lully is renowned; Corelli one may praise; but Telemann alone has above mere fame been raised,” the composer Johann Mattheson poeticized in 1740. When the post of cantor at Leipzig’s St. Thomas School fell vacant in 1722, Telemann was widely tipped to be a shoo-in. Only after he withdrew his application (his employers in Hamburg belatedly raised his salary rather than let him go) did the Leipzig town council offer the coveted job to Bach instead. Telemann remained in Hamburg for the rest of his life, enjoying the artistic autonomy afforded by his well-paid sinecure as cantor of the local Latin school and music director of the Hanseatic city’s five principal churches.

Unlike the stay-at-home Bach, Telemann traveled throughout German-speaking Europe and even made an extended foray to Paris, where he ingratiated himself with his hosts by composing a set of six quartets for flute, violin, viola da gamba, and continuo that paid homage to the French Baroque suite. A fluent French-speaker and confirmed francophile, Telemann believed that in the music of Lully and his compatriots, the “best kernel of France’s science” had “grown into a tall tree with the ripest of fruit.” This cosmopolitan outlook was mirrored in Telemann’s music, which combined the German love of counterpoint with the French affinity for suave melodies and harmonies and the newly fashionable Italian taste for brilliant display. In contrast to Bach, whose intricately contrapuntal music was considered old-fashioned by the time he died in 1750, Telemann cultivated the “noble simplicity” of the up-to-date galant style, whose playful elegance, transparent textures, and formal freedom offered an attractive alternative to Bach’s strict, “learned” idiom. According to the influential critic Friedrich Wilhelm Marpurg, Telemann’s music gave the lie to the widely held assumption that “the so-called galant style cannot be combined with elements borrowed from polyphony.”

The quasi-theatrical musical language of Der Tag des Gerichts (The Day of Judgment), the last of Telemann’s sacred oratorios, reflects the eighty-year-old composer’s deep immersion in opera earlier in his career. Perhaps in acknowledgment of its hybrid style, he labeled his religious drama a Singgedicht, or musical poem, implicitly connecting it to the popular German variety of light opera known as Singspiel. Whatever name it went by, the Baroque oratorio had much in common with opera. The two genres originated in Italy around the same time, grew up side by side, and attracted many of the same composers, performers, and audiences. Indeed, the oratorio had all the musical trappings of opera—arias, recitatives, ensembles, and choruses; orchestral accompaniments and interludes; and so on—but was typically presented in concert form, with no (or minimal) sets and costumes. Indeed, the premiere of Der Tag des Gerichts, on March 17, 1762, took place not in a church but in Hamburg’s recently inaugurated Concertsaal auf dem Kamp, Germany’s first purpose-built concert hall. Mattheson had introduced local burghers to the more theatrical style of church music nearly half a century earlier as music director of Hamburg Cathedral. That deliberate breach of tradition, in tandem with Mattheson’s insistence on employing female singers (a practice hitherto verboten in both Protestant and Catholic churches), had provoked a backlash on the part of conservative clergymen and city fathers. But the controversy had long since died down, and Telemann felt free to recount the Last Judgment story in his most vivid and dramatically efficacious manner.

In any case, the division of the oratorio into four act-like sections titled “meditations” (Betrachtungen), underscoring its fundamentally devotional character, surely allayed any lingering audience resistance to the new church music style. Taking his cue from the pietistic libretto by his former student, the poet (and soon-to-be Lutheran pastor) Christian Wilhelm Alers, Telemann cast his musical meditation on the Day of Judgment as a conversation between voices of belief and disbelief, religion and reason. In its lucid dialectical structure, Der Tag des Gerichts dramatized the arguments over rationality and faith that spread across the continent like wildfire in the age of Enlightenment, sparked by the writings of iconoclastic philosophers like Voltaire and Kant. Musically, the score is structured as a sequence of discrete solo arias and choruses, speech-like recitatives and more melodious ariosos; the latter are accompanied either by various members of the orchestra or by basso continuo alone. Although in earlier oratorios Telemann had moved away from the conventional operatic da capo aria, here he seems to embrace its rounded ABA form in a spirit of religious affirmation and reaffirmation. The festive atmosphere of the oratorio’s outer sections is enhanced by the addition of trumpets, horns, and timpani to the core ensemble of oboes and strings, with the distinctive timbres of the grosse oboe (a mezzo-soprano member of the oboe family), bassoon, and viola da gamba contributing special coloristic effects.

As befits the solemn theme of Der Tag des Gerichts, the First Meditation is prefaced by a majestic orchestral introduction; Telemann’s contemporaries would have associated its jerky dotted rhythms and two-part, slow-fast format with overtures to French operas and ballets. The opening chorus of Believers, in resplendent D major, balances multilayered counterpoint with the simpler homophonic textures of the galant style. The ensuing arias and recitatives are sung by allegorical characters representing both sides of the faith-versusreason debate. Disbelief launches this expository exchange with an aria characterized by sharp contrasts of dynamics and articulation. (Telemann’s score is peppered with German expressive markings like stark [strong], gelinde [gentle], and munter [cheerful], which he often used in preference to the traditional Italian terms.) The quivering sixteenth notes that accompany the words “zittert im Staube” (tremble in the dust), and the rising triplet figures on “wir steigen empor” (we are climbing upward), exemplify Telemann’s tone-painting skills. In the following highly dramatic recitative, Disbelief is summarily silenced by Reason, who in turn yields the floor to the Mocker’s jaunty certitudes. Thereupon Reason returns to the fray, invoking the destructive forces of nature in an aria marked by clashing two-against-three rhythms. Religion ultimately intervenes in a harmonically eccentric recitative, gently but firmly steering us back to the straight and narrow path of D major for the concluding chorus of praise.

Devotion—both personified and ideated—takes center stage in the Second and Third Meditations, which range increasingly far afield from the oratorio’s tonal center. In an agitated chorus, the nameless masses (significantly, no longer identified as believers) who are awaiting God’s judgment give voice to their hopes and fears. Devotion responds in an accompanied recitative that flickers mercurially between sternness and compassion, darkness and light. This contrast is magnified in the following numbers, as both the prospect of divine retribution and the promise of deliverance become steadily more apparent. Real, not metaphorical, trumpets sound early in the Third Meditation, as Devotion invokes the avenging angel and the “transfigured Son of Man.” Jesus addresses his faithful flock in a tenderly consolatory arioso, accompanied by obbligato oboe and plucked strings. Their serene C-major chorale speaks confidently of redemption, but once again Disbelief demurs, his anguished outburst echoed by a tumultuous chorus of Vices screaming “Weh uns!” (Woe to us!) in the remote key of F minor. The third section closes with an implacable Jesus cursing the “Godless” and consigning them to perdition.The Fourth Meditation —dominated, as one might expect, by the voices of the blessed and the heavenly choirs—returns to the home key of D major and brings back the festive brass and timpani we heard at the beginning of the oratorio. After a jubilant opening chorus, in which the angels are joined by those whom God has deemed worthy of salvation, John the Baptist—who preached the Last Judgment and is often seen as a Christ figure himself—delivers the first of two short sermons in song, while in the background the chorus intones “Heilig ist unser Gott” (Holy is our God) in long, sustained notes. This fervent prayer is repeated as a kind of refrain amid three sweetly rapturous arias sung by soloists drawn from the ranks of the blessed and accompanied, respectively, by obbligato viola da gamba, violin duo, and oboe and bassoon. Telemann ends his “musical poem” with a pair of grand, brassy choruses, framing a quietly exultant recitative in which Faith settles the argument once and for all.