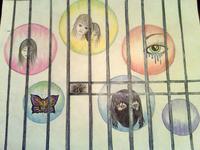 Fragments of Dante’s poem adapted by men in prison and performed by the students in Professor Ron Jenkins’ course “Sacred Texts and Social Justice.”

A group of incarcerated men at the MacDougall-Walker Correctional Institution have spent the last few months re-imagining Dante’s journey from hell to paradise as it might apply to their own life journeys. They have collaborated with Yale students on writing theatrical adaptations of fragments from Dante’s “Divine Comedy” that will be performed in New Haven. The performance will be followed by a moderated discussion about mass incarceration, transformation, and the arts.

Program Note from the Director

In his illuminating analysis of Dante, Yale Divinity School Professor Peter S. Hawkins quotes St. Paul’s advice about mental renewal as a prelude to discussing the theme of transformation in the Divine Comedy: “… it is not the penitents’ suffering that the poem dwells on,” Hawkins writes, “it is the degree to which art, music, language – beauty of all kinds – assist in personal transformation.”

Having worked for many years with Dante’s text in prisons I discovered that this theme of transformation is central to the poem’s reception by individuals behind bars. While Dante’s Inferno lives in the popular imagination as an icon of misery and torment, readers in prison explore the Divine Comedy as a story of renewal that parallels their own life journeys from a “dark wood… where the straight path was lost” to a better place where they hope to “emerge once again to see the stars.”

For the men and women I meet in prison, Dante’s poem is a story of hope. They identify strongly with the author as a man who, like them, was convicted of crimes and exiled from his home. They see Dante as someone in bleak circumstances who chose literature as a path enabling him to write his way out of hell and into heaven. In their written responses to Dante’s poem many incarcerated authors try to do the same thing. Having spent the semester collaborating with Yale undergraduates and Divinity School students, residents of the MacDougall-Walker Correctional Institution have reimagined fragments of Dante’s poem as the theatrical sketches that will be presented both here at Yale and in the prison where they were written.

In the words of a woman who continued to perform Dante’s work after her release, encountering the poem in prison, “helped us evolve in an environment where it is much easier to devolve.” Her comments mirror the observations of Columbia Law School Professor Robert Ferguson who wrote a book comparing the American justice system to Dante’s Inferno. Speaking at Yale a few weeks ago he observed that writing is an essential tool for people in prison to achieve transformation. “If you don’t let them develop positively,” he said. “they will develop negatively.”

Hearing these responses to Dante’s poem can be transformative for listeners on either side of a prison’s walls.

On the long bus ride back to New Haven after our weekly sessions at Macdougall-Walker I would reflect on the insight, intelligence, and creativity of the men we worked with. The words from Dante that came back to me most often were from Canto IV of Inferno: “Deep sorrow struck me when I understood, because then I knew that people of great value were suspended in that limbo.”

Ron Jenkins is a Visiting Professor of Religion & Literature at Yale Institute of Sacred Music. A former Guggenheim and Fulbright Fellow, he has facilitated Dante workshops in prisons in Italy, Indonesia, and America.