Symposium | Afro-Christian Festivals of the Americas 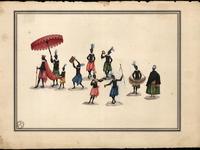 presented with support from the Council on Latin-American and Iberian Studies, Macmillan Center for International and Area Studies.

From the early moments of the Atlantic Slave Trade to this day, across the American continent, men and women of African origin or descent got together and socialized in the orbit of Christian churches. These organizations allowed them to hone relatively independent forms of socialization and cultural productions. Festive events that emerged in this context such as the coronation of black queens and kings in colonial and contemporary Brazil have received robust academic attention. Yet, studies of Afro-Christian festivals among enslaved and free populations have so far mainly remained conscribed within sharply defined disciplinary, national, and chronological boundaries.

This one day symposium proposes to open up the conversation on Afro-Christian festivals in the Americas by gathering scholars from several disciplines who have individually produced important, innovative work on related, but seldom compared traditions from different regions of the so-called Western Hemisphere.

Confronting sources, methodologies, and interpretations, symposium participants will have the opportunity to reflect not only on the state of knowledge about their common object of study, but also on possible new directions for research and teaching about these traditions that have been central to black religious and artistic experience in the Americas.

Jeroen Dewulf, Associate professor and director of the Institute of European Studies, University of California, Berkeley:

Black Ceremonies in Perspective: Brazil and Dahomey in XVIII century

Queen Njinga in Brazilian Popular Culture: In Search of History and Memory

The “immense universe” of musical experience within Afro-Brazilian Congado

Public Performances of a Black Brotherhood in a Brazilian Mining Town

Kings of the Kongo, Slaves of the Americas: Staging African Identity in a Renaissance Festival in Mexico City in 1539