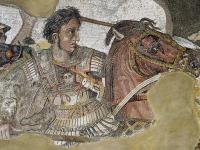 An ode to the power of music, set by Handel

Born in Halle, Germany, the son of a barber-surgeon who died when he was eleven, Handel cut his musical teeth in the cosmopolitan port city of Hamburg in the first decade of the eighteenth century. After serving an apprenticeship in the Hamburg opera orchestra, he transferred to Italy for finishing school. The Venetian production of his Agrippina in the winter of 1709–1710 gave him his first taste of success as an opera composer. From Italy he proceeded to London, where he scored another hit with Rinaldo, thanks in part to its crowd-pleasing waterfalls, fireworks, and other scenic effects.

Although Handel soon branched out into other fashionable genres—anthems, odes, cantatas, keyboard and chamber music, serenades, and music for royal occasions (including the famous Water Music that entertained King George I on an excursion on the River Thames in 1717)—his enthusiasm for opera remained keen. So when a group of aristocrats offered him the directorship of the newly formed Royal Academy of Music in 1719, with the objective of providing a permanent home for Italian opera in the British capital, he jumped at the chance. For the next nine years, Handel’s life revolved around the King’s Theatre in the Haymarket, where he wore multiple hats as house composer, impresario, conductor, opera coach, and talent scout.

It was largely thanks to Handel that Georgian London became one of Europe’s operatic capitals. Prospering financially as well as artistically, he leased an elegant townhouse in Hanover Square, which would be his home for the rest of his life. By the time he became a naturalized British citizen in 1727, the English had claimed Handel—who never lost his thick German accent—as their greatest living composer. In the late 1730s, he diverted his energies from opera to oratorio—a genre for which the British public had a seemingly insatiable appetite—and secular works of a dramatic or quasidramatic nature. Although written for the concert hall rather than the stage, Saul, Messiah, Judas Maccabeus, and other sacred oratorios illustrate Handel’s genius for vivid characterization and scene painting no less than his operas.

The same can be said of Alexander’s Feast, or The Power of Music, one of several smaller-scale Handelian works inspired by the legend of St. Cecilia. Musicians and music lovers have long revered the Sicilian martyr as the patron saint of their art, despite the fact that her connection to music—indeed, her very existence—is shrouded in mystery. Recent scholarship suggests that Cecilia’s name is derived not, as previously supposed, from the clan name of the noble Roman Caecilii but from the Latin word caecitas, meaning blindness. The association of blindness and music has a venerable history, dating back at least to Homer. Since the seventeenth century the saint and her feast day, November 22, have been celebrated throughout Europe with performances of Cecilian works by composers as diverse as Henry Purcell, Alessandro Scarlatti, Charles Gounod, Benjamin Britten, and Arvo Pärt.

Composed in 1736, Alexander’s Feast is set to verses that John Dryden had penned some four decades earlier. Handel’s collaborator, the Irish librettist Newburgh Hamilton, apportioned the seven stanzas into a judiciously balanced mixture of arias, recitatives, and choruses. The ode’s dramatic action takes place in ancient Persepolis, where Alexander the Great and his consort, Thais, are celebrating the Greek victory over the Persian army of King Darius at the battle of Gaugamela in 331 B.C.E. Egged on by his court musician, Timotheus, Alexander works himself up into a state of boozy belligerence and resolves to wreak vengeance on his defeated foe by laying waste to the Persian capital. In harnessing Handel’s “God-like Art” and “bright Magnificence of Sound” to the magisterial sonorities of Dryden’s poem, Hamilton sought to demonstrate the power of music to stir the emotions—in Dryden’s words, to “swell the soul to rage, or kindle soft desire.”

To that end, Handel deployed a battalion of strings, winds (flutes, oboes, and bassoons), brass (trumpets and horns), and percussion, reinforced by an expanded continuo group including both organ and harpsichord. The first course of Alexander’s Feast is an instrumental Ouverture that neatly encapsulates the ode’s changeable moods: a majestic introduction characterized by snappy martial rhythms in the French manner is followed by an exuberant Allegro in fugal style and a gentler, more introspective Andante. The tenor salutes the “happy, happy, happy pair,” Alexander and Thais, in a florid, energetic solo that segues into a love duet with the soprano, their voices weaving garlands of euphonious thirds. After Timotheus alludes to Alexander’s divine parentage (Jove is said to have impregnated his mother, Olympia, disguised as a dragon), the chorus pays a resounding tribute to the “present deity” in their midst, and the soprano evokes the monarch’s earth-shaking power in cascades of bravura passagework.

An abrupt modulation from D major to F major announces a rollicking bass aria and a three-part men’s drinking song in praise of wine, the “soldier’s pleasure,” punctuated with mock-heroic horn calls. Alexander’s vainglorious daydreams give way to “soft pity” as soprano and chorus reflect on the fate of mighty Darius, “fallen from his high estate” and “deserted at his utmost need by those his former bounty fed.” (The new key of E-flat major was associated with tenderness and devotion.) Alexander’s thoughts turn from war to love in a lilting soprano arioso accompanied by obbligato cello, and the message that honor is “but an empty bubble” is driven home in the soprano’s ensuing da capo aria, in the “feminine” key of A minor. Part 1 of the ode culminates in a jubilant paean to music and love, as the “vanquished victor,” emitting a succession of helpless sighs, lets his heavy head loll upon Thais’s breast.

Part 2 opens in a blaze of trumpet fanfares and a “rolling peal of thunder” in the timpani as Timotheus strikes his “golden lyre,” rouses Alexander from his amorous slumber, and incites him to revenge. The bass’s sparkling coloratura, suggesting the malevolent glint of the Furies’ eyes, is answered by terse, stabbing figures in the orchestra and the otherworldly sound of the organ as a “ghastly band” of slain Greek warriors parades before the hero’s eyes. Applauded by his entourage (in a fast and furious tenor solo) and abetted by his lover (in a soprano aria of disarming suavity that links Thais to Helen of Troy as a destroyer of cities), Alexander capitulates to music’s superior strength by torching Persepolis. This violent act—described rather than depicted in Handel’s score—is the cue for the long-anticipated invocation of St. Cecilia and a majestic concluding choral fugue (“Let old Timotheus yield the prize”) featuring no fewer than four subjects.

The premiere of Alexander’s Feast took place on February 19, 1736, in the Theatre Royal, Covent Garden. According to the London Daily Post, “Never was upon the like Occasion so numerous and splendid an Audience at any Theatre in London, there being at least 1300 Persons present.” Since the ode was too short to fill an entire evening, Handel fleshed the program out with shorter works, including a concerto for organ, the instrument traditionally associated with Cecilia. Newburgh Hamilton did his part by writing a short lyric for a new final chorus. In the preface to the word-book distributed at the first performance, the librettist expressed his admiration for Handel, “whose Compositions have long shewn, that they can conquer even the most obstinate Partiality, and inspire Life into the most senseless words. If this Entertainment can, in the least degree, give Satisfaction to the real Judges of Poetry or Musick, I shall think myself happy in having promoted it; being persuaded, that it is next to an Improbability, to offer the World any thing in those Arts more perfect, than the united Labours and utmost efforts of a Dryden and a Handel.”

When Alexander’s Feast was revived in 1739, Handel dispensed with the original time-fillers and instead rounded out the evening with his newly composed Ode for St. Cecilia’s Day, set to another Dryden text. Over the years he continued to tinker with the score of Alexander’s Feast, which quickly became one of his most popular works. From time to time the composer presided over performances in aid of the fund for “decay’d Musicians and their Families” that he helped to found in 1738. That same year his publisher brought out a deluxe limited edition of the ode, adorned with an engraving of Louis François Roubiliac’s marble statue of Handel, which had recently been installed in London’s fashionable Vauxhall Gardens. (It can now be seen in the Victoria and Albert Museum.) Holding a lyre emblematic of Timotheus, the composer rests his arm on a stack of leather-bound scores, Alexander’s Feast among them.

Cecilia’s association with blindness had ironic significance for Handel, whose own eyesight began to fail rapidly in the early 1750s as the result of a cataract. “Noble Handel hath lost an eye,” a friend reported, “but I have the Rapture to say that St Cecilia makes no complaint of any defect in his Fingers.” An operation by the royal surgeon proved unsuccessful, and by early 1753 Handel had gone totally blind. Six years later he died, having bequeathed an endowment for his own monument in Westminster Abbey. In Roubiliac’s bas-relief sculpture, the composer stands in front of an organ, Cecilia’s iconic instrument, his unseeing eyes open wide, proudly displaying a page from the score of Messiah.