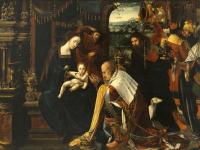 A concert of music for Epiphany

In common parlance, “epiphany”—from the Greek word for appearance or manifestation—means a sudden intuitive insight or flash of recognition. Early Christians adopted the word to describe the revelation of Christ’s divinity that the gentiles experienced when the three magi arrived in Bethlehem to admire the infant Jesus. This event, which provides the theme for tonight’s concert, is traditionally held to have taken place on January 6. Eastern Orthodox denominations, however, typically celebrate the Feast of the Epiphany thirteen days later, on January 19, owing to the discrepancy between the Julian and Gregorian calendars. Among the earliest references to the Christian Epiphany is in the journal kept by a nun named Egeria, who made a pilgrimage to the Holy Land in the late fourth century. In time this feast commingled with that of the nativity as described in the Christmas plainchant “O magnum mysterium” (O great mystery), which pays homage both to “the newborn Lord lying in a manger” and to the “blessed Virgin, whose womb was worthy to bear the Lord Jesus Christ.” (return to top)

Our musical celebration of Epiphany begins with Mary, the subject of this rapturously lyrical hymn by Hildegard commemorating the “wondrous miracle” of the virgin birth. A German Benedictine nun renowned for her ecstatic spirituality and powers of prophecy, Hildegard recorded her visions in vividly imagistic religious poems that she later set to music of an equally individualistic character. “O quam magnum miraculum” (O how great the wonder) is an antiphon, or short monophonic chant, built on a small number of recurring melodic formulas. Much of Hildegard’s word-setting is syllabic, but her prosody becomes increasingly elaborate and the chant ends with long, florid melisma on the word “turbavit” (confused), signifying Mary’s virtue in atoning for Eve’s original sin by giving birth to the son of God. (return to top)

The greatest Spanish composer of the High Renaissance, Victoria cut his musical teeth as a choirboy in his native Avila. The visions of Teresa of Avila colored his early religious experience and may have influenced his decision to enter the priesthood. In due course Tomás’s parents packed him off to the newly established Collegio Germanico in Rome, a Jesuit seminary charged with training “fearless warriors for the faith” to defend the Catholic Church against the threat of the Reformation. Victoria’s weapon of choice was music—the richly textured vocal polyphony associated with Palestrina, whom he knew and possibly studied with in Rome. The four-voice motet O magnum mysterium appeared in Victoria’s first collection of sacred music, published in Venice in 1572. It was an auspicious debut for the twenty-four-year-old composer, including as it did many of the works on which his reputation would ultimately rest. Twenty years later, at the height of his fame, he returned to Rome to supervise the publication of a book of masses, one of which—to be heard later on tonight’s concert—was based on this motet. (return to top)

Although Poulenc’s sensibility was quintessentially Gallic, his style had a distinctively cosmopolitan twist—a quirky blend of simplicity and sophistication, of graceful lyricism and piquant, often acerbic harmonies. Early in his career he allied himself with the circle of irreverently anti-Romantic composers known as “Les Six.” In the last decades of his life, however, he reconnected with the Catholic faith of his childhood. In works like Litanies to the Black Virgin, for women’s chorus, and the opera Dialogues of the Carmelites, his music took on a more overtly religious tone, prompting one critic to describe him as part monk and part rascal. This subdued and serenely lyrical setting of “O magnum mysterium” is one of four Christmas motets that Poulenc composed in the early 1950s. Short melodic phrases, chameleonic harmonies, and passages of wordless humming conjure a mood of muted intensity. (return to top)

The majority of Victoria’s twenty masses are categorized as parodies—that is, they were based on preexisting polyphonic works, including several by Victoria himself. The Missa “O magnum mysterium” is shot through with quotations from and allusions to his aforementioned motet; both the Kyrie and Sanctus movements, for example, reprise the opening melody of the earlier work, with its distinctive motif of a falling fifth that rebounds and then surges upward. As in the motet, Victoria blends homophony and polyphony, reserving chordal word-setting for emphasis or clarity, as in the jubilant “Cum Sancto Spirito” section of the Gloria. The concluding Agnus Dei swells to a five-voice texture, with the divisi sopranos singing the melody in canon. Although Victoria’s contrapuntal mastery is evident in his use of overlapping phrases, imitative entrances, and other learned devices, the overall effect of the mass is one of uncomplicated, transcendent peace. (return to top)

Like Victoria, the contemporary Spanish composer and conductor Javier Busto has written exclusively for the choral medium. Largely self-taught as a musician, he worked as a physician for most of his career and looks upon music and medicine as kindred forms of therapy, “as much for the mind as for the body.” Many of Busto’s secular choral works incorporate the language, melodies, and rhythms of his native Basque Country, while his sacred music is mostly set to Latin texts. “O magnum mysterium” opens in a shimmering misterioso haze, with the four-voice choir quietly chanting the three words ad libitum in slowly changing harmonies. Busto’s tonal language, lightly spiced with dissonance, accentuates the prevailing atmosphere of calm and stillness. Each of the piece’s clearly defined sections explores a different musical idea or texture, culminating in the bright, fanfare-like chords of the final “Alleluia.” (return to top)

Pierre Villette’s choral music is a typically French amalgam of chasteness and sensuality, modernity and tradition. Of a conservative, not to say hidebound, disposition, he drew on sources as diverse as plainchant, Messaien, and jazz; his 1983 setting of “O magnum mysterium” even harks back to Victoria’s motet, from which the tenors quote a snatch of melody on the all-important word “mysterium” just before the final “Amen.”  With its languidly twining contrapuntal lines, Villette’s motet exudes a sense of religious mystery and reverence. As one of the composer’s colleagues noted in an appreciation published shortly after his death, Villette’s music is characterized by “refined harmonies, without exaggerations or anachronisms; subtle chromaticism, although it is plainly tonal, even modal; and above all melodic imagination of great richness.” (return to top)

Best known for his orchestral suite The Planets, Holst demonstrated a deep sensitivity to the human voice in his many operas, choral works, and songs. Like his friend Ralph Vaughan Williams, he combined a practical interest in British folksong with an appreciation for the a cappella choral music of the Renaissance. In his early “Ave Maria” (Hail, Mary) for eight-part women’s chorus, composed shortly after he graduated from the Royal College of Music, Holst evoked the sound and spirit of the sixteenth-century masters. Critics noted the influence of Palestrina and Tallis on his polyphonic writing, and the London Times review of the first performance in 1901 paid him the backhanded compliment of praising the work as “scholarly.” In the Renaissance polychoral tradition, Holst divides the singers into two four-voice choirs, which are separated musically, though not spatially. He dedicated this Marian hymn to his own mother, who died when he was a child. (return to top)

Grieg’s music was deeply rooted in Norway’s landscape and folk culture, as reflected in his many art songs and short character pieces for piano. Yet he also experimented with forms and harmonies that anticipated twentieth-century practices. So strong was his influence on Debussy, Ravel, and their fellow impressionists that the British composer Frederick Delius was moved to quip that all of “modern French music is simply Grieg plus the prelude to the third act of [Wagner’s] Tristan.” There is little trace of this advanced language, however, in the tranquil strains of “Ave maris stella,” which Grieg composed as a solo song (in Danish) in 1893 and arranged as a Latin chorus five years later. Mellifluous harmonized, the hymn’s two verses salute the Virgin Mary as the “star of the sea.”

These two early hymns celebrated the Marian cult that was an important part of Christian worship in the Middle Ages. Set to various chant melodies, “Ave maris stella” and “Ave Maria” were often used as the basis for extended compositions in the medieval and later periods, as the works we’ve just heard by Holst and Grieg show. The Latin text of “Ave maris stella,” in Margot Fassler’s words, “hails the Virgin as the North Star, essential for navigation through life into a safe heavenly port.” “Ave Maria” salutes Mary as the mother of Jesus and asks her to intercede on behalf of humankind. As Fassler points out, “Ave” is “Eva” (Eve) spelled backwards; together, the two chants explore the twin facets of Mary—as saint and sinner—that were central to medieval concepts of womanhood. (return to top)

Another contemporary setting of “O magnum mysterium” brings our Epiphany concert full circle. Morten Lauridsen wrote it in 1994 for the Los Angeles Master Chorale, of which he had recently been appointed composer in residence. The seventy-five-year-old composer has been called an American “mystic,” and his sacred choral music—much of which draws on plainchant and techniques associated with early polyphony—often evokes the mystical, contemplative minimalism of the Estonian Arvo Pärt. Lauridsen does much of his composing on an island off the coast of Washington, a secluded environment conducive to accessing his “inner song.” With its closely knit, mildly dissonant harmonies and quietly sustained lyricism, “O magnum mysterium” casts an entrancing spell. Lauridsen describes it as “a quiet song of profound inner joy.” (return to top)