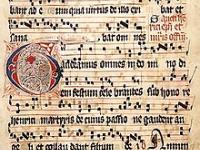 A plainchant Christmas Vespers, according to the Liber Usualis (1963), with thirteenth-century motets from Las Huelgas Codex.

In our modern Western world, we still retain a few important remnants of medieval “holy eve” celebrations. Christmas Eve, New Year’s Eve, and Hallowe’en (eve of the Feast of All Hallows, or All Saints), with all their sense of mystery and anticipation, are important threads that run back unbroken through time to the Christian Middle Ages, and the round of fasts, feasts, and solemnities that marked time on the circle of the church year.

As in Jewish theology and worship, a medieval Christian holy day, and its liturgical celebration, began—and still begins—with Vespers at sunset, the “holy eve” on the day before. Vespers (as in “Hesperus” or evening star) is one of the eight services or hours of the Divine Office, a daily round of psalms and prayers that developed with early Christian monastics (cf. The Rule of St. Benedict, c. 530 CE), and was designed so that, in the course of each normal week, all 150 of the psalms would be chanted or said. In accordance with St. Benedict’s ideal monastic lifestyle of ora et labora (prayer and work), the longest and most musically important of these eight services—Vespers, Compline, Matins, and Lauds—originally and ideally took place between sundown and sunrise, when the monks or nunswould not be working, and could therefore be devoted to prayer, with the luxury of a little sleep in between.

Each of these four important services has a distinct purpose or theme. Matins, which takes place at or after midnight, is the longest and most complex, and is devoted to telling the story of Christian salvation in nine lessons from the scriptures. Lauds is a service of joyful praise just before or at sunrise. Compline, at bedtime, is a plea for protection from the dangers and terrors (to both soul and body) of darkness and night. Vespers is a service of thanksgiving, culminating in the Magnificat, the Virgin Mary’s song of thanks at Gabriel’s news that she would be the mother of Jesus. A great feast day would have a First Vespers (greeting the feast at sundown) and a simpler Second Vespers (sundown on the day of the feast itself, bidding farewell to the day).

In the Middle Ages, there were two versions of the Divine Office, one for monastic establishments, and one for non-monastic (called secular or collegiate) churches. Our Christmas Vespers is First Vespers based on the secular model, as laid out in the Liber usualis, a collection of liturgical plainchant and prayer, published by the Benedictine monks of Solesmes, France, and adopted by the Catholic Church for use by all churches since the beginning of the twentieth century. Our student singers, in the careers that lie before them, are likely to encounter the Liber, either as a source for sung liturgy, or as a reference tool for musical liturgical research; and so, we have chosen to follow the secular, Liber usualis, model for this Vespers.

We have added to our Vespers five medieval polyphonic works, three from the great Las Huelgas Codex, written down c. 1300. It was created for a convent of noble and royal Benedictine nuns in Burgos, north central Spain (then Castile), and contains a great variety of monophonic and polyphonic music, much of it from French sources.

Each hour of the Divine Office begins with the invocation for divine aid, Deus in adjutorium. It functions as a call to prayer, but it is even more than this: it marks the boundary transit between labora and ora. Worldly time, sleep, or work—no matter how pressing or needful—stops, and the higher duty of the cleric or monastic begins. Five antiphon-psalm pairs follow immediately. Except for certain feasts or votive services, the five psalms of Vespers are normally the five we sing here. (The monastic Vespers has only four psalms.) To each is appended the Gloria patri, as a way of “christianizing” the Old Testament texts. The antiphons (short introductory songs) are proper to each feast or occasion, and change almost daily. The psalm that each antiphon encloses is chanted to one of eight psalm tones to match the mode or tone of the antiphon. These modes or tones are roughly equivalent to our modern western major or minor scales, but with flavors and variations that can still be heard very commonly in Western folk music.

Aside from the motet, the most important and inventive polyphonic genre of the thirteenth century was the conductus, wholly made out of new melodic material and, as in Verbum bonum et suave (Las Huelgas Codex), with voice parts that all declaim the same text together.

A scriptural Chapter is intoned, followed by the Christmas hymn Jesu redemptor omnium. Today, we usually encounter a hymn (sacred strophic song) as part of the Christian Eucharist or Mass liturgy, but in the Middle Ages it was, with few exceptions, strictly part of the Divine Office, and was variable, or “proper,” depending on the feast or day of the week. A versicle and response follows, one of several in the Vespers liturgy.These versicles are moments of interaction between the choir and the celebrant or clerical/monastic leader, in which statements of common faith are affirmed by all.

The Las Huelgas motet Gaude virgo nobilis/Verbum caro factum/ET VERITATE is typical of its genre, with two upper voices, each having its own text, over a snippet of plainchant that has been stripped of its text, and formed into a rhythmic foundation for the newly composed upper voices. The thirteenth-century motet, like this one, was the laboratory in which our modern rhythmic notation was developed, to indicate “longs” and “shorts” for individual syllables, as well as the quicker ornamental flourishes between them.

There now follows the climax and culmination of Vespers, the canticle Magnificat and its antiphon. Like the psalms, the Magnificat is chanted to a recitation tone that is selected to match the mode or tone of its enclosing antiphon, which is usually longer and more elaborate than the antiphons to the five psalms. But the canticle recitation tone is more ornamented than that of a simple psalm tone, to set apart the special nature of the canticles—non-psalm scriptural songs of praise or thanksgiving—wherever in the Divine Office they may be found.

With a cascade of urgent exclamations “Iam! Iam!” (Now! Now!) the three-voice motet Iam nubes dissolvitur/Iam novum sidus/[SOLEM] proclaims the joy of the Nativity. Unlike most thirteenth-century motets, its two different texts use similar phrases that bounce and echo in imitation.

When Compline is not sung, the Liber leads from Vespers directly to one of the great Marian antiphons, normally sung at the end of Compline. There are four of these long, elaborate antiphons, each one sung at a different season of the year. The antiphon for Advent and Christmastide is Alma redemptoris mater, which we replace with a three-voice motet Ave regina celorum/Alma redemptoris mater/[ALMA]. The opening phrase of the Alma chant is shaped into an ostinato tenor (a textless foundation voice). One upper voice carries the Alma text, and the other bears the text of the compline antiphon Ave regina celorum, sung after Christmastide, from February through Holy Week.

The Marian antiphon is followed by the Divinum auxilium versicle-response, a quieter and simpler re-invocation of Deus in adjutorium, the opening plea for divine aid, and the circle is closed.