Dianne Bilyak’s (M.A.R. ’06) book Nothing Special: The Mostly True, Sometimes Funny Tales of Two Sisters was published in March by Wesleyan University Press and can be purchased from HFS Books. The book has been included in the Driftless Connecticut Series, a publication award program established in 2010 to recognize excellent books with a Connecticut focus or written by a Connecticut author. 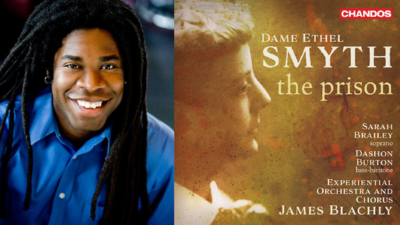 Dashon Burton (M.M. voice ’11) won a GRAMMY in the Best Classical Solo Vocal Album category. Dashon was featured as a soloist on the winning album Smyth: The Prison, the premiere recording of Ethel Smyth’s (1858–1944) last major work. Read more on the ISM website.

John Edward Cantrell (M.M., ‘02) has published The Saint Michael’s Psalter, the psalms of David set to modern harmony Anglican chant.  His psalter brings the venerable tradition of Anglican chant into the 21st century by using harmony associated with jazz and other American roots music. 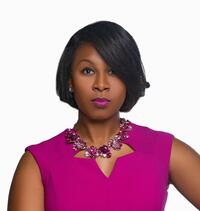 Adam Perez (M.A.R. ’16) is completing a doctor of theology in liturgical studies this spring at Duke Divinity School, where he studies the history of contemporary praise and worship, and will continue there in a postdoctoral program in the fall. Adam will be developing curricular programs in worship, teaching three classes over two years, and acting as a consultant on music and contemporary worship to the Divinity School’s Goodson Chapel. 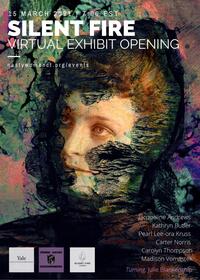 Maura Tuffy (M.M. choral conducting ’21), Andrea Walker (M.M. voice ’21), Kelly Norris (M.A.R. religion and music ’21), and Maddie Blonquist (M.A.R. religion and visual arts ’21) were part of an ISM Collaborative Grant Project working with Nasty Women Connecticut. Their project, “Silent Fire”, is an online exhibition featuring works by and about womxn. The exhibition will be available online March 15–August 15, 2021 and can be found on the Nasty Women Connecticut website. 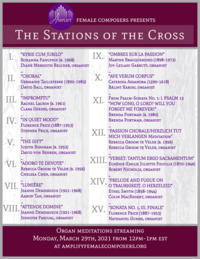 Carolyn Craig (M.M. organ ’21) and graduate Janet Yieh (M.M.A. organ ’19) curated a series of organ meditations on the Stations of the Cross as part of the Amplify Female Composers project. The series features distinguished organists from the around the country (a number of them distinguished ISM alums) performing works of female composers on Lenten themes.

Ashon Crawley’s (2018–2019 Fellow) artwork was featured in two exhibitions (one past and one upcoming) influenced by his book Blackpentecostal Breath: The Aesthetics of Possibility. Read more on the Artlyst website.

Rebecca Dirksen (2020–2021 Fellow) contributed the chapter “Zafé Fatra (The Affair of Trash) and the Affair of Scholarly Engagement: Can Music (and Music Scholarship) Really Clean Up the Streets of Port-au-Prince?” to Transforming Ethnomusicology Volume I Methodologies, Institutional Structures, and Policies. Published in March, the volume is available from Oxford University Press.

Vasileios Marinis co-edited the recently released Architecture and Visual Culture in the Late Antique and Medieval Mediterranean, a collection of essays addressing issues of art, architecture, and archaeology within the context of sacred space in Late Antique and Medieval Mediterranean. Professor Marinis also contributed the chapter “What Makes a Church Sacred? Symeon of Thessalonike’s Commentary on the Rite of Consecration” to the collection. The volume is available from the publisher Brepols. 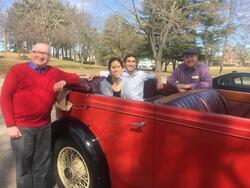 It’s no secret that Thomas Murray, Professor Emeritus in the Practice of Organ, loves Rolls Royces, and it’s even more well-known that he loves taking friends for rides in them. We were delighted to receive a photograph from Prof. Murray of “The Robin” with ISMers Walden Moore (M.M. ’80, Lecturer in Organ), Janet Yieh (M.M.A. ’18, M.M. ’17), and Joey Falla (M.M. ’17) after a ride through Guilford with the convertible top down! 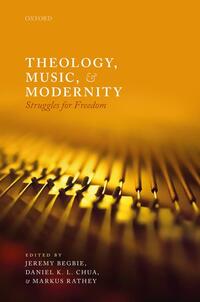 Markus Rathey published Theology, Music, and Modernity: Struggles for Freedom (Oxford University Press) with co-editors Jeremy Begbie (Cambridge and Duke Universities, and our guest speaker for the 2013 Tangeman lecture) and Daniel Chua (Hong Kong University and 2014–2015 ISM Fellow). The book is an interdisciplinary conversation about shifting concepts of freedom, which involves perspectives from musicology, theology, and philosophy. Prof. Rathey’s chapter deals with Mendelssohn’s revival of the St. Matthew Passion and the changing perspectives on individual and communal freedom within the century between 1727 and 1829.  Prof. Rathey says of the book, “I am particularly happy that we have four essays on African American sacred music and on the significance of Richard Allen for the development of Black music around 1800. I was already able to use two of the chapters in my class on “Silenced Voices” last semester. I hope the book will set an example for how to talk about the period of Bach, Haydn, and Beethoven in a more inclusive way.” The book is available from Oxford University Press.

Christian Wiman’s poem “Remembering a City and a Sickness” was published in The New Yorker magazine’s March 15, 2021 print edition. The poem and a reading of it by Prof. Wiman are available on the New Yorker website. 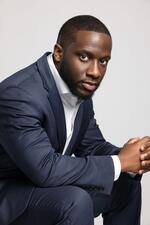 Director of Chapel Music Dr. Nathaniel Gumbs (M.M. organ ’11) presented a recital on February 15 for the San Francisco Chapter of the American Guild of Organists as part of their Black History Month Celebration. We are also excited to announce that Dr. Gumbs joined the distinguished roster of Karen McFarlane Artists, Inc. in March.

Mark Roosien has agreed to remain in his position as interim admissions coordinator for the 2021–2022 academic year. In addition to serving in this role next year, he will offer three courses in liturgical studies, filling the gap created by Professor Spinks’ phased retirement and Professor Berger’s spring term research leave.