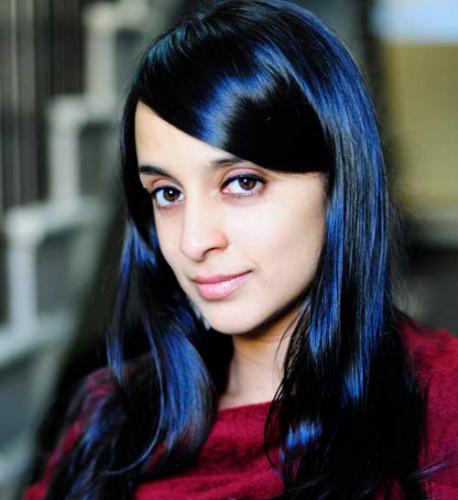 It felt like a dream sequence: I was back in my old neighborhood in Delhi, in the open-air central market. It was a Friday afternoon and the market was bustling - old men joking together at the chai stall, young men hawking their wares - washing machine covers, aprons, socks, flowers, spools of thread. Lepers rolled through the gullies on their dollies, begging for change. Young children ran circles around the legs of their parents as the vendors in each stall laid out the latest fashions, slashed open the freshest coconuts, promised the best deals. The lanes were so crowded that it was impossible to walk in a straight line — and yet that is exactly what I was trying to do, because each time I looked behind me, I saw a long line of musicians from Juilliard and Yale wading through the crowds, hurrying to keep up. Though we had touched down in India that morning, our schedule still had a distinctly American urgency about it: we had less than an hour to pick out clothes, get them fitted and altered, and then bargain it all down to a good price before piling into five cabs and rushing back for an evening concert.

I learned, when I lived in India five years before, that describing things in words as they were happening helped me to remember them more vividly later. For instance: “I am bargaining 300 rupees off kurtis for an amazing baroque violinist from Juilliard.” Or “One of the greatest oratorio singers of all time is taking pictures as I yell at a vendor in Hindi for trying to short change the incredible alto soloist in Yale Voxtet.” Or “A composer who just received a prestigious commission is getting her measurements taken by the old tailor at the sewing machine in the alley behind the shoe stall.” Even in my dreams, I never imagined that I would have the opportunity show the most incredible musicians from my two alma maters the parts of India that mean so much to me.

I am a different person in India. My voice has a different tone, my hands move more fluidly, there is a deliberateness in my gait, and a fire in my personality. I can feel it the moment I step out onto the street, the moment the first words of Hindi form on my tongue. I love wearing colorful kurtis, braiding my hair in a long, thick braid and and letting myself get lost in a sea of people who share my features. This is the only place in the world where I blend in: there is nothing quite like the feeling of being an Indian in India.

I first felt India slipping away from me five years ago, when I returned to America after my Fulbright year. Over the course of the flight from Delhi back to New York, I realized that my life would be defined by my deep love for two countries that were on opposite sides of the globe. That for the rest of my life, I would never be able to be in one place without yearning for the other. I vowed to go back and live in India again as soon as I could, and in September 2015, I finally cleared enough time in my schedule to move back for six months. My apartment in Mumbai was rented, I had work and plans to study khayal singing. But in the time I had been away, the government had changed. And while it became easier for most Indian Americans to get a visa, it became much harder for anyone with Pakistani heritage — myself included. On November 2, 2015, after months of pleading with government officials on every level, I was finally denied the long-term visa I needed to move back to India. I cancelled my plane ticket and gave up my apartment. I was beyond devastated. And then, the next day, on November 3rd, Martin Jean emailed to offer me this commission.

Returning to India for these concerts meant more to me than I can put into words. In one way, it felt surreal to finally be back in the country I’ve only been able to dream about for the past five years. And in another way, it felt completely natural - as if I just picked up my life in India from right where I left it in 2012. There were moments in every performance, in Delhi, Mumbai, and Chennai where I looked out into the audience and had to fight back tears. At times, these countries have felt even further away to me than the 7,000 miles or 14 hours of travel between them. And yet here we were, Hindustani and Western musicians, side by side, in major Indian concert halls, giving the premier performances of my piece called This Love Between Us: Prayers for Unity. At times I wasn’t sure if I was a Hindustani or Western musician — in one moment, I would exchange a quick nod with conductor David Hill, and then immediately turn to Rabindra Goswami, the sitar player, and offer a gentle nod, and an open-palmed invitation to enter with a phrase of Raag Yaman. To David, my gestures were quick, clean and understated, and to Rabindra Ji they were rounder and more descriptive, drawing the shape of the phrase that was to follow. In those moments, I was able to be the musical conduit in performance that I strive to be in through music I write.

Every time we traveled, sitting in planes, trains, buses, cabs and rickshaws, I found myself instantly engaged in conversation with a different person in the group. As a composer, this is the first time I’ve had the opportunity to converse with almost everyone in a large ensemble that is performing my work. Each musician perceived India through a unique lens, and it was incredible to get a glimpse of the country through each person’s eyes — to think about India in new ways through each person’s questions. “How exactly do you know whether someone is saying yes or no by the way they move their head?” “How do so many different religions and subcultures exist side by side?” “How do Indians feel about the poverty in their own country?” “How has Hindustani music developed differently because they don’t have a comprehensive notation system?” “Should I actually be concerned about touching the monkeys?” (Short answer to that one: yes.)

I cherished the discussions that blossomed from each of these questions, asked not only out of intellectual curiosity, but also from a place of warmth, from a deep desire to engage and connect with the culture. As a child growing up in America, I always felt that I had to separate my Indian heritage out from the rest of my life — that I had to present a version of myself to the outside world that was stripped of my family’s culture. I got very good at creating this pared down version of myself — most children of immigrants do. But with each question, with each time I had the opportunity to share my perspective and learn a new one, I felt my heart opened up a little bit, too.

As much as I enjoyed each of these interactions, I was grateful that for the last leg of my travels, back home to Los Angeles, I was alone. The moment the wheels left the ground in Delhi, I couldn’t contain my grief. Anticipating the heartbreak of leaving India didn’t make it any less difficult to bear. I watched through the porthole window as the lights of the city moved further and further away, and finally disappeared from sight. And then the ganvs, the villages, laid out like tiny suspended fireworks on the ground, grew smaller and smaller as the plane rose into the sky. And for those moments, I was just a girl who was saying goodbye to the country she loved one more time.

I wish I could live in India and America at the same time. I wish they shared a border, and I could build a little home right in between them. I know I can’t do that in the physical world, but this is where I live every day in my music.

Reena Esmail is a graduate of both Yale and Juilliard. Her work embraces both the Western and Hindustani (North Indian) classical music idioms. In 2011-2012 she was a recipient of a Fulbright-Nehru grant, and moved to Delhi, where she was affiliated with the Faculty of Music and Fine Arts at Delhi University, and studied Hindustani vocal music with Gaurav Mazumdar. Esmail was selected as a 2011 INK Fellow to speak about her work at the INK Conference (in association with TED) in Jaipur, and throughout India.

Of This Love Between Us, she says “Each movement contains a unique combination of Indian and Western styles, and each of the musicians is asked to keep one hand firmly rooted in their own tradition and training, while reaching the other hand outward to greet another musical culture,” says Esmail. “I wrote This Love Between Us through some of the darkest times in our country and in our world. But my mind always returns to the last line of this piece, the words of Rumi: ‘Concentrate on the Essence, Concentrate on the Light’.”