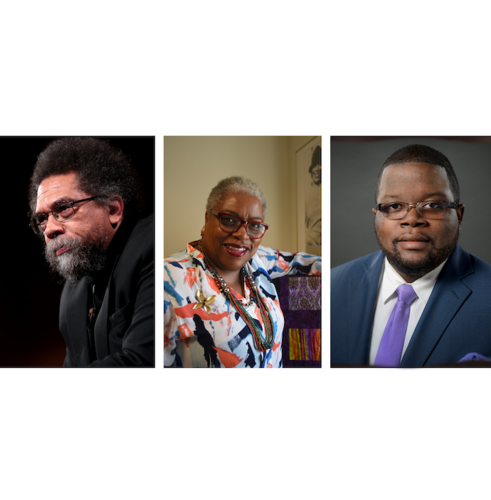 On November 3rd, 2021, the ISM presented a meditation on Black gospel song by Professor Braxton D. Shelley in conversation with Cheryl Townsend-Gilkes and Cornel West, interspersed with instrumental solos by esteemed gospel musicians.

The event, which occurred in Marquand Chapel, dually launched the ISM’s new interdisciplinary program, MUSIC & THE BLACK CHURCH, and celebrated Prof. Shelley’s latest publication, Healing for the Soul: Richard Smallwood, the Vamp, and the Gospel Imagination.

All photography courtesy of Faith Hahn unless otherwise stated.

(warning: may not be fully accessible to screen readers)

Braxton D. Shelley comes to Yale in fall 2021 from Harvard University to teach, continue his path-breaking work as a theorist of African American sacred music, and serve as faculty director of a new interdisciplinary Program in Music and the Black Church housed in the ISM. He is a scholar, an ordained minister, and an experienced church musician who will bring to Yale University much-needed attention to a vital and under-researched musical tradition. In 2016, he was awarded the Paul A. Pisk Prize by the American Musicological Society (AMS) for the best paper by a graduate student, and in 2018, he won the Dean’s Distinguished Dissertation Award from the University of Chicago’s Division of the Humanities. His field-changing article “Analyzing Gospel,” which appeared in the Journal of the AMS, was awarded prizes from all three major American professional societies for music studies: the Einstein Award from the AMS, the Kunst Prize from the Society of Ethnomusicology, and the Adam Krims Award from the Popular Music Interest Group of the Society of Music Theory.

Cheryl Townsend-Gilkes is a sociologist, womanist scholar, professor, and ordained Baptist minister. Currently the John D. and Catherine T. MacArthur Professor of African-American Studies and Sociology and director of the African American Studies Program at Colby College, she holds degrees in sociology from Northeastern University (B.A.,M.A., Ph.D.), has pursued graduate theological studies at Boston University’s School of Theology, and is the recipient of an honorary Doctor of Divinity degree from Ursinus College in Pennsylvania. Several of her journal articles have been reprinted in anthologies such as African American Religious Thought: An Anthology, edited by Cornel West and Eddie Glaude, and Kenneth Aman’s The Border Regions of Faith. Her 2010 essay, “Still the Most Segregated Hour: Religion, Race, and the American Experience” is featured in Patricia Hill Collins and John Solomos’ Handbook on Race and Ethnicity.

Cornel West is a philosopher, public intellectual, political activist, and social critic. The grandson of a Baptist minister, he draws intellectual contributions from Christianity, the Black church, Marxism, neo-pragmatism, and transcendentalism. He has held professorships and fellowships at Harvard University, Yale University, Union Theological Seminary, Princeton University, Dartmouth College, Pepperdine University, and the University of Paris. A socialist, West has focused on the roles of race, gender, and class in American society, and the means by which individuals act (and react) to their “radical conditionedness”. He is the recipient of over 20 honorary degrees and an American Book Award, and has written or contributed to over twenty published books. Among his most influential books are Race Matters (1994) and Democracy Matters (2004).

About the Musicians (Link)