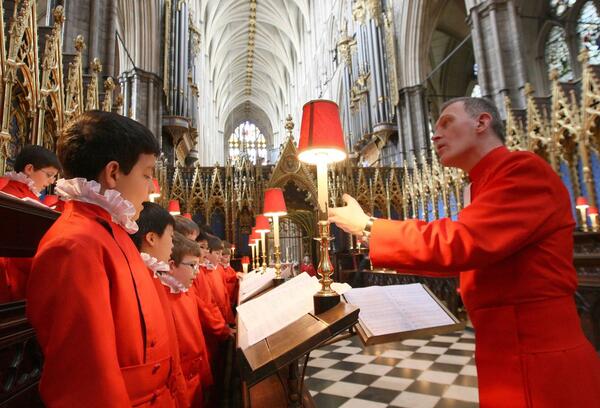 In January, James O’Donnell, a renowned concert organist, choral conductor, and liturgical musician, will join the faculties of the Yale School of Music and the Institute of Sacred Music. In the meantime, O’Donnell has important work to do: On Monday, he directs the music for the state funeral of Queen Elizabeth II at Westminster Abbey.

It’s not the first time O’Donnell has been part of a historic global event. As Westminster Abbey’s director of music since 2000, he has overseen the music for other royal ceremonies, including the wedding of the Duke and Duchess of Cambridge in 2011, the funeral of the Queen Mother in 2002, and the service of thanksgiving for the life of Prince Philip, the Queen’s husband, last year.

“For years, James O’Donnell has led worshipers during some of the most significant world events, both solemn and joyous,” said Martin Jean, director of Yale’s Institute of Sacred Music. “Millions around the world will witness the Queen’s funeral. We feel very privileged to welcome Mr. O’Donnell to the Yale faculty where he will have a chance to share his lifetime of experience with our students, our communities, and the broader public.”

The Queen’s funeral begins at 11 a.m. London time on Monday. It will be the first monarch’s funeral to be held at Westminster Abbey since that of King George II in 1760. It also will be the first British monarch’s funeral service to be televised. The details of the Queen’s funeral, including the music that will be played, were planned years before her death. The content of the ceremony’s music has not been made public.

But, thanks to O’Donnell, a global audience will soon experience it.

“For decades, music from James O’Donnell’s hands and heart, and his Westminster Cathedral and Abbey Choirs, has inspired and comforted millions of people throughout the world,” said Robert Blocker, Henry and Lucy Moses Dean of Music at Yale. “Professor O’Donnell’s return to London to oversee the music of Queen Elizabeth II’s funeral is most appropriate.”

In his current position, O’Donnell directs Westminster Abbey’s music department, serves as its organist, and leads its celebrated choir in daily choral services that feature music from the Middle Ages to the present day.

At Yale, he will teach graduate majors in organ and courses in sacred music more generally. Additionally, he will lead a newly established vocal ensemble that will sing regular choral liturgies in a variety of traditions in conjunction with local parishes, chaplaincies, and other Yale faculty and students. He will also play a significant role in shaping new outreach and collaborations with prominent organists, choir directors, clergy, and theologians around the world.

“I am delighted to have the opportunity to work and teach at Yale,” O’Donnell said in an April statement announcing his joint appointment. “I will, of course, be very sorry to leave Westminster Abbey after 23 years and am deeply grateful for the rich experience, the friendship and support of my colleagues, and the privilege of playing a part in countless memorable occasions. However, after nearly 40 years working mainly in cathedral music, the appointment at Yale will inspire me to draw fully on my experience and skills in new and different ways. I look forward to all that lies ahead.”

As an organ recitalist, he has performed in prestigious concert halls in the United States and around the world. He has appeared as a soloist with many orchestras, including the London Philharmonic, Tokyo Philharmonic, and BBC National Orchestra of Wales. As a conductor, he has worked with the BBC Singers, the Academy of Ancient Music, and the Academy of St. Martin in the Fields, as well as the Yale Schola Cantorum. He has more than 50 organ and choral recordings to his name.

Read the full story on YaleNews.