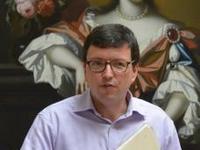 The English Musical Splendor concert tour featuring the Yale Philharmonia, Yale Schola Cantorum, and the Bach Choir, London has been cancelled due to concerns related to COVID-19.

Praise ye the God of Gold: A Cultural History of Walton’s Belshazzar’s Feast

Tim Barringer is Paul Mellon Professor of the History of Art. He specializes in the eighteenth-, nineteenth- and twentieth-century art of Britain and the British Empire, nineteenth-century American and German art and museum studies. Following positions at the Victoria and Albert Museum, the Universities of London and Birmingham in Great Britain, he came to Yale in 1998. In 2013-14 Tim Barringer held a J. Clawson Mills Fellowship at the Metropolitan Museum of Art, New York.

His books include ‘Reading the Pre-Raphaelites’ (Yale, 1998), ‘Men at Work: Art and Labour in Victorian Britain’ (Yale, 2005) ‘Opulence and Anxiety’ (2007), catalogue for an exhibition at Compton Verney, ‘Before and After Modernism’ (Central St Martins, 2010) and ‘David Hockney: 82 Portraits and 1 Still Life (Royal Academy, 2016). In 2018, a new collection of essays ‘Victorian Jamaica’ (co-edited with Wayne Modest) was published by Duke University Press.