The Institute sponsors eight choral ensembles at Yale University. We don’t yet know just what the programming will be, but one thing is sure: the singing we do in 2022–2023 will be in person (at least, as things stand now). We are excited at the prospect of making music together!

Founded by Marguerite L. Brooks in 1985 and now conducted by Felicia Barber, the Yale Camerata is a chorus whose members are Yale graduate and undergraduate students, faculty, staff, and experienced singers from the New Haven community. In fall 2021 the Camerata will hold virtual auditions, and we are hopeful that rehearsals and performances will be in person. 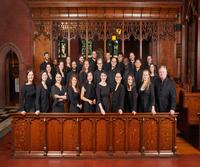 Yale Schola Cantorum, founded in 2003 by Simon Carrington, is a chamber choir that sings in concerts and choral services. Its principal conductor is David Hill;  Masaaki Suzuki is principal guest conductor. Singers receive a $5,500 annual stipend. Schola is open to students from any school or department at Yale. Virtual auditions are open now for altos, tenors, and basses.

Members of the Yale Voxtet are students of Professor James Taylor and are candidates for graduate degrees in voice. The select group of eight singers specializes in early music, oratorio, and chamber ensemble. In addition to performing a variety of chamber music programs each year, the group sings, tours, and records as part of Yale Schola Cantorum.

Battell Chapel Choir, a part of the University Church in Yale, is conducted by graduate choral conducting students and open to all Yale students. The choir sings for ecumenical worship services on Sundays during the academic year and offers two or three additional concerts. Members are chosen by audition and paid for singing in the choir. 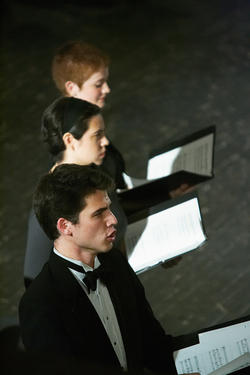 The Marquand Chapel Choir, conducted by graduate choral conducting students, sings weekly for services at the Divinity School chapel. The choir is open to all students and welcomes singers of varying experience. For more information, write to marquandchoir@gmail.com.

The Marquand Gospel and Inspirational Choir (MaGIC), led by Mark Miller, sings twice a month in Marquand services as well as for special services during the academic year. Repertoire comes mainly from the African American sacred tradition, often featuring compositions by the ensemble’s director. Joyful singing, creating community, celebrating diversity, and having fun are the spiritual principles of the ensemble. For more information, write to michael.steibe@yale.edu.

Repertory Chorus and Recital Chorus, conducted by graduate choral conducting majors, give up to six performances per year. Members are chosen by audition and perform an eclectic repertoire in many styles, both sacred and secular. Singers normally elect to receive either credit or remuneration for their participation.

Berkeley Chapel Choir, conducted by Institute students (either divinity or music), is a volunteer ensemble that sings during the academic year for weekly Berkeley Divinity School Eucharist in Marquand Chapel. Repertoire varies, but focuses primarily on the Anglican choral tradition. Section leaders receive remuneration for their participation.

Episcopal Church at Yale (ECY) Choir, conducted by graduate students (either ISM or School of Music), provides music for ECY worship services. Eight members are paid. Open primarily to students from any school of Yale.