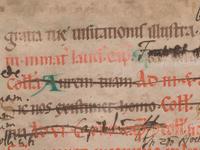 To study the history of the Christian liturgy is usually to study texts. Though some texts survive even from the period of the early Church, it was mostly during the Middle Ages that thousands of texts—prayers, hymns, and lections—were compiled and organized into large and complex liturgical books. Some of these medieval liturgical books continued to be used by worshippers even into modern times, or served as models or anti-models for compilers of post-medieval liturgical books.

When we study these centuries-old documents, it is easy to assume that each text is a straightforward prescription of what was said and done. But liturgical books and texts have served many purposes; those who used them had many reasons. A ritual is, after all, an action or performance—the textual dimension is only one among many. Written texts could explain, record, order, and nuance; they could permit reflection, study, and emendation; they could give substance to otherwise intangible concepts, actions, and traditions, permitting the exchange and replication of practices; they could aid learning and memory; books could be physically carried and used within the rituals they describe; and they could communicate authority, correctness, entitlement, and power. Of course, medieval liturgical texts continued to be read in many ways long after the Middle Ages ended. We too, working in different modern fields, have a wide range of reasons for reading these texts.

Moving beyond the notion that writing was simply a means of coordinating ritual activity, or an alternative to oral transmission, Medieval Rites: Reading the Writing will explore the breadth of possible literate interactions with Christian liturgy during the Middle Ages, in both Eastern and Western traditions.

·      Stefanos Alexopoulos (The Catholic University of America) Medieval Byzantine Scrolls of the Office of Holy Communion: Is Form Related to Function?

·      Andrew J. M. Irving (Rijksuniversiteit Groningen) The Inclusion of the Canon in the Mass Book: Some Preliminary Observations

·      Daniel Galadza (University of Vienna) After Sacraments: Prayers and Blessings for “Various Occasions” in the Euchologion

·      Donna Alfano Bussell (University of Illinois at Springfield) Who do you love? Cistercians and the Magdalene Liturgy

·      Rebecca Maloy (University of Colorado Boulder; Institute for Advanced Study, Princeton) Liturgy as a Form of Exegesis and Education in Visigothic Iberia

·      Ann Marie Caron (University of Saint Joseph, West Hartford) Liturgical Rites and Visionary Texts: The Seasons and Feasts of Liturgical Year in Book One of the Book of Special Grace

·      David A. Michelson (Vanderbilt University) “The Book of Psalms Abounds with Every Other Kind of Book”:  Syriac Monastic Readers and the Divine Office