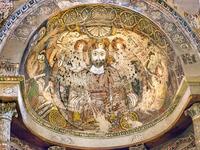 Musings on the Use of the Sanctus in the Shenoutean Federation

Scholars have traditionally believed that the Egyptian Sanctus, as epitomized in the anaphoras of Sarapion of Thmuis and St. Mark, was primarily shaped by Origen’s exegesis of Isa 6. However, recent work by Mary Farag, building off of earlier studies by Bryan Spinks, has pointed to the possible early influence of merkavah mysticism on 4th/5th century Egyptian texts like the anaphoras of St. Thomas (THS) and the anaphora contained in the Barcelona Papyrus (BARC). This influence can especially be seen in the unique throne or chariot imagery used in the Pre-Sanctus of these texts, as well as the slightly later anaphora of St. Matthew (MTH). THS and MTH are preserved in the Great Euchologion of the White Monastery, part of the Shenoutean Federation. While not preserved in the euchologion, BARC is thought to have circulated in monastic centers in Upper Egypt as well. Adding further support to the possible merkavah underpinnings of these texts is the second phase apse iconography from the Red Monastery, dated to 500-550 CE. The iconography depicts Christ enthroned, surrounded by the many-eyed wings of the four living creatures and on the wheeled chariot of Ezek 1. This evidence, alongside the writings of Shenoute, may further bolster claims that merkavah mysticism exerted a significant influence on the Egyptian Sanctus, particularly in Upper Egyptian monastic centers like that of the Shenoutean Federation, in the 4th through 6th centuries.

Nathan P. Chase is the assistant professor of liturgical & sacramental theology at the Aquinas Institute of Theology in St. Louis. Nathan is a recent graduate from the University of Notre Dame’s liturgical studies program. He has contributed a number of articles to the field of liturgical studies, including pieces on liturgy in the early Church, inculturation, and the Western Non-Roman Rites.