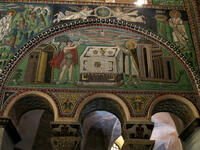 Part of the Historical Studies in Christian Liturgies webinar series.

By late antiquity the eucharist had ceased to have any direct connection to a meal, being now framed by verbal, spatial, material and institutional aspects of ritualization, by theologies proposed though homilies and mystagogy, and by canonical regulation about eucharistic participation. In the period up to the Carolingian reforms, we lose sight of the laity’s eucharistic participation - it is rarely referred to in textual sources and their participation can only be inferred from visual and material sources. The notion of the ‘affordances’ of material objects is a useful tool when considering lay ritual and sensorial experience of the eucharist; this paper will explore what the material and visual evidence suggests about ritual practice in the early medieval period.

Juliette Day is University Lecturer and Adjunt Professor in Church History at the University of Helsinki, and a Senior Research Fellow in Early Christian Liturgy at Blackfriars Hall, Oxford University. Originally from the UK, she studied theology at Oxford, and at Kings College London. and has taught church history and liturgical studies in Oxford, Lampeter and Salisbury. In 2016-17 she was a Research Fellow at the Institute of Sacred Music at Yale University. Her research focuses on the history of Christian liturgy in late antiquity and related issues such as catechesis, and liturgical space. Publications include: The Baptismal Liturgy of Jerusalem (2007), Reading the Liturgy. An Exploration of Texts in Christian Worship (2014); as a contributor to and an editor of Early Roman Liturgy to 600 (Studia Patristica 71, 2014), Spaces in Late Antiquity – Past and Present, Shared and Contested (2016), and The Oxford Handbook of Early Christian Ritual (2018).