The Glagolitic Manuscripts at Sinai 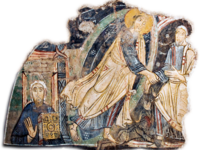 Early Slavic Liturgy at the Crossroads of East and West

This talk explores an enigmatic chapter in the history of the renowned library of St Catherine’s Monastery on the Sinai: the medieval Slavonic books copied in the elusive Glagolitic script. Liturgical in content, these manuscripts represent an early phase of Slavic literacy and religious practice. They also raise a number of intriguing questions, such as the extent of medieval Slavic presence in the Holy Land and early Slavic liturgical identity. Living at the intersection of East and West, the Slavs negotiated between the tugging of Rome and Constantinople, a reality reflected in portions of the Glagolitic corpus that exhibit fluency with liturgical traditions of East and West. More surprisingly, Glagolitic manuscripts include forms of liturgical hybridity unknown among extant medieval sources in Greek or Latin, suggesting that medieval Slavic monks were active agents in carving out a unique liturgical culture. This talk will share how new research methods and technologies are combining forces with comparative liturgiology in order to make sense of the Glagolitic corpus and shed light on the religious history of both Southeastern Europe and the Sinai.

Nina Glibetić is based at the University of Notre Dame, where she is assistant professor in liturgical studies and faculty fellow at the Medieval Institute and Nanovic Institute for European Studies. Her research and teaching concentrates on liturgical studies, and also draws from medieval studies, Byzantine and Slavic studies, and ritual theory. Glibetić has published on a variety of topics, such as the development of eucharistic practices in Byzantium, religious rituals for women at childbirth and miscarriage, and the impact of liturgy on the formation of contemporary national identity. Glibetić has received several fellowships, including membership at the Institute for Advanced Study in Princeton, and fellowships at Dumbarton Oaks (Harvard University) and the Hebrew University in Jerusalem. Glibetić is also part of an international research project based at the University of Vienna that examines the Glagolitic manuscripts discovered in the Sinai through traditional methods and the medium of new technologies. In 2021, Glibetić was appointed by Pope Francis as an Eastern Orthodox consultor to the Vatican’s Congregation for Eastern Churches.