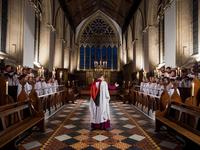 The Choir of Merton College is one of Oxford’s leading mixed-voice choirs and sings the services, during term-time, in the thirteenth century chapel. The choir consists of 30 undergraduates and post-graduates, many of whom hold choral scholarships at Merton College. Tours have included France (2009, 2010, 2011 and 2015) and the USA (2011 and 2014) and Sweden (2013). Recent performances have included Duruflé’s Requiem in the Cheltenham Music Festival, Tallis’s Spem in alium in the Beaujolais Festival, Mozart’s Requiem in St Germain-des-Pres, Paris, Orff’’s Carmina Burana in the St Jude’s Proms, the premiere of David Briggs’s Messe Solennelle in St Paul’s Cathedral and concerts in The Cadogan Hall and St Mary’s Episcopal Cathedral, Edinburgh. The choir plays a leading role in the annual Passiontide at Merton festival, including performances of Bach’s St John and St Matthew Passions and Mass in B minor, Handel’s Messiahand Arvo Part’s Passio. In the 2014 festival the choir gave the premiere of Gabriel Jackson’s The Passion of our Lord, before repeating it a week later at Trinity Wall Street, with Novus NY and the Choir of Trinity Church.

The choir’s debut CD In the beginning features music by Gombert, Weelkes, Holst, Copland and Jackson and was named ‘Gramophone Choice’ in the December 2011 edition of Gramophone.Advent at Merton was released in 2012 and spent six weeks in the Specialist Classical Charts. Merton College Choir regularly broadcasts on BBC Radio 3, and in February 2013 was filmed for the BBC series, Music & the Monarchy.

The 2015/2016 season sees the choir appear in London at St John’s Smith Square and The Temple Church, broadcast on BBC Radio 3, and give a series of performances of Mozart’s Requiem in France and Oxford.

Presented with Trinity Church on the Green