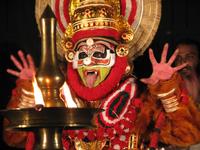 India has a rich theatrical tradition with ancient roots. The classical Sanskrit theater survives today in performance in only one theaterical form, the Kutiyattam, from the state of Kerala in southwest India.  Kutiyattam is recognized by UNESCO as a “masterpiece of the oral and intangible heritage of humanity”.  Once performed only in temples before the temple deity, it is now performed  for audiences on stages worldwide. Kutiyattam performances range from twelve to more than one hundred hours in length and present parts of the famous Sanskrit dramatic classics, often taken from the great epic, the Ramayana. Some of the plays were written by the great kings of Kerala.  Performers study for many years before they are able to master their art.  Nepathya, who will perform at Yale on April 6,  is one of the leading private institutions teaching and performing Kutiyattam.  Headed by Margi Madhu and his wife, Dr. G. Indu, Nepathya endeavors to keep alive this ancient tradition.

The Nepathya troupe from the Nepathya Centre for Excellence in Kudiyattam, operating since 1998, is located in Moozhikkulam, north of Kochi in central Kerala. This group of artists, drummers, and make-up experts is among the finest in Kerala, deriving their inspiration and direct training from famous Kudiyattam performers of the previous generation such as Moozhikkulam Kochukuttan Chakyar and Ammanur Madhava Chakyar. The Nepathya performers are committed to  teaching and preserving the high classical style associated with the great Ammanur tradition. Margi Madhu, the son of Kochukuttan Chakyar and a pupil of Ammanur Madhavacharya, leads this troupe together with his wife, Dr. G. Indu. He also teaches as an Assistant Professor at the Department of Theatre in Sreesankaracharya University of Sanskrit at Kalady and is the recipient of many prestigious awards, including the Sanskriti National Award and the Kerala Kalamandalam Award. The Nepathya artists have appeared internationally in Japan, Israel, Singapore, Italy, Germany, France, England, and the United States and are among the major voices making this ancient art form accessible to audiences outside of Kerala. In recent years, Nepathya, in cooperation with the Hebrew University of Jerusalem and the University of Tuebingen, has been staging full-length performances of the great Kudiyattam masterpieces, rarely seen these days in their entirety.

Presented in collaboration with the Department of Religious Studies, with support from the Lex Hixon Fund and the South Asian Studies Council.