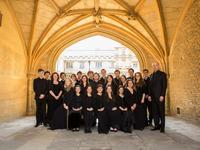 Music of Howells, Parry, Tallis, Williams, and others

Orlando Gibbons:”O clap your hands” and “O Lord, in thy wrath”

Hubert Parry: “My soul, there is a country”

Ralph Vaughan Williams: “Prayer to the Father of Heaven”

Schola Cantorum of Oxford is one of the oldest and most widely known chamber choirs in the UK, having been founded by conductor László Heltay in 1960. It currently comprises around thirty singers, most of whom are students at the University of Oxford. Studying a broad variety of subjects across the humanities and sciences, the choir’s members rehearse during term-time, and regularly perform in Oxford and across the country. Schola Cantorum has developed a noteworthy international reputation, having given concerts in recent years in Argentina, Italy, Israel, Mexico, Poland, Spain, China, Malta and France. In September 2014 the choir plans to visit the USA for the first time since 1989.

Recording and filming are an important aspect of the choir’s work. In 2008, Schola Cantorum recorded music by American composer Randall Thompson on the Hyperion label, and in January 2010 added a recording of works by the Finnish composer Einojuhani Rautavaara to its discography. The choir has frequently appeared on UK and international radio and television, and has featured in several of John Bridcut’s recent BBC films, including The Passions of Vaughan Williams, in commemoration of the 50th anniversary of the composer’s death; Elgar: The man behind the mask; The Prince and the Composer, a documentary on Hubert Parry presented by HRH the Prince of Wales; and Delius: Composer, Lover, Enigma, shown in May 2012 on BBC4, as well as the forthcoming Britten’s Endgame, broadcast in November 2013.
In addition to Schola Cantorum’s regular series of concerts in Oxford, recent highlights have included the opening concert of the Fifth Masevaux International Festival of the Organ, performing with Thierry Escaich, Berlioz’ Roméo et Juliette broadcast on BBC Radio 3 from the Royal Festival Hall in February 2012, and repeating the performance at Le Théâtre des Champs Elysées with Sir Mark Elder. In 2011, the choir was filmed performing Bach’s St Matthew Passion in concert as part of the St Denis Festival; this was broadcast on France Télévisions and later released on DVD on the Soli Deo Gloria label to critical acclaim. In January 2013 the choir performed Haydn’s Creation with the Orchestra of the Age of Enlightenment and Adam Fischer, which was broadcast on BBC Radio 3, and also gave a concert with the OAE of Bach’s Magnificat, Vivaldi’s Gloria and Handel’s Zadok the Priest in St John’s Co-Cathedral, Valletta, Malta. Schola Cantorum is looking forward to the coming season, and the opportunities it will present for appreciating and sharing.

Born in London, James Burton is a graduate of St John’s College Cambridge and the Peabody Conservatory where his conducting teachers were Frederik Prausnitz and Gustav Meier. His recent conducting engagements have included his debut at ENO with Don Giovanni, The Magic Flute for Garsington Opera, and the UK national tour of Bernstein’s Wonderful Town. Throughout spring 2013 he conducted ETO’s new production of Cosi fan tutte and later in the year, he will return to the Metropolitan Opera to assist on the American premiere of Nico Muhly’s Two Boys. James received the Leonard Ingrams Award for outstanding work at Garsington Opera in 2008, and this spring he gave his 7th season of concerts as Musical Director of the St Endellion Easter Festival. He has been Music Director of Schola Cantorum of Oxford since 2002.