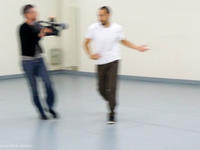 In 2013, Arkadi Zaides requested access to the video archives of B’Tselem - the Israeli Information Center for Human Rights In The Occupied Territories. Among other things, the archives contain thousands of hours of footage documented by Palestinian volunteers within the framework of the organization’s “Camera Project”. Zaides chose to focus on the Israelis depicted on screen, on their bodies and the way they respond to various situations in the West Bank. The results of his confrontation with these materials are presented in two works: ‘Capture Practice’ - a video installation, and ‘Archive’ - a stage performance.

The video installation ‘Capture Practice’ comprises two synchronized video channels broadcasting simultaneously in a loop on two walls that are of human height, thus creating an intimate architectural space. On the right wall, Zaides is filmed within a closed and windowless studio, and on the left, there is a series of clips from the archives. With his gaze continuously facing the left screen, Zaides extracts the movements of the documented subjects, and through the medium of his body ties together the occurrences on both screens. Using a never-ending kinetic practice, Zaides wishes to examine the somatic influence of the occupation on the bodies of those administering it, while raising questions about his own involvement in the act. Although the Palestinian side remains behind the camera, the volunteers’ movements, voices, and perspectives are present, and they dictate the viewing perspective.