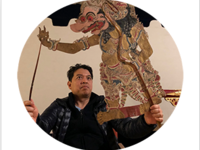 About the dalang (Puppeteer):

Darsono Hadiraharjo is a visiting scholar at Cornell University, as an artistic director of the Yale Community Gamelan Ensemble. Darsono has taught gamelan all over the world, traveling and performing in Europe, Asia and the US. He has been an artist-in-residence at Wesleyan University and Bates College in the past, and has performed and given workshops at Emory University, Tufts University, Smith College, and Brown University to name a few. Darsono is a leading musician at the Mangkunegaran Court in Solo, Indonesia and hails from a long line of a family of puppetry and karawitan traditions from Delanggu, Klaten, Central Java.

Maho A. Ishiguro holds a Ph.D. in Ethnomusicology from Wesleyan University. Maho began her studies of Central Javanese gamelan at Smith College when she was working on her Master’s degree in musicology at UMass Amherst. Currently, her primary research focuses on how localized forms of Islam interact with dance and music traditions in present-day Aceh, one of the provinces on the island of Sumatra, Indonesia. She is also an avid practitioner of various dance forms such as South Indian Bharatanatyam, Central Javanese court dance, and Acehnese dance. She is a lecturer in music at Yale University.