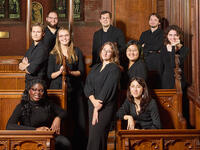 This concert is the culmination of the work the Yale Voxtet has done in their Latin diction and Chant Course. The program is taken from the First Vespers for the feast of the Purification (Candlemas) in plainchant, according to the Solesmes Antiphonale of 1912, with thirteenth-century polyphony from Las Huelgas Codex.

Members of the Yale Voxtet are students of Professor James Taylor and are candidates for graduate degrees in voice. The select group of eight singers specializes in early music, oratorio, and chamber ensemble. In addition to performing a variety of chamber music programs each year, the group sings, tours, and records as part of Yale Schola Cantorum.

The Purification of the Virgin Mary—known earlier as the Presentation of Jesus at the Temple—is an ancient Christian feast dating to at least the 4th century, celebrated on February 2. It commemorates the ritual purification of Mary, 40 days after giving birth to Jesus, as well as the presentation of the Jesus to the priest Simeon, who recognized the infant as the Messiah with the song of praise that begins “Lord, lettest now thy servant depart in peace … (Nunc dimittis servum tuum, Domine . . ) “ (Luke 2:29-32).

This solemn feast marks the end of the liturgical season of Christmas, and is the last day on which the great Marian antiphon “Alma redemptoris mater” (Dear mother of the redeemer) is sung to end the liturgical day. Celebrated with candlelit processions, Purification is also a “feast of light,” when candles are blessed for use by the church and the congregation.

Vespers is a service of the Divine Office, celebrated at sundown, with the chanting of antiphons and psalms at its core. It is a liturgy of thanksgiving, crowned by the Marian canticle “Magnificat anima mea” (“My soul doth magnify the Lord”) (Luke 1:46-55). On important feast days, the Vespers service of the previous evening is designated as First Vespers of the feast, so that, as in Jewish practice, celebration of the feast begins at sundown of the day before. The special solemnity of a First Vespers is marked by longer antiphons with special psalms, as well as more ornate tones for the canticle and other chants. A few of these anticipation-laden “eve” celebrations are still with us as Hallowe’en (All Saints Eve), Christmas Eve, and New Year’s Eve.

Traditionally, Candlemas—exactly halfway between the winter solstice and the vernal equinox—is associated with weather predictions for the agricultural year. There are many traditional Candlemas weather rhymes, like this one:

If Candlemas day be fair and bright, Winter will have another flight.

If Candlemas day be shower and rain, Winter is gone and will not come again.

In their country, they assign this job to a portly rodent rather than to a feast of the church. But the choice of day—whether descended from the Purification themes of light and renewal, or from Neolithic astrologers, or perhaps both—is no coincidence.