Liturgy and the Life Course 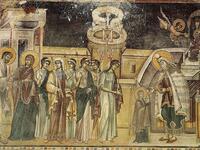 Liturgical research over the past several decades has focused on the history of those rituals that continue to characterize worship in Christian communities today (baptism, the Eucharist, the Divine Office, etc.). Yet medieval manuscripts of East and West include a number of blessings for various stages of the human life course with little to no contemporary corollary. The neglect of such practices within medieval historiography has meant that scholarly constructions of the liturgical past have evaded key data for how liturgy operated within the lives of individuals and their families. This talk will shed light on the practice of liturgical blessings for key stages of human development from childhood through adolescence and thus bring to the fore a discussion of liturgical participants often neglected in scholarship. While the focus will be primarily on the Greek sources of the Eastern Mediterranean world, the paper will also engage the evidence for and implications of such rites in other regions.

Gabriel Radle is assistant professor of liturgical studies at the University of Notre Dame and a fellow of the Medieval Institute. He specializes in early and medieval Christian liturgy, with a particular interest in the Eastern Mediterranean world. His work engages the historical practice of Christianity through the comparative reading of liturgical texts across traditions in dialogue with other source types, including visual and material culture, hagiography, homiletic literature, and legal documents, both canonical and civil. His publications include studies on medieval marriage ritual, Byzantine liturgical manuscripts, and Eucharistic liturgies and practices of East and West. Radle has lectured internationally and held research fellowships at the Yale Institute of Sacred Music, Dumbarton Oaks (Harvard University), the Hebrew University of Jerusalem, Princeton University’s Seeger Center, and the University of Regensburg (Alexander von Humboldt Foundation fellow). His publications have appeared in such venues as Speculum, Medium Aevum, Worship and Orientalia Christiana Periodica, among others. He is currently on leave with a membership at the Institute for Advanced Study (Princeton), where he is working on a monograph project dedicated to life-cycle liturgies for children and adolescents in late antiquity and Byzantium.