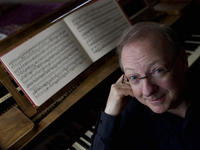 As he embarks on his sixth decade on the podium, Nicholas McGegan — long hailed as “one of the finest baroque conductors of his generation” (The Independent) and “an expert in 18th-century style” (The New Yorker) — is recognized for his probing and revelatory explorations of music of all periods. The 2018/19 season marks his 33rd year as music director of Philharmonia Baroque Orchestra and Chorale and he is also Principal Guest Conductor of the Pasadena Symphony.

Best known as a baroque and classical specialist, McGegan’s approach— intelligent, infused with joy and never dogmatic — has led to appearances with many of the world’s major orchestras. At home in opera houses, McGegan shone new light on close to twenty Handel operas as the Artistic Director and conductor at the Göttingen Handel Festival for 20 years (1991-2001) and the Mozart canon as Principal Guest Conductor at Scottish Opera in the 1990’s. At the same time, he was principal conductor of the Drottningholm Opera in Sweden.

McGegan’s prolific discography includes more than 100 releases spanning five decades. Having recorded over 50 albums of of Handel, McGegan has explored the depths of the composer’s output with a dozen oratorios and close to twenty of his operas. Under its own label, Philharmonia Baroque Productions (PBP), Philharmonia has released almost a dozen acclaimed albums of Handel, Scarlatti, Vivaldi, Brahms, Haydn, Beethoven, and more. Since the 1980s, Nic has released more than 20 recordings with Hungary’s Capella Savaria on the Hungaroton label, the latest being a 2-CD set of the complete Mozart violin concerti.

English-born Nicholas McGegan was educated at Cambridge and Oxford. He is an honorary professor at the Georg-August University in Göttingen and also was given an honorary Doctorate of Music at the San Francisco Conservatory of Music. In 2010, he was made an Officer of the Most Excellent Order of the British Empire (OBE) “for services to music overseas.” He also was awarded the Verdienstkreuz (am bande) from Niedersachsen (Germany) in 2011.

In 2016 he was the Christoph Wolff Distinguished Visiting Scholar at Harvard and is a frequent visitor to Yale.

The Old Testament story of Abel’s murder at the hands of his older brother Cain, as recounted in the Book of Genesis, has captivated composers, artists, writers, artists, and dramatists through the centuries. The themes of sibling rivalry, murderous jealousy, divinely sanctioned evil, and unassuageable guilt resonate no less strongly today than they did in 1707, when Alessandro Scarlatti’s’s sacred oratorio Il primo omicidio (The First Murder) had its premiere in Venice. Scarlatti was preeminently a man of the theater. In Italy, in the late seventeenth and early eighteenth centuries, theater was virtually synonymous with opera. And Venice, the home of Europe’s first public opera house, had long been an operatic Mecca. Between 1679 and 1721, Scarlatti wrote more than five dozen operas for theaters there and in Naples, Rome, and Pratolino (near Florence), becoming one of the most celebrated, as well as most prolific, dramatic composers of his day. Opera was a family affair for the Scarlattis. Three of Alessandro’s seven siblings followed in their father’s footsteps as singers, as did one of his daughters. (His son Domenico, on the other hand, distinguished himself chiefly as a composer of keyboard works.) It’s no coincidence that two of Scarlatti’s operas, Mitridate Eupatore and Il trionfo della libertà, had their premieres in Venice in the same carnival season as Il primo omicidio, or that the oratorio was sung not in liturgical Latin but in Italian, the operatic vernacular.

Although the word oratorio has come to denote a musical genre, it originally meant a place set aside for prayer. Specifically, it referred to the prayer halls attached to churches where, beginning in the mid-1500s, devout Italians gathered for informal spiritual fellowship and refreshment. The music associated with these intimate spiritual exercises ranged from popular hymns to more elaborate narratives based on biblical stories and texts. Over the course of the Baroque era, the oratorio gradually developed into the large-scale religious dramas epitomized by such masterpieces as Bach’s St. Matthew Passion and Handel’s Messiah. (Interestingly, Handel’s librettist, Charles Jennens, at one time owned the original manuscript of Il primo omicidio.) As sacred drama, the Baroque oratorio had much in common with opera. The two genres originated in Italy around the same time, grew up alongside each other, and attracted many of the same composers, performers, and audiences. Indeed, the oratorio had all the musical trappings of opera—arias, recitatives, ensembles, and choruses; orchestral accompaniments and interludes; and so on—but was typically presented in concert form, with no (or minimal) sets and costumes. As such, it offered an acceptable alternative for opera lovers craving entertainment during the penitential season of Lent, when theaters were shuttered, and the periodic bans on theatrical performances imposed by the Vatican’s puritanical religious authorities.

Although Il primo Omicidio is most often presented oratorio style, as in tonight’s performance, it has found a second home on modern opera stages: the Paris Opéra, for example, is set to unveil a new semistaged production in January. Presumably, audiences at the Palais Garnier will not be asked to sit through the edifying sermon that customarily separated the two parts of an oratorio in Scarlatti’s time. Nevertheless, stage director Romeo Castellucci says he intends to foreground the work’s theological dimension and treat the story of the biblical brothers as “an opportunity to think about the meaning of the mystery of evil, because it looks like evil is God’s project.” The printed libretto for the first performance of Il primo omicidio fudged the genre issue by designating it “a sacred entertainment in music for six voices.” In addition to Cain and Abel (sung by an alto and soprano, respectively), the cast of characters includes Adam (tenor), Eve (soprano), and the disembodied voices of God (alto) and Lucifer (bass), accompanied by a small orchestra of strings and continuo.

Part I is preceded by an instrumental sinfonia, or overture, in three parts of markedly different characters; the solo violin’s bravura passagework in the fast outer sections will be a recurring motif of Scarlatti’s work. In a pair of plangent arias, first Adam and then Eve express remorse for their original sin and for the guilt with which they have burdened their two sons. Both arias display the rounded ABA structure favored by Baroque composers. (The so-called da capo aria, with the first part repeated in ornamented form after a contrasting middle section, not only showcased the singers’ virtuosity but allowed the characters to reflect on an emotion or event from different perspectives.) Adam’s anguished outpouring of grief is punctuated by a kind of running commentary for unison violins, while Eve, accompanied only by the continuo instruments (typically, harpischord and cello), implores her menfolk to bear their “just punishment.” Scarlatti inserts a brief orchestral ritornello, or refrain, after the A section of Eve’s aria, extending and amplifying her sighing melisma on the word pena (punishment).

Abel and Cain make their entrances in a pair of arias that illuminate their dissimilar personalities and motivations. As befits a humble shepherd, Abel sings “Dalla mandra un pur agnello” (From the flock a pure lamb) in the lilting 12/8 meter of a pastorale, obscuring the fact that he is proposing to appease the stern Old Testament God with a sanguinary sacrifice. Cain, however, disdains his brother’s high-minded piety. Brushing Abel’s C-major innocence aside, he switches to E-minor to assert his right, as the elder sibling, to sacrifice the “first fruits” of his hard labor as a farmer. Adam bids his sons to stop bickering and counsels them, in a luminous aria accompanied by obbligato cello and violin (“Più dei doni il cor devoto”), that a “devout heart” is more important than offerings in the eyes of the Creator. Whereupon Eve urges the brothers on to the sacrificial pyre, her terse, syllabic phrases blossoming into florid garlands of notes as she prays God to take pity on them for her own sin.

Jagged rhythms in the violins betray the stirring of fraternal strife in the duet “Dio pietoso” (Merciful God), as Cain, aghast at seeing his sacrifice rejected in favor of Abel’s, confesses a shameful lust for vengeance. While Abel proclaims his virtuous desire to worship God, Cain mutters ominously, “You shall die, unworthy brother.” His murderous musings are interrupted by a radiant orchestral sinfonia heralding the majestic alto strains of the Voice of God, who blesses Abel for his offering. In a vivacious triple-time duet, Eve and Adam advise the brothers to bow to divine will, but Satan has other plans. After another sinfonia, this time “dark and agitated,” the low, lubricious Voice of Lucifer insinuates itself in Cain’s ear, spurring him on to the nefarious deed as the violins reprise the stuttering motif that we have come to associate with evil. Cain avows his fratricidal designs in a bravura aria before hypocritically joining his unsuspecting brother in a paean to “fraternal love.”

Part II of the oratorio finds the siblings at rest on the banks of a woodland stream, its waves mirrored in the violins’ rippling sixteenth notes. Cain and Abel respond to this idyllic landscape in the same key, D minor, but in arias of strikingly different characters and emotional affects. When Abel dozes off, drowsily repeating the alliterative phrase “placido posar” ([he desires] to sleep), Cain seizes his opportunity: the “first murder” is enacted in a wordless sinfonia characterized by stabbing rhythmic figures and sonorous peals of thunder. Out of this stormy maelstrom the Voice of God abruptly emerges, curses the fratricide, and condemns Cain to roam the earth forever, friendless and alone (“Come mostro spaventevole”).

Transformed by repentance, Cain accepts his banishment in an aria of uncharacteristic humility (“O preservami per mia pena”), imploring God to “strike me dead for pity’s sake.” But the implacable deity retorts that “to die would be too short a pain” and wills the miscreant to suffer a living hell instead (“Vuò il castigo, non voglio la morte”). After Cain vents his torment in an agitated stretto aria accompanied by leaping violins (“Bramo insieme e morte, e vita”), Lucifer exults in his victory to the martial sound of drumbeat-like figures in the violins (“Nel potere il Nume imita”). This time, however, Cain rejects his “infernal counsels” and bids farewell to his parents in a moving aria framed by sweetly intertwining violins (“Miei genitori, addio”).

Eve and Adam comfort each other in a plaintive duet whose pastoral 12/8 meter recalls Abel’s opening aria. Then, in a riveting coup de théâtre, Scarlatti miraculously revives their slain younger son: in a sparkling, energetic aria (“Non piangete il figlio ucciso”), the Voice of Abel assures his parents that he is “dead to you, [but] alive for God.” The first couple share their grief in a pair of tenderly lyrical laments, after which Adam pleads for “new offspring” to atone for their expulsion from Paradise. The Voice of God grants redemption in a consolatory siciliano aria (“L’innocenza peccando perdeste”), and the oratorio ends with a sprightly D-major duet in which mother and father rejoice in their present happiness and blessed future.