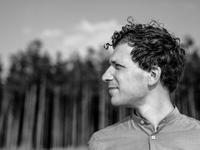 (Note: The work will be performed without an intermission.)

Program Notes:
As a life-long devout Roman Catholic, Messiaen had the ability to rise above the events of his time and view his artistic creations as conversations with a higher power rather than responses  to earthly events.  Captured and held as a prisoner-of-war by the German army in 1940, he composed the transcendent Quartet for the End of Time, inspired by a passage from the Book of Revelation describing the angel who descends from heaven to declare the end of time.  Once Messiaen arrived back in Paris, he found himself in a rapidly deteriorating situation, as Paris fell into German occupation and living conditions worsened. An appointment as a harmony teacher at the Paris Conservatoire provided some stability; the increasing infirmity of his wife, however, was a constant worry. Despite the deprivations of the occupation — food and power shortages, strikes and increasing insurrection — Messiaen devoted his efforts in 1944 to the composition of the Vingt regards sur l’enfant-Jésus for solo piano.
The idea to compose twenty Regards (gazes, glances) inspired by the young Jesus may have been prompted by the poet Maurice Toesca, who asked Messiaen to provide music to complement his twelve poems on the Nativity story.  Although Toesca’s planned publication combining his poetry with Messiaen’s music and artworks by Rouault and Picasso never came to fruition, Messiaen was enthusiastic about providing music for performance alongside the poetry.  His conception grew far beyond the original twelve short pieces, eventually encompassing twenty different aspects of the Nativity in a work of about two hours performance time.  To avoid engaging with the troubling events of the time, Messiaen focused instead on the most important story of his faith, responding with an expansive and meditative artwork. The Vingt regards is a pianistic tour-de-force of virtuosity and sustained profundity, and received a fitting premiere from the young virtuoso Yvonne Loriod, who would go on to become Messiaen’s most devoted follower and interpreter (and, many years later, his second wife).
Much of the musical language in the Vingt regards is typical of Messiaen’s unique and highly-developed style.  Drawing on a range of musical influences from Gregorian chant through to Balinese gamelan, Messiaen created a musical language that rejected much of the directionality and temporality of Western music.  Throughout his life he had a passionate interest in birdsong, in which he admired the constant melodic variety and goalless meandering.  He avoided conventional tonality, regular time signatures and rounded phrasing; instead he experimented with irregular rhythms, and sonorous chromatic chords that could float without direction.  Although his music is often highly complex, it is arranged using blocks and layers rather than conventional melodies or forms. In this piece, as in many others, he used a system of leitmotifs, short musical motifs that stood for a particular concept.  Despite this highly-sophisticated musical language, Messiaen’s ultimate intention in this piece, as in others, was to connect his personal Christian beliefs with the universal language of love: as he wrote in the preface to the score, “More than in all my preceding works, I have sought a language of mystic love, at once varied, powerful and tender, sometimes brutal, in a multi-coloured ordering.”

Since his concerto debut at the age of ten, Latvian concert pianist Reinis Zarins has performed as a recitalist, chamber musician and concerto soloist throughout Europe and North America. Equally at home in classical and contemporary repertoire, his passion lies in the creation of programs and interpretations that explore the deeper reasons and purposes behind music.
Presently resident in London, Reinis Zarins regularly performs in his native Latvia and has won the country’s Grand Music Award three times in the category “Outstanding interpretation”. He also champions the work of Latvian composers: the 2017/18 season sees the release of his third Latvian album, as well as premieres of a new piano concerto and a cycle of piano works written for Zarins by the leading composers of Latvia. Other highlights include being elected the artist-in-residence both for Latvia’s Radio 3 and in concert hall Cēsis with his Trio Palladio.
Laureate of 11 international competitions, Zarins has performed in prestigious music festivals, including Lucerne Festival, Bath International Music festival and Scotia Festival of Music. His thoughtful virtuosity has gathered audiences in Wigmore hall in London, Amsterdam Concertgebouw, New York’s Weill Recital hall in Carnegie hall, and Tchaikovsky Concert hall in Moscow. Zarins has collaborated with leading orchestras, like Moscow Chamber Orchestra, Kremerata Baltica, Ostrobothnian Chamber orchestra, and conductors Pierre Boulez, Peter Eötvös, Pablo Heras-Casado and Diego Masson, among others.
In addition, Reinis’ passion for seeking exchanges of beauty in all art forms brings fruit in various multimedia projects – for example, the show Seasons in collaboration with choreographer Kirill Burlov, as well as MusicPaintingLive project with painter Maryleen Schiltkamp.
After his foundational studies in Latvia, Zarins won several scholarships to refine his talent at Yale School of Music (USA) and the Royal Academy of Music in London. His most important teachers are Boris Berman, Raffi Kharajanyan, Christopher Elton and Renē Salaks.
When away from the piano, Reinis enjoys playing chess with his children and getting lost in the woods.