Mystical Poetry of the Bauls: Presented by Parvathy Baul 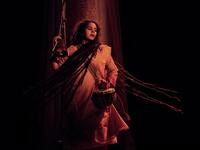 Parvathy Baul will provide insights into the ancient tradition of the Bauls. She will also present and perform some poetry and interact through a Q&A session.

Register for the Zoom Webinar

As the most recognized woman Baul performer in the world, Parvathy Baul is a practitioner, performer and teacher of the Baul tradition from Bengal, India. She is also an instrumentalist, storyteller and painter. In February 2019, she was conferred the Sangeet Natak Akademi Award, a national recognition for her immense contribution to the ancient Baul tradition.

Parvathy has performed in over forty countries, including such prestigious concert halls and music festivals as the Noh Theater in Kyoto, the World Music Center in New York City, the Festival of World Sacred Music in Fez, Morocco, the WOMAD festival in London, and the Melbourne Arts Centre.

The Baul tradition dates back to the early 8th C. AD and has grown weaving together threads from Sahajiya Buddhism, Turkish Sufism and Bengali Hinduism. This powerful musical form has been recognised as a “Masterpiece of the Oral and Intangible Heritage of Humanity” by UNESCO.

Parvathy is a tireless advocate for both the preservation and renewal of the tradition. Baul practice has often been largely limited to men and she has taken it upon herself to dismantle gender barriers more. She frequently uses her international reputation to highlight other, lesser-known master performers, and is passing on training in the traditional Baul arts to women on a scale that has never occurred previously.

Parvathy is now creating a dedicated learning center for the Baul tradition in Bengal. This learning center, Sanatan Siddhashram is named after her Guru, Sri Sanatan Das Baul. Here periodically ayurvedic medical services are provided to neighboring villagers. Village children are also trained in Yoga and music. Since the Covid-19 breakout she has tirelessly enabled support for over 45 families of Bauls and Fakirs in Bengal and Bangladesh.

To support Parvathy’s work at the ashram via a 501c(3) tax-deductible donation please visit: https://sacsouthasia.org/donate-sanatan-siddhashram/