Precarity of Death: Exploring the Boundary between Death and Life in Tibetan Traditions 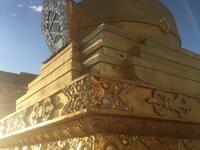 Co-hosted by the ISM and the Council on East Asian Studies, MacMillan Center

What is death? How do reincarnation and the transmigration of consciousness complicate our understanding of death? What role does the body play in the process of death? How have various traditions understood the post-death experience? How are death and life inextricably linked? Using textual analysis, historical excavation and ethnographic inquiry, scholars will present research considering the ways in which death and rebirth are parts of a complex continuity. Rather than thinking of death as a permanent state, a one-way border, this conference seeks to examine the ways in which death is a tactical concept, with ever-changing boundaries and definitions.

Death or No Death: The Ambiguity of the Deloms in Bhutan
Françoise Pommaret, National Centre for Scientific Research & Royal University of Bhutan

When the Death Process Reverses: At What Point Are the Dead Truly Dead?
Alyson Prude, Georgia Southern University

What is the Lifespan of a Tibetan Incarnation?
Gray Tuttle, Columbia University

The Miracle of Yama’s Little Helpers: Problems and Practices of Bodiless Transference in the Kalacakra Tantra
Michael Sheehy,  University of Virginia

Ontological Realities and the Biocultural Nexus of Life in Suspension with Death: Perceptual Cues and Biomarker Diagnostics for the Tukdam State
Tawni Tidwell, Ph.D., M.D.,  Center for Healthy Minds, University of Wisconsin-Madison