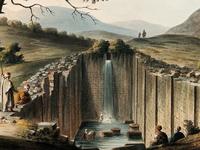 The pre-concert talk scheduled for 6:30 p.m. has been canceled.

Lutheran church music came into its own in the early 1600s, a century after Martin Luther instigated the Protestant Reformation and the concomitant project of forging a distinctive German cultural identity. Yet even as German-speaking Europe declared its independence from the Church of Rome, German musicians continued to look to Italy for inspiration and education. In 1609, for example, Heinrich Schütz’s princely patron in Kassel sent him to Venice to study with Giovanni Gabrieli, who not only gave him a solid grounding in Renaissance counterpoint, based on Palestrina’s exemplary masses and motets, but inculcated a love of the more up-to-date madrigalian techniques associated with Monteverdi. Schütz apparently saw no conflict between his artistic allegiance to Catholic Italy, which he called “the true university of music,” and his staunch Protestant faith. Apart from an early collection of madrigals composed in the first flush of his discovery of the extroverted, melodically rich Italian style, virtually all his surviving music was written either for the Lutheran Church or for religious ceremonies such as weddings, funerals, and christenings. In grafting the expressive freedom of the Italian madrigal onto the rigorous sobriety of the German motet, Schütz hastened the process by which, in the words of the musicologist Friedrich Blume, “Protestant musicians, standing firmly in their own tradition, reforged the formal tools of secular and sacred Italian music and created out of the Lutheran spirit music that became the sound of the Lutheran faith.”

A year younger than Schütz, Johann Hermann Schein displayed a similarly Italianate disposition, even though he never traveled south of the Alps. From an early stage of his career he gravitated toward the so-called seconda pratica, a progressive style characterized by vivid word-painting, expressive dissonances, and free, recitative-like writing for solo voices, in contrast to the densely woven polyphony of the Palestrinian school. As cantor of St. Thomas’s Church in Leipzig, a prominent post that he held from 1616 until his death fourteen years later, Schein was one of Bach’s most distinguished and influential predecessors. His Italian leanings are reflected in both the music and the bilingual title of his 1623 collection Israelsbrünnlein, or Fontana d’Israel (The Fountain of Israel), a collection of twenty-six short, mostly five-voice motets set to German biblical texts in what Schein described as “a special, graceful Italian madrigal manner.” The following year he published a volume of pastoral-themed madrigals featuring his own words (he was also an accomplished poet), in keeping with his practice of alternating sacred and secular genres. The illustration on the title page of Israelsbrünnlein  advertises the work’s hybrid nature: angels holding banners emblazoned with the Latin word “Sanctus” (Holy) look down on a motley assortment of instrumentalists and singers arrayed across the bottom of the page.

On tonight’s program, a baker’s dozen of Schein’s sacred madrigals are interspersed with eight of Schütz’s motets, all but one of which appeared in the two volumes of Kleine geistliche Konzerte (Little Sacred Concertos) that he published in 1636 and 1639. We begin with Schein’s lighthearted Freue dich des Weibes deiner Jugend, whose verses from the book of Proverbs—bowdlerized in Luther’s translation—enjoin us to savor the edifying fruits of marital fidelity; love’s frisky delights are suggested by fast, skipping figures in the inner voices. The music’s winsome gaiety stands in stark contrast to the opening of Die mit Tränen säen, with its mournful, slow-moving chromatic lines. However, grief soon turns to joy in a burst of bright, triple-time homophony, which in turn flowers into lacy counterpoint on the word “Garben” (sheaves). Schütz’s somber Was hast du verwirket, for solo voice and continuo, exemplifies the quasidramatic, speech-like style known as stilo rappresentativo to the forward-looking composers Schütz met in Italy; the music’s pulse is carefully calibrated to the lengths and stresses of the German text (from the “meditations” of St. Augustine). In Zion spricht: Der Herr hat mich verlassen, Schein pairs a reflection on Zion’s plight with an assertion of God’s undying love; the initial quavering figures on the word “vergessen” (forgotten), emblematic of the Israelites’ despair, are transformed first into a question and then into a rousing affirmation. The explicitly dramatic character of Schütz’s Eile mich, Gott, another solo monody, is indicated by his performance marking “in oratorio style”: the “poor and wretched” Psalmist fervently pleads for God’s help in a lucid, syllabic recitative interrupted by a brief instrumental interlude.

The book of Psalms is also the textual source of the next three pieces. Schein’s Ich bin jung gewesen conveys a consolatory message: in the beginning the five voices seem to wander in a contrapuntal maze, moving side by side but seldom meeting; their gradual coming together finally culminates in a unison hymn to piety. The bass soloist in Schütz’s Ich liege und schlafe becomes increasingly energized as the drowsy Psalmist awakes, vigorously traduces his enemies, and invokes God’s blessing in an outpouring of operatic-style coloratura. Der Herr denket an uns again plays on the contrast between busy imitative counterpoint and clear, emphatic chordal textures; Schein reserves the latter for the powerful sixfold repetition of “Ihr seid die Gesegneten des Herren” (You are the Blessed of the Lord). In Da Jakob vollendet hatte he paints a moving picture of Jacob, in Genesis, issuing his dying commands to his children: the Old Testament patriarch draws his feet up into his bed in a slowly rising musical gesture and peacefully expires, upon which the grief-stricken Joseph, his favored son, plants a tender, lingering kiss on his father’s cheek.

Die Seele Christi heilige mich reflects the intimacy of the Communion rite, each of the three singers intoning a phrase of the prayer in turn before they unite to address Jesus directly. Schütz deftly alternates duple and triple meters and textures ranging from one to three parts. Schein’s text-painting skills are displayed in Siehe an die Werk Gottes: witness the quick, turning figure on the word “krümmet” (crumbles) and the harmonic intensification on “bösen Tag” (evil day). The madrigal ends with a helter-skelter fugato, the five voices literally falling over each other as they contemplate the inscrutability of God’s design. Rising scales convey an uplifting, celebratory mood in Ich freue mich in Herren, while Schein’s registral differentiation between lower and upper voices reflects Isaiah’s prophetic allusion to a groom and bride bedecked in the raiments of salvation. Schütz strikes a similarly joyful note in the solo monody Ich will den Herren loben allezeit, whose bravura coloratura flourishes and lightly skipping “Alleluja” refrain amplify the psalm of praise. Praise is likewise the theme of Schein’s Ihr Heiligen, lobsinget dem Herren; its overlapping waves of polyphony accentuate the Psalmist’s poetic contrasts between God’s anger and love, night and day, weeping and rejoicing.

O lieber Herre Gott, for two high voices and continuo, is one of two settings Schütz made of Luther’s Advent collect. (The other, SWV 381, is a six-voice madrigal.) The theme of spiritual awakening is reflected in the duet’s playful imitation; the word-setting is consistently syllabic, apart from key words like “Herre” (Lord) and “Amen,” which are highlighted with florid melismas. Prompted by another of Isaiah’s prophecies, the opening gesture of Schein’s Siehe, nach Trost war mir sehr bange—a dramatic downward leap from E to G-sharp—symbolizes the soul’s anguished yearning for solace, as well as the yawning chasm between heaven and hell, death and life, sin and redemption. In his setting of the Vespers hymn Wann unsre Augen schlafen ein for soprano, bass, and continuo, Schütz contrasts slow, lugubriously descending chromatic lines with rippling passagework depicting the vigilance of the unsleeping heart. Schein’s Ich bin die Wurzel des Geschlechtes David, from the book of Revelation, juxtaposes broad, declamatory proclamations with lighter, faster-moving music depicting the rays of the morning star and the soul’s eagerness to attain grace. The regular phrase structure of Lehre uns bedenken faithfully mirrors the text of Psalm 90, but Schein cuts loose at the end to conjure a vision of eternity in the intertwining melismas on the word “lebelang” (lifelong).

Schütz and Schein were mutual admirers. After the latter died in 1630, at age forty-four, Schütz—who would live another forty-two years—paid homage to his friend in the grand, six-voice funeral motet Das is je gewisslich wahr. Schein himself reportedly chose the text from the First Epistle to Timothy, in which Saint Paul affirms that Christ “came into the world to save sinners, of whom I am chief.” The last verse begins with a  long C-major chord on “Gott” (God) and ends with an elaborately ornate “Amen.” (Schütz toned down the passage’s Italianate exuberance in the revised version of the motet he published eighteen years later, in a collection titled Geistliche Chor-Music.) Our concert concludes, appropriately, with the last madrigal in Schein’s Israelsbrünnlein, and the only one that calls for six voices. A jubilant paean of praise, Nu(n) danket alle Gott combines chordal with polyphonic textures and builds to a rapturous climax as the vocal lines repeatedly climb heavenward on the words “so lange wir leben” (as long as we live).

A program annotator for Carnegie Hall in New York, the Pierre Boulez Saal in Berlin, and other venues, Harry Haskell is the author of several books, including The Early Music Revival: A History, The Attentive Listener: Three Centuries of Music Criticism, and Maiden Flight.