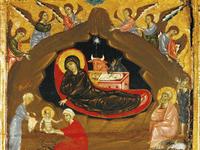 God is with us (A Christmas Proclamation)  John Tavener

England’s greatest composer of the sixteenth century, Thomas Tallis successfully navigated the treacherous doctrinal cross-currents set in motion by Henry VIII’s break with Rome in 1534, Mary Tudor’s bloody reimposition of Catholicism in 1553, and the definitive establishment of Anglicanism as the state religion under Elizabeth I in 1558. As a Gentleman of the Chapel Royal under four successive monarchs, he supplied music for both the Anglican and Catholic liturgies, although he himself remained a devoted follower of the Church of Rome. The Latin-texted Christmas mass Puer natus est nobis (A boy is born to us) appears to have been written in 1554 to celebrate the marriage of Mary Tudor to King Philip II of Spain. Anticipation of an heir to the English throne was running high, making the Nativity theme especially appropriate, although the queen’s pregnancy soon proved to be false. The titular plainsong introit for Christmas Day recurs throughout the mass in various guises (including retrograde, or reverse-motion). In the opening bars of the Gloria, for example, its telltale upward leap of a fifth, followed by a series of meandering stepwise moves, can be heard in the tenor voice (the third from the bottom in the seven-voice texture). Tallis displays his versatile polyphonic technique by blending the older, slow-moving cantus firmus style, in which the foundational plainchant is stated in lengthened note values, with livelier, more up-date imitative part writing. Robust sonorities, coupled with an emphasis on the lower vocal register, give the work exceptional weight and solemnity, in spite of its festive context. Only three of the original four movements have come down to us in reasonably complete form; the fragmentary Credo is omitted in today’s performance.

Although Francis Poulenc’s sensibility was quintessentially Gallic, his style had a distinctively cosmopolitan twist—a quirky blend of simplicity and sophistication, of graceful lyricism and piquant, often acerbic harmonies. Early in his career he allied himself with the circle of irreverently anti-Romantic composers known as “Les Six.” In the last decades of his life, however, he reconnected with the Catholic faith of his childhood. In works like Litanies to the Black Virgin, for women’s chorus, and the opera Dialogues of the Carmelites, his music took on a more overtly religious tone, prompting one critic to describe him as part monk and part rascal. Composed in the early 1950s, these four Christmas-themed motets use medieval plainchant texts to paint vivid sound-pictures of scenes from the Nativity: the Christ-child lying in the manger, the shepherds’ announcement of the Savior’s birth, the star that guided the wise men to Bethlehem, and the angels’ jubilant paean of praise. In Poulenc’s subdued and serenely lyrical setting of “O magnum mysterium,” short melodic phrases, chameleonic harmonies, and passages of wordless humming conjure a mood of muted intensity. The music’s pulse quickens in “Quem vidistis,” as if in eager anticipation, Poulenc’s lightly accented melodies faithfully limning the supple contours of the Latin responsory for Christmas Day. Quietly sparkling consonances in the upper voices evoke the auspicious astral apparition of “Videntes stellam,” while “Hodie Christus” projects a sharp aural image of rejoicing, with its buoyant, incisive rhythms, shifting meters, and exultant refrain “Gloria in excelsis Deo.”

Franz Biebl’s ravishingly beautiful Ave Maria has become a beloved yuletide staple around the world since the Harvard Glee Club and Chanticleer introduced it to American audiences in the 1970s. Of Biebel’s 2,000-odd choral works—mostly undemanding folk-song arrangements and part-songs—it is the only one that has achieved popularity outside his native Germany. (He attempted to replicate its success in a companion setting of the Lord’s Prayer, but audiences never took it to their hearts as they did the earlier piece.) A Bavarian choir director who worked chiefly with amateur musicians, Biebl modestly described himself as “a composer of little songs.” While teaching at the Mozarteum in Salzburg, Austria, he was drafted into the German army in 1943 and spent two years as a prisoner of war in Michigan. The rest of his life seems to have been largely devoid of drama, to say nothing of the spiritual intensity that many listeners have found in his best-known work. According to a publisher friend, Biebl wrote Ave Maria for a firemen’s choir in a town near Munich—hence the original scoring for double choir of tenors and basses that the Schola Cantorum will perform today. Echoes of Renaissance polychoral music can be heard in its multilayered textures and responsorial alternations of phrases, interspersed with solo chants. The devotional Latin text combines the prayers of the Angelus and the Ave Maria. The final “Amen,” a series of ascending scales that resolve on an ecstatic C-major chord, is typical of Biebl’s unpretentious eloquence.

John Ireland’s “The Holy Boy” began its life as the third of four Preludes for Piano. The simple song-like structure of the piece, its reverent lilt, its modality, and above all, its captivating melody have helped to immortalize this piece, which exists in at least sixteen instrumentations. The first of these, transcribed by Ireland himself in 1919, was for organ. In 1938, Herbert S. Brown, the solicitor of Ireland’s estate, wrote the text that has become associated with this tune, with Ireland’s blessings; it begins, “Lowly, laid in a manger, with oxen brooding by, / The heavenly babe is lying his maiden mother by.” Despite their chronology, the text and the version for string orchestra, both of which offer almost intrinsic insights to the piece, shape the interpretation heard today.

A prominent figure in England’s modern musical “renaissance,” Herbert Howells drew inspiration from his country’s rich musical heritage. Vaughan Williams remarked on his “intuitive affinity” with the Tudor masters, as expressed in such artfully archaizing works as the Missa Sine Nomine, composed in 1912 for Richard Terry’s renowned choir at London’s Westminster Cathedral. The spirit of the Renaissance suffuses the Three Carol-Anthems that Howells wrote between 1918 and 1920, while serving as Terry’s assistant on the monumental Tudor Church Music series of scholarly editions. The two men saw eye to eye on the need to restore what they saw as the purity of sixteenth-century polyphony to contemporary church music. Incongruously, Howells composed “A Spotless Rose” against the raucous backdrop of “shunting trucks bumping and banging” at a busy West Country railway depot. Nothing could be more remote from such urban cacophony than the limpid, beatifically billowing lines of Howells’s anthem, set to an anonymous fourteenth-century poem, with its rapturous final cadence that suggests a midwinter thaw. The tenderly lilting strains of “Sing Lullaby,” by the Gloucestershire poet F. W. Harvey, are fortified by an undercurrent of fierce urgency, which in turn rises to the surface in “Here Is the Little Door.” The latter’s text, by G. K. Chesterton’s wife Frances, flirts with a maudlin sentimentality that Howells’s music subtly subverts: its modal harmonies and gentle dissonances are infused with martial ardor as the poet’s allusions to “a keen-edged sword,” “smoke of battle red,” and “the honoured happy dead” recall the carnage of World War I.

Like Howells, Arnold Bax was strongly influenced by the a cappella choral music of Tallis, Byrd, and other Tudor masters, which was revived in the aftermath of World War I by groups like the Tudor Singers, the Westminster Cathedral Choir, and the Orianna Madrigal Society. It was a revelatory performance of Byrd’s great five-part Mass by the Tudor Singers in 1921 that inspired Bax to compose his double chorus Mater ora filium (Mother, pray to the son), based on a fifteenth-century Marian hymn, in alternating Latin and English verses, preserved in manuscript at Balliol College, Oxford. The sound of Tudor polyphony permeates every bar of Bax’s unaccompanied carol. The score is chock full of period-style resonances, from fleeting dissonances thrown off like sparks by the intermittent collisions of as many as eight voices moving independently to soaring descant lines, hollow-sounding parallel fifths, and the mellifluous thirds and sixths that defined the contenance angloise, or “English manner” of composing, in the fifteenth and sixteenth centuries. Texturally, Bax highlights the contrasts between simple, chorale-like homophony (mostly sung with one note for each syllable of text), florid melismas (several notes per syllable), and intricate imitative counterpoint. The anonymous Latin prayer constitutes an increasingly urgent refrain, culminating in a sonorous “Amen” in resplendent G major for the massed choirs. Like Vaughan Williams’s Tudor-inspired Mass in G Minor, written around the same time, Mater ora filium pays tribute to the old masters in harmonic and contrapuntal idioms that are historically evocative, yet palpably modern.

Olivier Messiaen’s La Nativité du Seigneur is, according to Messiaen scholar Jon Gillock, probably Messiaen’s best-known organ cycle. The final movement, “Dieu parmi nous”, or “God among us”, is a striking work; not at all reserved or idyllic, it seeks to grapple with the theological enormity of God’s almighty descent. The piece makes extensive use of Messiaen’s modes of limited transposition, particularly the octatonic mode two, and incorporates Hindu rhythms and birdsong. Messiaen writes of the three themes which he develops, and which are clearly stated in the opening in succession: “First theme and principal theme: a great descent on the reeds of the pedal fortissimo. It is the glorious, unutterable descent of the second person of the Holy Trinity in human form—it is the Incarnation. Second theme of love: it is the Communion. Third theme of joy: it is the ‘Magnificat’ (treated like the song of a bird).” (Jon Gillock, Performing Messiaen’s Organ Music, 90–91.) Messiaen develops these themes until the exuberant toccata, which Messiaen describes as “the piece itself, all the extensive development which precedes being only the preparation.” Messiaen’s final gestures amass tension upon tension, resolving to a thrilling consonance which is then destabilized but finally affirmed by the descending octaves in the pedal.

John Tavener, God is With Us (A Christmas Proclamation)

In contrast to Howells, a deeply conservative musician steeped in the Anglican cathedral choir tradition, John Tavener was a religious seeker of a decidedly iconoclastic bent. The intense, and intensely personal, spirituality that animates his extensive corpus of sacred choral music invites comparison with Olivier Messiaen and Arvo Pärt. Like them, Tavener embraced a wide range of compositional techniques and source material, from twelve-tone music to medieval songs and Slavonic chant. After his conversion to Orthodox Christianity in 1977, the vein of mystical lyricism that had long been present in his music emerged more strongly in such works as Akhmatova: Requiem, inspired by the Russian poet’s elegiac meditations on the horrors of the Soviet gulag; Song for Athene, juxtaposing texts from the Orthodox funeral service and Shakespeare’s Hamlet; and the marathon interfaith all-night vigil The Veil of the Temple. Commissioned in 1987 for the Choir of Winchester Cathedral, God is with us represents the simplified and straightforwardly lyrical style characteristic of the sacred choral music that dominated the composer’s output in the last three decades of his life. The anthem’s English text is adapted from the Orthodox service for Christmas Eve. Tavener’s austere harmonies, consisting mainly of chains of parallel thirds, and chant-like interjections convey a ritualistic and vaguely primitive atmosphere. At the choir’s climactic proclamation “Christ is born,” he ups the sonic and expressive ante by introducing the organ in all its reedy splendor.

A former performing arts editor for Yale University Press, Harry Haskell is a program annotator for Carnegie Hall in New York, the Pierre Boulez Saal in Berlin, the Edinburgh Festival, and other venues, and the author of several books, including The Early Music Revival: A History and Maiden Flight.