Special Theater Event | Everything That Rises Must Converge 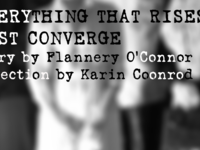 Flannery O’Connor’s apocalyptic comedy lives anew only through Compagnia de’ Colombari. Experience one of America’s top writers through this explosion of text, story, music and dance.

Everything That Rises Must Converge, created for the stage by Karin Coonrod with exclusive permission from the Flannery O’Connor estate, is a tragic-comic theatrical event based on the novel by the same name. Set on a moving bus in America’s deep South, eight actors transform seven chairs into a crowded bus of characters with razor-sharp precision. The result is an interracial, seat-shifting dance that captures the American South in the turbulent, early days of the Civil Rights Movement—and preserves O’Connor and her text as (in the words of Karin Coonrod) “the American Dante.”

Now, more than ever, Flannery O’Connor’s work is timely and timeless.

COMPAGNA DE’COLOMBARI (Company Colombari) is an international collective of performing artists, generating theater in surprising places. Colombari intentionally clashes cultures, traditions and art forms to bring fresh interpretation to the written word–old and new–and commits to using any means possible to flesh it out. Colombari brings performers and audiences together, thereby transforming strangers into community. Colombari is founded on the twin principles that the magic of great theater can happen anywhere and be made accessible to everyone.

KARIN COONROD (Conceiver, Director, Colombari founder) is a theater artist whose work has been seen and heard across the U.S. and around the world. Most recent work includes Babette’s Feast at the theater at St. Clements and Portland Stage, her original play, texts&beheadings/ElizabethR that premiered at Folger Theatre in Washington, DC and headlined BAM’s Next Wave Festival in 2015. She is Founding Director of Compagnia de’ Colombari (2004-present), an international company based in New York City. She has been Artist-in-Residence at The Public Theater in New York, Stanford University, California Institute of the Arts, Gordon College, Harvard University, New York University, Columbia University, and Colgate University. Ms. Coonrod is currently on the faculty of the Yale School of Drama. (http://karincoonrod.com/)