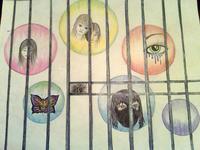 From Prison to Release

Framed by Dante’s journey from Inferno through Purgatory to Paradise, survivors of the criminal justice system recount their journeys from prison to release.

Conceived and directed by Ron Jenkins

The stories you will hear in our performance were written by survivors of the American criminal justice system: Men who have served time in prison and a woman whose father is still in prison. They are all on a journey in search of futures that will transcend the difficulties of their pasts, a journey of transformation. Their stories will be set alongside texts borrowed from another story of transformation:  Dante’s journey from Hell through Purgatory to Heaven as depicted in his “Divine Comedy.” Dante was a survivor of medieval Italy’s criminal justice system. At the dawn of the fourteenth century he was convicted of crimes, forced into exile, and sentenced to death if he ever returned home.

In a letter to his benefactor Can Grande, Dante wrote that the purpose of his poem was “to remove those living in this life from a state of misery, and to bring them to a state of happiness.”  Our performance tonight owes a great debt to a contemporary writer who has a similar goal. In the words of one of tonight’s performers this man “brought hope to the breasts of many lost souls.” His name is Larry White, and after spending thirty-two years in prison he compiled the wisdom of his experience into a prison survival manual entitled “Hope Lives for Lifers.”  Written to provide guidance for men facing decades behind bars, the manual encourages incarcerated individuals to take control of their sentences in a way that will enable them to emerge from prison in better shape than they were when they came in.  It offers the same practical advice that Larry gave in person to the men he met in prison where he advocated for prisoners’ rights, started reading groups, and invited legislators and clergy into correctional facilities to support the struggle for reform. Many of the men you will see on stage were transformed by their encounters with Larry or his teachings when they were in prison, and are now working with the American Friends Service Committee’s Healing Justice Program with the support of Trinity Church Wall Street to make sure that “Hope Lives for Lifers” is distributed to as many prisons as possible.

I have worked with Larry White in New York’s Eastern Correctional Facility as part of his program to disseminate his survival manual. Inside the prison I witnessed the great respect with which he is greeted by men serving life sentences.  Even for men who have never met him, Larry’s work has earned him hero status in the eyes of those working to transform themselves and the institutions in which they are incarcerated.  In recognition of his advocacy for the human rights of men and women behind bars Larry recently received the Gramsci Prize from the International Prison Theater Association, an affiliate of UNESCO’s International Theater Institute.

In Dante’s poem, the gates of hell are inscribed with the words, “Abandon hope, you who enter here,” but Dante’s pilgrim walks past the sign and maintains enough hope to pass through hell and purgatory on his way to paradise.  For many, a life sentence can lead to the loss of hope, but like Dante, Larry White refused to give in to despair, and, now that he has been released, devotes his time to trying to bring hope to the individuals he left behind, or in Dante’s words: “to bring those living in a state of misery… to a state of happiness.” For those who have never been incarcerated it is difficult to imagine happiness without freedom, but Larry’s manual provides a path to achieving a form of freedom behind bars.  He offers practical strategies for individuals who want to take control of their prison sentences instead of being defined by them.

You are about to hear stories by and about men who have taken Larry’s advice to heart, and continue to follow it during the difficult process of reintegrating themselves into the world outside of prison.  At the foot of the mountain of Purgatory, Virgil tells Cato the purpose of Dante’s journey: “He is looking for freedom.”  “Libertà va cercando.”  The individuals whose stories you will hear share that goal: “Looking for freedom.” Even after being released, as they struggle with post-prison trauma, they are, like Dante, and like all of us, still “looking for freedom.”  “Libertà va cercando.”