“Wanting Song, In the Beginning”: A Roundtable on Images of Eden in History, Culture, and the Environmental Crisis 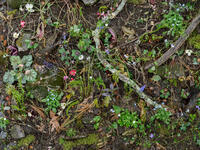 Join us for “Wanting Song, In the Beginning”: A Roundtable on Images of Eden in History, Culture, and the Environmental Crisis. The roundtable discussion precedes the Yale Schola Cantorum concert, “Breath of Earth” at 5 p.m. in Woolsey Hall which includes the world premiere performance of ”Edensongs” composed by Aaron Jay Kernis with Peter Cole as librettist. Focusing on themes of care for the earth, this oratorio was specially commissioned for Yale Schola Cantorum.

The roundtable follows the theme of the enduring image of Eden and the garden. Drawing on their expertise in history, literature, architecture, art, and religion, a distinguished panel of Yale scholars and writers will reflect on the image of Eden and the garden, whether as a site of hope or loss, promise or peril, crisis or sustenance. Moderated by Ryan Darr, the roundtable will begin with brief presentations by the panelists and move quickly to a free-flowing discussion among panelists and audience members. Speakers include: