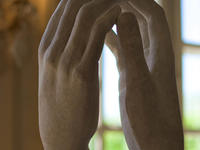 The foremost North German composer of his time, Buxtehude served for four decades as organist of St. Mary’s Church in Lübeck, a prestigious post analogous to the one Bach would occupy in mid-eighteenth-century Leipzig. (As a journeyman organist in Arnstadt, Bach made a pilgrimage to Lübeck in 1705 that cemented his high regard for the older musician.) Although best known for his organ music, Buxtehude also composed in a wide range of vocal genres. Membra Jesu nostri (The Limbs of Our Jesus), completed in 1680, is a cycle of seven short cantatas meditating on different parts of the crucified Christ’s body. How Buxtehude meant this musical passion story to be performed is uncertain, but musicologist Kerala Snyder speculates that all seven cantatas may have been incorporated into a single Good Friday service, set off by spoken parts of the liturgy, in the manner of Haydn’s Seven Last Words of Christ.

The third cantata, Ad manus, is addressed in part “to the hands” of the Savior, here treated allegorically as emblems of both suffering and salvation. The six movements—to be sung, Buxtehude tells us, “wholeheartedly, in the humblest devotion”– combine the spiritual intensity of Lutheran pietism with the richly expressive rhetoric and text-painting of Baroque music. “What are these wounds in thy hands?” the chorus asks after the prefatory instrumental Sonata, highlighting the biblical text with anguished dissonances on the word plagae (wounds). The ensuing three arias—two for solo sopranos and one for alto, tenor, and bass—strike a more consolatory note with their uplifting triple meter and flowing melismas. Hand imagery again figures prominently in the arias’ extracts from the medieval hymn “Salve mundi salutare” (Greetings, savior of the world), and the final reprise of the chorus reinforces Buxtehude’s central theme: the true believer’s unmediated relationship with God.

Samuel Barber remained committed to the time-honored virtues of lyricism and elegant craftsmanship long after his warmly neo-Romantic style had fallen out of fashion. Conservative by temperament and European by orientation, he was neither a committed Americanist like Aaron Copland nor a cosmopolitan innovator like Elliott Carter. But the best of his works have stood the test of time, including his hauntingly evocative setting of Matthew Arnold’s “Dover Beach,” the vigorous, incisive overture to The School for Scandal, and the searingly intense Adagio for Strings. Prayers of Kierkegaard, written in 1954, reflects two of the composer’s newfound enthusiasms:  Gregorian chant and the writings of the freethinking nineteenth-century Danish theologian Søren Kierkegaard. Raised in a Presbyterian-Quaker household, Barber was not overtly religious, but he admired Kierkegaard’s efforts to “[bring] men into a religious relationship with God” irrespective of creed or philosophy. This essentially Protestant focus on the individual believer is at the heart of Prayers of Kierkegaard, originally scored for orchestra, chorus, and solo soprano. (It will be performed today in a reduced orchestration by composer Lee Hoiby.)

Barber wove four of Kierkegaard’s prayers into an uninterrupted, single-movement cantata that blends elements of medieval, Baroque, and modern musical idioms. The simple, subdued opening of “O Thou Who art unchangeable”—a unison chant for unaccompanied tenors, marked “grave and remote”—establishes the mood of introspective reverence that suffuses the entire work. Cued by an allusion to God’s “infinite Love,” orchestra and chorus surge to a resplendent climax that soon splinters into a contrapuntal medley of individual prayers. In “Lord Jesus Christ, Who suffered all life long,” the solo soprano—supported, in Barber’s original orchestration, by the plaintive cooing of oboe and French horn–gives eloquent voice to the “religious melancholy” that Barber discerned in Kierkegaard’s words. The choir’s hushed invocation of “Father in Heaven” marks the transition to the third prayer, which culminates in a massive passacaglia expressive of rapturous longing for “the highest good.” The orgiastic orchestral dance that introduces the final prayer dissolves in a muffled peal of bells, and the concluding chorale affirms the sinner’s faith in God’s saving grace.

Caroline Shaw, To the Hands

Caroline Shaw rocketed to fame in 2013 when she won a Pulitzer Prize for her Partita for Eight Voices, which the jury described as “a highly polished and inventive a cappella work uniquely embracing speech, whispers, sighs, murmurs, wordless melodies and novel vocal effects.” The versatile Yale-educated composer, singer, and violinist has made something of a specialty of boundary crossing and genre bending. Equally at home in classical and pop music, Shaw has written works for the Baltimore and Cincinnati Symphonies, collaborated with rapper Kanye West, and performed with groups ranging from the vocal octet Roomful of Teeth to the early music ensemble Tenet. To the Hands was written in 2016 to a commission from the Philadelphia-based chamber choir The Crossing, which invited seven composers to create works based on Buxtehude’s Membra Jesu nostri. The stated goal of the choir’s Seven Responses Project was to “challenge artists and audiences alike to explore our relative distance from, or closeness to, music across centuries, cultures, and continents.”

To the Hands echoes Buxtehude’s cantata both musically and textually, while placing its consolatory message squarely in the context of the contemporary refugee crisis. The first of its six movements is a quietly meditative vocalise that, in Shaw’s words, “turns the tune of Ad manus into a wordless plainchant melody.” The historical reference becomes more explicit in the second movement when tenors and sopranos sing the Latin words Quid sunt plagae istae (What are these wounds) to the same melody used by Buxtehude. (Commentators on Zecharia 13:6 disagree as to whether the man wounded “in the house of friends” was Jesus on the cross or a nameless farmer.) In the final iteration of the question, Shaw slyly changes “your hands” (manuum tuarum) to “our hands” (manuum nostrum), anticipating the theme of collective responsibility that she develops in the ensuing a cappella choral “riff” on Emma Lazarus’s poem for the Statue of Liberty, here beginning “Her beacon hand beckons.” As Shaw writes, “No wounds are to be found there–only comfort for those caught in a dangerous and complex environment.”

The fourth movement paints a tender portrait of a grandmother poring over old photographs in an empty house, while the chorus intones the mantra in caverna (“in the hollows of the cliff,” as the fourth cantata in Buxtehude’s cycle has it, quoting from the Song of Solomon). Shaw’s poignantly ambivalent image of home, as a place of both refuge and abandonment, carries over into the fifth movement, in which the singers call out the growing numbers of internally displaced persons around the world against a backdrop of pulsing arpeggios. These grim statistics give way to gestures of love and acceptance in the last movement, which, the composer tells us, “unfolds the words in caverna into the tumbling and comforting promise of ‘ever ever’—‘ever ever will I hold you, ever ever will I enfold you.’ They could be the words of Christ, or of a parent or friend or lover, or even of a nation.”

This short, uniformly syllabic setting of excerpts from Jesus’s Sermon on the Mount exemplifies Arvo Pärt’s trademark “tintinnabuli” style, characterized by back-to-basics harmonies, textures, and tempos, with independent lines hovering around triads or sustained pedal tones. The ten verses are punctuated by “grand pauses,” the silences broken only by the soft susurrations of the organ as it slowly climbs, half-step by half-step, from low D-flat to G-sharp. After delivering the “Amen” in radiant A major, the choir drops out, leaving the organ to retrace its harmonic steps in a chain of shimmering arpeggios. Pärt’s radically stripped-down musical language grew out of his study of chant and early vocal polyphony, influences that resonate in the translucent, gently colliding vocal lines of The Beatitudes. Despite his early interest in serialism, the 83-year-old Estonian composer long ago renounced the complexity embraced by classical music’s post–World War II avant garde in favor of what has been called the “new simplicity.”

He prefers to think of his journey as a process of distillation, insisting that “reduction certainly doesn’t mean simplification, but it is the way–at least in an ideal scenario–to the most intense concentration on the essence of things.”

This miniature choral cantata dates from 1814–15, a time when Beethoven was riding the wave of popular acclaim he had achieved with series of crowd-pleasing, but mostly forgettable, works composed for festivities surrounding the Congress of Vienna. The inspiration for Meerestille und glückliche Fahrt (Calm Sea and Prosperous Voyage) seems to have been of a more personal nature: Beethoven had long admired Goethe’s poetry, which he had set to music on numerous occasions, and the two lyrics that comprise this seldom-heard work elicited some of his most charmingly descriptive music. With its subdued, gently lapping chordal motion, “Meerestille” paints a vivid picture of a ship ominously becalmed in waters that are described as todesstill (deathly still). Short-lived climaxes on the twice-repeated word Weite (immensity) lead nowhere, but the seamless transition to “Glückliche Fahrt” brings a welcome breeze that billows through the strings and woodwinds, stirring the chorus to exultation. Excitement mounts steadily until jubilant cries of “das Land,” ricocheting from voice to voice, presage the sailors’ safe homecoming.

Justifiably proud of his creation, Beethoven dedicated Meerestille und glückliche Fahrt to Goethe and sent him a copy of the score when it was belatedly published in 1822. Nine months later, having received no acknowledgment, the composer penned a fawning letter to his hero, saying, “By reason of their contrasting moods these two poems seemed to me very suitable for the expression of this contrast in music. It would afford me much pleasure to know whether I had united my harmony with yours in appropriate fashion.”  We’ll never know what Goethe thought, since he didn’t see fit to reply, but of Beethoven’s inspired union of words and music there can be no doubt.