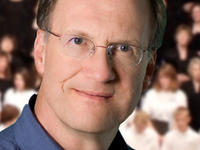 world premiere of a new oratorio

Tranfiguration (world premiere) from Part III of Life unto Life

IV. Beloved
i. Soliloquy: Transfigured
ii. Elijah and Moses
iii. A Voice from the Cloud
iv. All Alone
v. Witness: Listen to Him
vi. Hymn: A Lamp in Darkness

Transfiguration is the final work in a series of six pieces commissioned by the Yale Institute of Sacred Music through the Robert Baker Memorial Fund for Sacred Music. This large-scale project consists of five cantatas concerning miracles performed by Christ and an oratorio on the theme of his Transfiguration. The entire series is being premiered by Marguerite L.Brooks and the Yale Camerata over a four-year period (2013-2017). Together, these works constitute Part III of Life unto Life, an extensive seven-part vocal-instrumental cycle that explores the life of Christ from the Annunciation through the Passion, Resurrection, and Ascension.

Transfiguration is composed in five movements for four soloists, chorus, and orchestra. The hour-long work explores aspects of transfiguration from a variety of perspectives, which ultimately connect Christ’s baptism with water to his transfiguration with light, his “second baptism.” Transfiguration is offered to all listeners in a spirit of hope and possibility, and the understanding that our current journey through seemingly insurmountable challenges is part of a process, which is leading us into the greater light of new life. (Adapted from a note by the composer)

Robert Kyr (b. 1952) has composed twelve symphonies, three chamber symphonies, three violin concerti, a piano concerto, chamber music, and more than 100 works for vocal ensembles of all types. His work often focuses on topics of contemporary significance, such as conflict and reconciliation (peace-making), the environment (living in harmony with nature), and spiritual themes related to love, compassion, and forgiveness. In 2016, his music was recognized by the American Academy of Arts and Letters with an Arts and Letters Award for distinguished artistic achievement. And recently, his Songs of the Soul was premiered and recorded by Conspirare (Craig Hella Johnson, director) on Harmonia Mundi, and was hailed as “a powerful new achievement in American music that vividly traces a journey from despair to transcendence” (Wall Street Journal) and named among the “Best of 2014” by NPR.

Kyr is Philip H. Knight Professor of Music and chair of the composition department at the University of Oregon, where he has developed new models for teaching composition. The program at Oregon is presently one of the largest in the United States, and in addition to teaching, Kyr directs the Oregon Bach Festival Composers Symposium, the Music Today Festival, and the Vanguard Concert and Workshop Series, as well as the Pacific Rim Gamelan. He holds degrees from Yale (B.A., ’74), University of Pennsylvania (M.A., ’80), and Harvard (Ph.D., ’89).