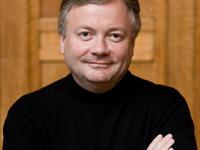 Arvo Pärt (b. 1935) is an Estonian composer who developed his unique voice under the suffocating oppression of Soviet rule. As a student at the Tallinn Conservatory, he composed music in the Neoclassical style and supported himself by supplying scores for film and theater. He later learned twelve-tone technique from illicit manuscripts, but was officially censured when he offered a serial work for public performance. In 1964 he turned to the music of Bach for inspiration; his work from that era juxtaposes Baroque and contemporary styles, and features traditional contrapuntal techniques. In 1968, however, Pärt found himself at an impasse. The music he had composed so far expressed neither his personal identity as a devout Orthodox Christian nor the oppressive circumstances under which he lived and worked. He also faced severe censorship from the Soviet government, which banned his early compositions.

For several years, Pärt dedicated himself to the study of ancient church music, especially Gregorian chant and Renaissance polyphony. Inspired by the simplicity and clarity of this repertoire, he found his voice again in 1976 with the development of the compositional technique that still defines him for audiences around the globe. This technique, named “tintinnabuli” by the composer himself, evokes the ringing of Orthodox church bells. Music composed in this style features a characteristic “tintinnabular voice,” which arpeggiates the tonic triad, and a melodic voice, which moves diatonically in stepwise motion. Pärt’s works in this style are highly serialized, and much of the music is determined by large-scale formal decisions. The tintinnabuli technique produces an unusual collage of consonant and dissonant harmonies, and the resulting soundscape is unique to Pärt’s music.

Pärt’s tintinnabular style culminated in Passio, a work which he had begun to sketch when he emigrated to Austria in 1980. This move followed prolonged struggles with both the Soviet officials, who disapproved of his overtly religious compositions, and the academic establishment, which refused to accept his unadorned, tonal style. Pärt finally settled in Berlin with his wife and two sons, where he completed Passio in 1982. The work marked a shift in Pärt’s focus; upon leaving Estonia, he turned away from the compositions for string orchestra that had established his reputation in favor of sacred settings for choral ensembles.

The complete title of the work is Passio Domini Nostri Jesu Christi secundum Joannem, or The Passion of Our Lord Jesus Christ According to John—a starkness in language that parallels the rigidity and directness of the music. Passio sets the Latin Passion narrative from the Gospel of John, bookended by a brief introduction (Exordio) and conclusion (Conclusio). The role of Jesus is sung by a baritone, while Pilate is represented by a tenor and—most unusually—the narrative task of the Evangelist is assigned to a quartet of soloists. Pärt’s choir gives voice to the crowd, while an ensemble of organ and four solo instrumentalists (oboe, violin, cello, and bassoon) contributes both melodic and tinntinabular lines.

While the emotional impact of Passio is immediate, the work’s underlying structure is rigorous and intellectual; in fact, every note the audience hears in Passio’s seventy minutes is determined by Pärt’s precompositional labor, which took into account both linguistic and theological factors. Each role is assigned a basic rhythmic value: Christ, for example, sings the longest notes, whereas Pilate sings quickly. Additional rhythmic decisions are based on textual qualities, outlined here by choral conductor and Pärt scholar Paul Hillier:

The shifting tonality of the work also reflects the moral foundation of each player in the drama. Christ sings melodically in a low range; his pitch center is E, and his expansive lines are accompanied by a drone and a tintinnabular voice in the organ. In contrast, Pilate sings in a high range and alternates between the melodic and tintinnabular roles. His mode of expression is further destabilized by the fact that his melodic lines center on B while his tintinnabular lines center on F—two pitches separated by the uncomfortable interval of a tritone, which, in addition to sounding harsh to Western ears, has been equated with the devil at various points in history. The choir, like Christ, rests on a pitch center of E, but the melodic and tintinnabular voices outline two different modes, Ionian and Phrygian, which results in a frequent, grating dissonance between G natural and G sharp.

The basic structure of Passio reflects that of John’s narrative, but Pärt gave careful thought to the division of the Evangelist role between his four soloists. He parses the narration into four equal sections of fifty phrases each, plus a concluding section of ten phrases. Each section opens with a different solo voice, which is joined by each of the instruments and vocalists in turn until all eight soloists are contributing to the texture. The melodic line is always carried by the alto and bass voices in collaboration with the oboe and bassoon, while the tintinnabular countermelody is provided by the soprano, the tenor, the violin, and the cello.

Pärt has recently been described as a “mystic minimalist:” mystic because he evokes the sounds and values of his Orthodox faith, and minimalist because he greatly restricts the musical materials at his disposal. Passio is the work in which these two values intersect with the greatest degree of rigor and profundity. While Pärt’s application of his unique compositional techniques might be described as pedantic and artificial, his product can only be described as transcendent.