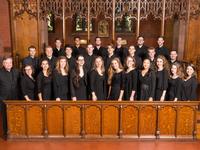 presented in collaboration with The Juilliard SchooL

Beethoven’s Mass in C major has always dwelt in the shadow of his later setting, the Missa Solemnis. All the same, it is a remarkable masterpiece of the middle period, composed alongside the Fifth Symphony and considered highly by the composer. Haydn has long been admired for his extraordinary sense of humor, which is displayed at its finest in the “Surprise” Symphony. Composed for his first concert series in London, Haydn designed this symphony to give his audience a shock and put over his premiere in the face of stiff competition from a former student. ~ Esther Morgan-Ellis

When David Hill and Professor Martin Jean commissioned me to write a substantial sacred work for Yale Schola Cantorum, I was keen to find texts that would have some geographical and historical relevance both to this Connecticut, student choir and to me as an English composer.  I was therefore pleased to discover poems by writers who belong to New England and yet have transatlantic history too; Anne Bradstreet was born in Northampton and emigrated with the early Puritans to Massachussetts in her late twenties.  Phillis Wheatley was seven when she was taken from North Africa to serve as a slave and James Pennington was born into a slave family in Maryland.  Education saved them both from a life of slavery and Pennington became the first black man to be admitted to Yale.  The Quaker abolitionist, John Greenleaf Whittier was born and died in Massachussetts; for us English, he is most fondly remembered for his words to the ever popular hymn ‘Dear Lord and Father of Mankind’.

Having found my texts, I began to think about form, as a twenty minute unaccompanied piece is quite a challenge to sustain.  I was aware that I would need to vary the texture considerably, also allowing me to showcase the vocal talent and musicianship within the choir, and I began to fantasize about some sort of symphonic structure for the work as a whole.  However, I soon realized that it was counterproductive to marry an abstract formal concept with the existing shape of each poem and so I reconciled myself to writing each piece with a loose, madrigalian sense of form – one dictated by verse structure and content.

The piece deals with the subject of mankind and humanity.  This piece was written at a time when global news was filled with stories of terrible racial and religious division, violence, unimaginable brutality and a gnawing sense of dread.  Perhaps it was ever thus…  So it is that the first movement of the piece reflects such a mood in its tortuous harmonies and pained outbursts, as Whittier’s plea from centuries ago for real brotherhood amongst humanity cries ever more desperately.

The contrasting slow movement comes in the form of a nocturne as Bradstreet seeks divine inspiration for calm and fulfillment.

The third movement, the scherzo of the ‘symphony’, is something of a reminder of women’s essential place in ‘Man’-kind.  The lively, three-part upper-voice texture contrasts with something perhaps a little more rough-hewn in the combined lower voices, whose message is still as full of hope and wonder.   The final, published poem lacks its dedication to a Mr Galloway (about whom there is no record) and his name appears only as G——; however, this earlier draft contains his full name in the text.

The finale is a tour de force for the choir; in multiple parts and at a heady pace, the singers declaim a poem found at the end of Pennington’s book ‘The Fugitive Blacksmith’, an account of his flight from slavery and regeneration into America society.  The poet is listed only as ‘a friend of the author’; I have selected several of the verses for musical setting.  It is sometimes difficult in this cynical age to take hope and inspiration from such words and yet Pennington’s story expresses something of the American ideal, a concept with which the English often have trouble grasping.  I hope, however, that American audiences in general and these youthful performers in particular, will have no such reserve in responding to the words and sentiment, especially of the last verse.

Madeleine L’Engle’s poem Shout Joy! bursts with gratitude, energy, and whimsy.  It offers an unabashed moment of ecstatic worship in the spirit of the joyful Psalms.  My setting of this poem seeks to honor L’Engle’s clear and beautiful expression.  The pushing and pulling of tempos capture her spontaneous utterances.  I am particularly drawn to her refrain of Jah!, which simplifies the traditional Alleluia! into a single syllable shout.  Madeleine L’Engle’s poem is used with permission by the Edward Necarsulmer IV Literary Management LLC and the L’Engle estate.