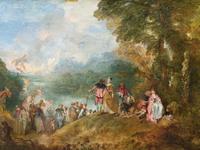 Music and politics were inseparably intertwined in seventeenth-century France. Louis XIV and his father, Louis XIII—who reigned in succession for over a century, from 1610 to 1715—used music both as propaganda for their absolutist regimes and to keep their restive courtiers entertained. In addition to being munificent patrons of the arts, both monarchs were accomplished musicians and dancers: shortly after his accession to the throne, the teenage Louis XIV starred in an elaborate courtly spectacle called Ballet de la nuit (Ballet of the Night), dancing the role of the Sun. As the undisputed musical capital of Europe, Paris–and the satellite court that the younger Louis established at Versailles in the 1660s–attracted ambitious musicians from far and wide, including all three composers on tonight’s program.

The first to arrive, in 1624, was Étienne Moulinié. A native of Narbonne, he followed in the footsteps of his older brother, a chorister in the Royal Chapel, and soon secured an appointment as maître de musique to the king’s younger brother, the Duke of Orléans. Henry Du Mont was still an obscure journeyman in Maastricht when the eminent theorist Marin Mersenne eulogized Moulinié as an exemplary song writer in his Harmonie universelle of 1636-37. Du Mont launched his Parisian career in 1643 as a humble church organist and rose through the ranks of the royal household to achieve the exalted title of compositeur de musique de la chapelle royale. No such prestigious preferment awaited Marc-Antoine Charpentier when he returned to his birthplace in 1670 after a period of study in Rome. But his ties to the wealthy Guise family and other powerful patrons in the French capital guaranteed a flourishing career as a composer of religious and theatrical music, including a long and fruitful association with the Comédie-Française.

More than geography, Du Mont, Moulinié, and Charpentier shared a common birthright in the supple lyricism and refined elegance that distinguished seventeenth-century French music from the virtuosic brilliance of the contemporary Italian style and the learned contrapuntal style cultivated in Germany. Their music, both vocal and instrumental, is steeped in the subtle rhythms and stresses of the French language. As Jean Le Cerf de la Viéville would later write in a famous treatise, the French composers’ secret was “to apply such proportionate tones to the words that the verse is indistinguishable from and lives again in the music. This carries the feeling of all that the singer says right to the heart of the listener. Voilà, this is what we call expression.” Coupled with this attentiveness to musical prosody was a propensity for delicate ornamentation, the musical equivalent of the elaborate flourishes that characterize Baroque art and architecture. Not merely decorative add-ons, such ornaments, or agréments, are intrinsic to the expressive power of French Baroque music.

As composer to the Royal Chapel, Du Mont produced the requisite quota of grands motets for large choirs and orchestra, as well as more intimate petits motets. In the Dialogus de anima (Dialogue Concerning the Soul), likely written in the 1660s, he attempted something different and comparatively new: a dialogue motet, a vocal genre popularized earlier in the century by composers such as Giovanni Francesco Capello, Heinrich Schütz, and Giacomo Carissimi. Set to texts of a contemplative or moralizing nature, often drawn from the Bible, these small-scale sacred dialogues (in vernacular languages as well as Latin) were suitable for private devotions and served to dramatize various aspects of spirituality, much like contemporary Italian oratorios. Indeed, the composer and collector Sébastien de Brossard, whose manuscript copy of the Dialogus de anima is our sole surviving source for Du Mont’s work, described it as “an excellent type of oratorio, or dialogue between God, a fisherman and an angel, etc., followed by the most beautiful five-voice chorus.”

Du Mont’s musical and dramatic scheme is simplicity itself: three short instrumental symphonies for two violins and continuo are interspersed with extended narratives for one, two, three, or five singers. In the first vocal section, a miniature dramatic scena for tenor and bass, the wretched “fisherman”–none of the roles is actually named in the score—abjectly throws himself upon the mercy of a sternly vengeful God, crying, “My soul is in pain and my spirit is bitter.” The second symphonie, more animated than the first but no less affecting in its plaintive G-minor tonality, introduces a trio of angels (soprano, high tenor, and baritone) who exhort the sinner to seek God’s pardon without delay. This is followed by a second vocal dialogue during which the sinner repents and God forgives, their voices overlapping at the end in beatific reconciliation (“Because he is good and his pity will come and not tarry”). After the third symphonie, characterized by lighthearted imitation, the full ensemble assembles in a jubilant chorus that begins in transparent homophony and flowers into a profusion of lacy counterpoint.

Moulinié’s employer, the Duke of Orléans, was a notorious bon vivant with a penchant for intrigue—he was twice forced into exile for rebelling against Louis XIII’s formidable prime minister, Cardinal Richelieu–and a taste for fashionable airs de cour. As the duke’s house composer, Moulinié at first devoted most of his creative energy to these simple, strophic songs, though, as Mersenne observed, his sense of melody and rhythm was extraordinarily sophisticated. In time, however, he grew tired of such frivolity and presented a more serious side of his art to the world in a collection of thirty-six polyphonic vocal pieces in French and Latin, with Italian-style continuo accompaniments. Published in 1658, the Meslanges de sujets chrestiens (Miscellany of Christian Subjects) illustrates the vividly expressive style that set Moulinié apart from many of his compatriots. Evidently anticipating criticism from his more conservative colleagues, the composer issued a “trigger alert” in his preface, warning that some passages in his music “made use of certain effects … which are rather bold and which may pass for licence in the opinion of those who prefer the austerity of the old style to the agréments of the new.”

In fact, Moulinié’s Cantique de Moÿse (Canticle of Moses)—set to an eighteen-stanza poetic paraphrase of Exodus 15 by Bishop Antoine Godeau, a literary-minded churchman who was instrumental in founding the Académie Française—is scarcely bolder in its “effects” than the music of Du Mont (who, as it happens, had published his own Meslanges a year earlier). Yet at a time of mounting tension between partisans of French and Italian music, Moulinié’s use of madrigal-like word painting, Italianate suspensions, and polyphonic textures was bound to raise eyebrows. In setting the eighth stanza of Godeau’s poem, for instance, he depicts the miraculous cessation of wind and waves with dramatic silences, and the resulting abyss with a wrenching shift of note values and harmonies. At the same time, Moulinié’s scrupulous respect for Godeau’s elegantly crafted alexandrines–two half-lines of six syllables each, punctuated by a word break–shows his true French colors. He said he wanted to do for music what the bishop had done for poetry: to restore “its first purity by enclosing it within the rules of modesty, to make the prostitute that she was into a Vestal virgin and a nun.”

Charpentier, too, demonstrated a keen theatrical sensibility in the incidental music he wrote for Molière’s Le malade imaginaire and other plays, as well as in Médée, which has taken its place alongside Lully’s tragédies en musique as a masterpiece of French Baroque opera. His dramatic skills are equally apparent in his many religious works, ranging from masses to liturgical lessons and psalm settings. Composed around 1680, Sacrificium Abrahae (The Sacrifice of Abraham) is one of some two dozen oratorios, or dramatic motets, that Charpentier wrote while serving as composer in residence for the music-loving Marie de Lorraine, whose palatial Parisian home, the Hôtel de Guise, housed a small artists’ colony. An accomplished singer as well as a composer, Charpentier frequently performed in his own chamber operas as a haut-contre (high tenor), a distinctively French voice type that he also featured in Sacrificium Abrahae and other sacred works.

In dramatizing the biblical story of Abraham and Isaac, Charpentier structured the Latin libretto as a series of solos, duets, and choruses according to the conventions of the French histoire sacré. (Like other works in the oratorio genre, Sacrificium Abrahae may have been intended for performance during Lent, when theaters were closed.) The narration is sung either by an anonymous soloist, as in the brief opening number, or by an ensemble, while the dramatic “action” takes place in a series of solo speeches sung by named characters. Musically, the work revolves around two extended duets for Abraham and Isaac, the first expository and somewhat perfunctory, the second joyous and ornate. Charpentier’s mellifluous score includes some nice dramatic touches; when the angel stays Abraham’s hand, for example, he echoes the music God had used in ordering him to sacrifice Isaac. For the most part, however, Sacrificium Abrahae focuses less on the tragedy of sacrifice than on the uplifting message of the final chorus: “Blessed are they who fear the Lord, blessed are they who obey his voice.”

A former music editor for Yale University Press, Harry Haskell is a program annotator for Carnegie Hall in New York, the Pierre Boulez Saal in Berlin, and the Edinburgh Festival, and the author of several books, including The Early Music Revival: A History and Maiden Flight.