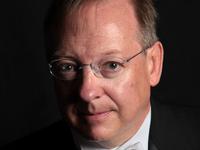 Music of Morley, Campion, Tomkins, Lawes, Lanier, Humfrey, Purcell, Locke, and Pepys – from the time of Charles I and from the Restoration theatre.

Entrance to the performance space is just beyond the main entrance to Yale Divinity School. Ushers will be standing by to direct you.

As he embarks on his fourth decade on the podium, Nicholas McGegan, hailed as “one of the finest baroque conductors of his generation” (London Independent), is increasingly recognized for his probing and revelatory explorations of music of all periods. He has been Music Director of Philharmonia Baroque Orchestra for 28 years, and was Artistic Director of the International Handel Festival Göttingen for 20 years (1991–2011). Beginning in the 2013-14 season he took on the title of Principal Guest Conductor of the Pasadena Symphony, and in 2014 becomes Artist in Association with Australia’s Adelaide Symphony. His approach to period style — intelligent, infused with joy and never dogmatic — has led to appearances with major orchestras: including the New York, Los Angeles, and Hong Kong Philharmonics; the Chicago, Milwaukee, St. Louis, Toronto and Sydney Symphonies; the Cleveland and the Philadelphia Orchestras; and the Northern Sinfonia and Scottish Chamber Orchestra, where his programs often mingle Baroque with later works. The coming months will feature collaborations with the New Zealand and Tasmania Symphonies, as well as Washington, D.C.’s National Symphony Orchestra, Italy’s Orchestra of Padova Veneto, Sweden’s Svenska Kammarorkestern, the Bournemouth Sinfonietta, the Orchestra of St. Luke’s, and Caramoor International Music Festival. He is also at home in opera houses; in addition to shining new light on close to twenty Handel operas as the Artistic Director and conductor at the Gottingen Festival, he has led productions for leading companies including Covent Garden, San Francisco, Santa Fe and Washington. He was Principal Conductor at Sweden’s famed Drottningholm Theatre from 1993-1996. English-born Nicholas McGegan was educated at Cambridge and Oxford. He was made an Officer of the Most Excellent Order of the British Empire (OBE) “for services to music overseas.” Other awards include the Halle Handel Prize; the Order of Merit of the State of Lower Saxony (Germany); the Medal of Honour of the City of Göttingen, and a declaration of Nicholas McGegan Day, by the Mayor of San Francisco in recognition of his work with Philharmonia Baroque. In 2013, the San Francisco Conservatory of Music awarded him an honorary degree of Doctor of Music. His extensive discography includes seven recent releases on Philharmonia Baroque’s label, Philharmonia Baroque Productions (PBP), including Brahms Serenades; Beethoven Symphonies nos. 4 and 7; Berlioz Les Nuits d’été and Handel arias with Lorraine Hunt Lieberson; Haydn Symphonies nos. 88, 101 and 104 (nominated for a GRAMMY® Award); Vivaldi The Four Seasons and other concerti with violinist Elizabeth Blumenstock, and Handel’s Atalanta and Handel’s Teseo, both featuring soprano Dominique Labelle.