There are many “official” ways to remember a colleague like John Cook, who perhaps more than anyone else in the United States fostered the study of the arts in theological education, first as a teacher at the Divinity School, then in conjunction with the Institute of Sacred Music as its director, and finally in his capacity as president of the Henry Luce Foundation. A CV or an obituary can capture the highlights of his achievement – a legacy of classes taught, programs built, conferences organized, and a decades-long conversation about the place of the arts in the life of seminary and church. But what a colleague and friend like me can offer in addition is a sense of what it was like to enjoy his gifts first hand and over time.

And “joy” is in fact the first thing that comes to mind when I recall our years together at Yale, where we co-taught with David Kelsey an interdisciplinary course called “The Artist as Theologian.” Joy pervaded his teaching, as the slides quickly made their way across the screen and the commentary ranged energetically from description, to analysis, to provocation. (What did a building make possible or prevent from happening? How could drapery, in a sculpture or a painting, reveal the body it was supposedly covering up? “Try a little harder to see more in what you are looking at. What do you see?”). An alumna of his yearlong Christianity in the Arts course back in the early 1980s confesses that among the great losses incurred in a recent house fire was the destruction of all of her YDS class notes. She relied on them not only to keep her in touch with the material of John’s lectures but with the pleasure of his delivery, the enthusiasm that seemed always to motivate him.

That enthusiasm was even more on display in the European study tours that he arranged not only for faculty and students but for townspeople who signed on after hearing how remarkable these trips were.  Architecture was what charmed him most, and he would not let protestations of jet lag or tourist fatigue prevent us from taking in the mosaic marvels of Ravenna or Venice’s San Marco, the massive piers of Durham cathedral or the fan vaulting of King’s College Chapel in Cambridge, the rebuilt Coventry, the abbeys in the south of France. He had a genius for the quick in situ lecture that somehow included everyone. On more than one of these trips someone likened him to the Pied Piper of Hamelin. Where he led, we followed. 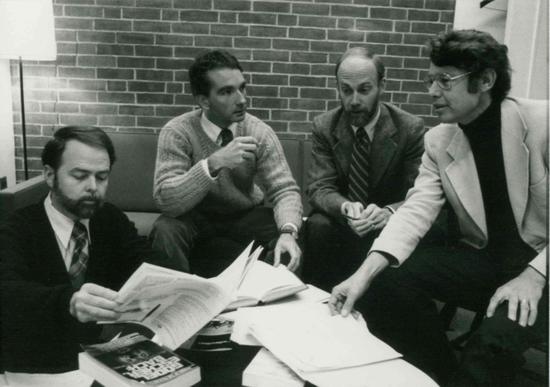 I owe so much to John personally. He was the chair of the YDS search committee that in 1976 chose me as the first to be appointed in Religion and Literature; a decade or so later, as director of the ISM, he revitalized and secured the Religion and Arts Program itself by bringing it under the auspices of the ISM; in the mid-90s I was awarded a Theology and the Arts fellowship from the Luce Foundation, which made possible the completion of my Dante’s Testaments: Essays in Scriptural Imagination. More than for these professional gifts, however, I owe John gratitude for the sheer fun of knowing and working with him. I treasure memories of his discreetly rolling his eyes when someone went on too long at a faculty meeting or when anyone waxed pompous. His laugh had an explosive quality to it that was infectious, but it was his production of a “serious look” that was even funnier to behold. Aside from being the beneficiary of his merriment, however, I owe him whatever sensitivity I have to the visual world he opened up to me. Insofar as I can feel a building, read a painting, or engage a piece of sculpture it is because he gave me what Scripture calls “eyes that see.” As much as he was my colleague, he was also my teacher.

Photos | Header: Cook, Robert Baker, Harry Baker Adams, Margot Fassler, and Aidan Kavanagh in an undated photo. Above: Cook, Peter Hawkins, Jon Bailey, and David Kelsey at a planning meeting for “The Artist as Theologian.” Below: Cook lecturing in an undated photo.

Like Peter Hawkins, I number among the many hundreds of beneficiaries of John’s teaching. As a student in his classroom, I came to know John long before I became a junior colleague in the field. In fact, I came to Yale Divinity School precisely because of John W. Cook, who had come to Hiram College to lecture on religion and the arts in the fall semester of my senior year, just as I was despairing of ever finding an academic institution that would allow me to continue training in what I understood to be my two primary (and, for me, overlapping) fields: religious studies and history of art. Almost immediately upon arriving in New Haven, I became a recipient of the fruits of John’s grant-writing skills, as one of his grants put me to work typing up his lectures from audiotapes he made of each class. I was a terrible typist and worked slowly, but this is where I learned to think carefully about the structure of a lecture, not just as a list of important points worth imparting, but as a meaningful assembly of information, narrated with clarity as well as energy and enthusiasm – and giving students something to think about, and to think with, in their own encounters with objects, buildings, monuments, and spaces.

John Cook, like Jane Dillenberger in the generation before him, brought the discipline of art history to bear upon the study of religion and the visual/material arts. For John, this meant pursuing a Ph.D. in history of art from Yale University, which was conferred in 1973. Such expertise now seems fairly commonplace, and represents current practice at the ISM (faculty who teach art history at the ISM are academically credentialed art historians). It was an unusual approach, though, when John began and then shaped his professional vocation. In fact, this interdisciplinary specialization of “religion and the arts” took shape over many decades’ time, beginning as a primarily theological enterprise taught largely by theologians or church history scholars who also loved the arts and viewed art objects as media of religious communication and communion. John’s position, from the start, was always that the study of art from the perspective of religion in general, and in the context of theological education in particular, deserved the very best that art history had to offer as well as the best from the theological and religious studies sides of the scholarly collaboration. Especially given John’s later position as president of the Henry Luce Foundation, a powerful and generous philanthropic organization with commitments to the arts as well as to theological education, John’s thinking in this regard was far-reaching and forward-looking. My scholarship, like Peter’s, was facilitated by Luce’s largesse (though we each – rightly – had to compete with other stellar applicants and projects for the Foundation’s attention). 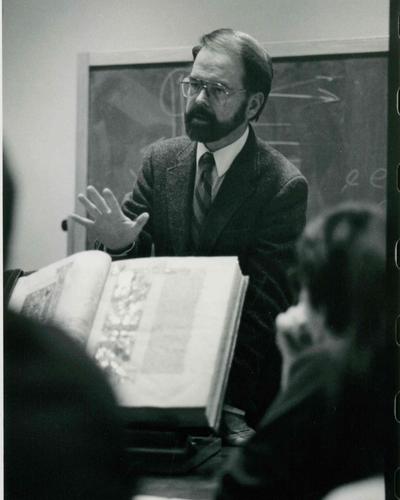 John taught me a lot during my short years as a student at Yale. Several important things come immediately to mind. First, by example, he cemented my conviction that my research and teaching specialiJozation could claim a legitimate place in the academy, that it was possible to do meaningful work at this intersection of art history and religious studies. Second, he was a teacher who firmly believed that the chief aim of pedagogical practice is not to replicate oneself, one’s opinions and approaches, but rather to help students find their own expertise and their own best voices. I’m certain that the objects I study, and the ways I think about the shape of this interdisciplinary engagement of fields, have sometimes seemed peculiar and even puzzling to John, given his own emphasis on fine art and connoisseurship. He nonetheless encouraged me, supported me, and celebrated my work. The Center for the Study of Material and Visual Cultures of Religion (mavcor.yale.edu) largely exists because John taught me to dream my own dreams and follow my own visions for collaboration. Third, and another place our paths truly intersected, was his direct engagement of objects, his sense of the importance of seeing and experiencing for oneself, his inclination to teach the study of art and architecture as “embodied” practices long before that terminology gained currency.

This is a personal tribute as well as a professional one. When I first arrived at Yale, feeling far from home and a bit out of my league (like so many who are new to this university, especially those of us who were first generation college students), John and Phyllis gave me a New Haven family by inviting me into their household as a babysitter for their children. Just a couple short months later, I first met Roger Fallot, my beloved partner of almost forty years now, when he accompanied a friend of his (another student in John’s class) on a field trip John led to the Metropolitan Museum of Art and The Cloisters.

I am humbled by all that John taught me and made possible over the years. As a person, as a teacher, as a scholar, as a leader, as a visionary in the field, John contributed a mighty share to my own endeavors in each of these domains. Many of his other students would say the same. I, too, still retain and periodically consult the notebooks I filled while seated in his classrooms. I would not – could not – be who and where I am today without John Cook’s professorial and collegial vision and generosity. This field that he helped shape has lost one of its leading lights. His expansive contributions nonetheless continue to reveal themselves and multiply for succeeding generations of scholars.