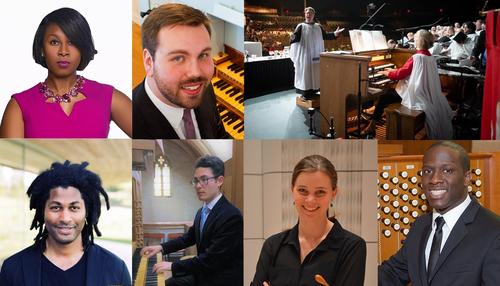 A. Nathaniel Gumbs (M.M. organ ’11), Chase Loomer (M.M. organ ’20), and Grant Wareham (M.M. organ ’20) have all been selected to compete in the 2019 Longwood Gardens International Organ Competition. They will all participate in the competition’s preliminary rounds June 18–19, and those that make it to the top five will compete in the final round on June 22. The competition takes place in the magnificent Ballroom at Longwood Gardens near Philadelphia, Pennsylvania. Tickets are available now at longwoodgardens.org.

Grant Wareham (M.M. organ ’20) was honored as one of The Diapason’s “20 Under 30” for 2019. He was also the organ soloist in the May 19 premiere of the Assisi Concerto for organ and chamber orchestra by Francesco Santelli.

Kenyon Adams (M.A.R. ’15) was appointed director of the Louis Armstrong House Museum in Corona, Queens. Among his duties, he will oversee the completion of the museum’s construction and renovation plans, including a 14,000-square-foot education and performance center.

A new recording, Love so amazing: the hymn arrangements of Stuart Forster, was released today by Affetto Records, distributed by Naxos. It features the combined choirs of Christ Church, Cambridge, MA, and Church of the Redeemer, Chestnut Hill, MA, with brass, percussion, and the new Schoenstein organ at Redeemer played by Stuart Forster (M.M. organ ’98, A.D. ’99) and conducted by Michael S. Murray. Two volumes of arrangements were published by Selah Publishing last summer, with the third volume arriving soon.

Dr. Alisha Lola Jones (M.Div. ’07) is an assistant professor of ethnomusicology in the department of folklore and ethnomusicology at Indiana University (Bloomington). Her article “You Are My Dwelling Place: Experiencing Black Male Worship as Aural Eroticism and Autoeroticism in Gospel Performance” was published in the Women and Music journal (October 2018) and her book Flaming?: The Peculiar Theo-Politics of Fire and Desire in Black Gospel Performance is now under contract with Oxford University Press. In April 2019, she was a consultant on the research team that designed the opening concert series “Soundtrack of America” for The Shed in New York, directed by Steve McQueen with Quincy Jones as the chief music advisor, Greg Phillinganes as the music director, and Dr. Maureen Mahon as our lead research consultant. The premiere was covered in the Wall Street Journal, Vogue, The Economist, Hollywood Reporter, Variety, and The New York Times. This summer, she has been invited to present research at Oxford University in London and at the Chautauqua Institute in New York; and to preach at St. Paul’s Cathedral in London and at Spelman College for their 2019 Baccalaureate. Lastly, through her production firm Insight Initiative, she has gained live production credit with YouTube, Google, and the Tribeca Film Festival this year.

Dexter Kennedy (M.M. organ ’14) presented a recital for the Grand Rapids Chapter of the American Guild of Organists in November 2018. 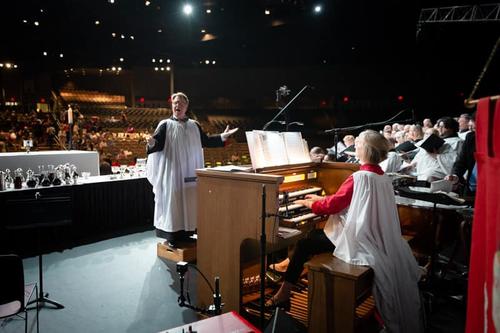 David Perry Ouzts (M.M. organ ’87) served as music committee co-chair and conductor and organist for the recent consecration of the Fourth Episcopal Bishop of West Tennessee, the Right Reverend Phoebe A. Roaf, which was held on Saturday, May 4, 2019 in the five thousand-seat Hope Church in Memphis, Tennessee. A massed choir of 116 singers from parishes throughout the diocese sang choral works of Stanford and Mendelssohn, along with hymn settings by Richard Webster and James Biery. New commissioned compositions by Sondra Tucker and Dennis Janzer were also sung, and organ works of Karg-Elert and Widor served as voluntaries. The choral prelude was sung by the Lemoyne-Owen College Concert Choir (Gavin Wigginson, director). A video of the service is available at www.episwtn.org. Dr. Ouzts is in his eighteenth year as minister of music and liturgy at Church of the Holy Communion (Episcopal), Memphis, Tennessee.