Alumni: send your news to Rondasia Curry (rondasia.curry@yale.edu) and be sure to tag @ISM in your social media!

During a visit to Yale in May, Robert Bennesh (M.M. ’14; A.D. ’15) had the opportunity to catch up with Professor Emeritus Thomas Murray, with whom he studied during his time in the ISM. Robert, director of music in Lund Cathedral, Sweden, was able to inform him and have a conversation about the extensive ongoing project of planning a restoration and rebuilding of the main organ at the Cathedral. The aim is to bring existing pipework from 1836 and 1876 forward in the tonal blend and make it the backbone of the instrument. “It was helpful and inspiring to gather Tom’s views about using pipework from different stages of the organs history to create a new whole and what he thought was important aspects to think about in making the organ capable of delivering the needs of a demanding music program”, says Robert. It was also an opportunity to talk about Robert’s recent appointment as chair of the Church of Sweden’s national committee for service music, which is working on a supplement to the Swedish official books of worship. Another topic of conversation was the upcoming 900th anniversary of Lund Cathedral and the commissions of new music; particularly noteworthy is an upcoming piece for organ solo by British composer Judith Bingham.

Tawnie Olson’s (A.D. ’00) Magnificat has been published by Oxford University Press. She was invited to write a blog post about it for OUP. Her “Sanctuary and Storm” (libretto by Roberta Barker) also won the 2021-2023 National Opera Association’s Dominick Argento Chamber Opera Composition Competition.

Carol Williams (A.D. ’97) has been appointed organist and Artist in Residence at Peachtree Christian Church in Atlanta, also known as “A Cathedral for the City.”

Mezzo-soprano Karolina Wojteczko (M.M. ’20) performed sacred music selections from across the centuries with organ, violin and cello accompaniment in March, with proceeds donated to the immediate needs of Ukrainian refugees.

The ISM was well represented at this year’s conference of the Society for Christian Scholarship in Music, which met at the beginning of March at Mercer University in Georgia. Prof. Markus Rathey presented the paper “The Sonic Color Line between Spirituals and the Classical Canon: The Germany Tour of the Fisk Jubilee Singers in 1877–78.” Alexandra Dreher (M.A.R. ‘22) gave a talk on “The Unsung Violence of a “Völkisch” Hymnal,” and Mathew Bickett (M.A.R. ‘23) presented his paper “Music at the Limits of Theological Writing: Toward a Decolonial Music Theology,” which won the prize for the Best Paper Presented by a Graduate Student.

Sally Promey presided over and was featured in, a MAVCOR virtual roundtable on E-publishing that took place back in November 2021.

Markus Rathey announces the publication of Sacred and Secular Intersections in Music of the Long Nineteenth Century: Church, Stage, and Concert Hall, co-edited with Eftychia Papanikolaou (published by Lexington Press). “The book,” he writes, “is part of a multi-year research project on music and religion in the long nineteenth century that involved colleagues from the US, Europe, and Asia. A first book (co-edited with Jeremy Begbie and Daniel Chua) has already appeared last year (Theology, Music and Modernity, OUP 2021) and focused on the philosophical and theological discourses in the decades around 1800. The new book now extends the focus to works from the later nineteenth century and also highlights musical traditions from France, Russia, Poland, and the US. My own contribution is an essay on the reception of African American spirituals in Germany during a tour of the Fisk Jubilee Singers in Germany in the later 1870s.” 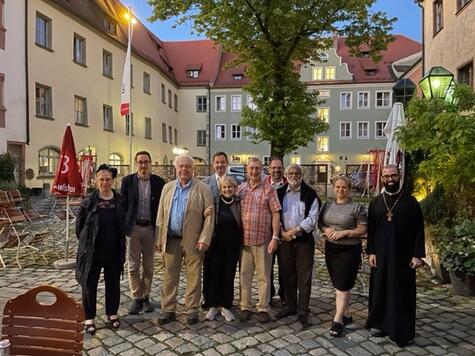 Vasileios Marinis has been promoted to Professor of Christian Art and Architecture.