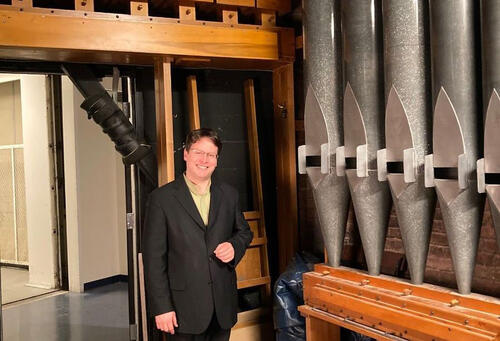 Horace D. Ballard (M.A.R. ’10) has been appointed as the new Theodore E. Stebbins Jr. Associate Curator of American Art at the Harvard Art Museums, effective Sept. 1, 2021. Ballard is currently curator of American art at the Williams College Museum of Art, in Williamstown, Massachusetts, where he was previously assistant curator from 2017 to 2019.  | Read More

Christian Detisch (M.Div. ’20) and his wife are moving to Asheville, NC where he will be a chaplain resident at the Asheville VA Hospital.

Wesley Hall (M.M. ’15), minister of music and the arts at First Baptist Church of Worcester, MA, has become something of a TikTok sensation. According to an article in Worcester Magazine, one of his series of entertaining organ videos has topped 340k views.

Paul Jacobs (M.M. ’02; A.D. ’03) has received the 2021 International Performer of the Year Award from the American Guild of Organists. A sponsored recital is being planned for 2022 in New York City. Previous award recipients include Professor Emeritus Thomas Murray (in 1986).

Joseph Kemper (M.M. ’18) will be Visiting Assistant Professor of Music and Choirs at Whitman College, in Walla Walla, WA for the 2021–2022 academic year.

Karen Schneider Kirner, M.M./M.A.R. ‘90, has just published her first collection of responsorial psalms, written over her 23-year career serving as a choir director and organist with Campus Ministry at the University of Notre Dame, at the Basilica of the Sacred Heart. It’s entitled “Let the Peoples Praise You: Psalms for the Liturgical Year” and is published  through the Liturgical Press of Collegeville, MN. It’s updated with the latest texts approved by the United States Conference of Catholic Bishops. She has now retired from the University of Notre Dame, is serving as Organist/Director of Music for Grace United Methodist Church in South Bend, works on various composing/recording projects, and teaches private piano and organ students.

Nicholas Quardokus (M.M. organ ’18) has been appointed Canon Organist and Director of Music at Grace Church Cathedral in Charleston, SC. He had served as Assistant Organist at St. Thomas Church, Fifth Avenue in New York City since 2019.

Spencer Reece (M.Div. ’11) was recently interviewed by Philip F. Clark for A&U: America’s AIDS Magazine upon the publication of a new book, The Secret Gospel of Mark: A Poet’s Memoir by Seven Stories Press (2021). Read their conversation on the A&U website.

Christopher-Rasheed McMillan (2020–2021) will be a fellow at the Center for Ballet and the Arts at New York University for the upcoming academic year. The CBA fellows come from a multitude of disciplines: artists to develop new work and scholars to develop new ideas, creating new dances and building artistic collaborations. At the CBA, McMillan will endeavor to complete his book, Performance Criticism: Scripture, Sex and the Sacred, which questions how beliefs function through the performative. He will also work on a new dance work titled “Sacred.” McMillan seeks to understand both the meaning of the religious body in performance and the arrangements of the religious bodies in space as central parts of both lived experience and enactments of spiritual practices.

Mark A. Miller, director of Craig Chapel and associate professor of church music at Drew University has been named a Scholar/Teacher of the Year by the university.

After four years at the ISM, Stephen Gamboa-Diaz has accepted a promotion to Web Producer at Yale’s central Office of Public Affairs and Communications. His warm good humor, sharp wit, and consummate skills will be missed here. Congratulations and good luck from all of us at the ISM!