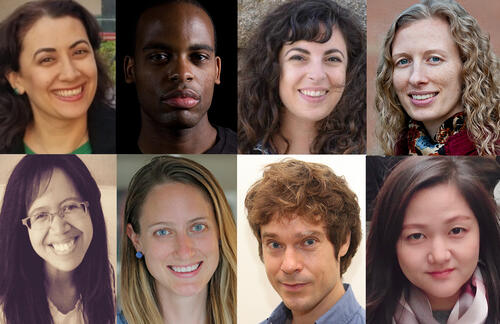 The Yale Institute of Sacred Music is pleased to announce that eight fellows have been selected for the 2020–2021 year.

The Institute is an interdisciplinary graduate center educating leaders who foster, explore, and study engagement with the sacred through music, worship, and the arts in Christian communities, diverse religious traditions, and public life. With a core focus on Christian sacred music, the ISM builds bridges among disciplines and vocations and makes creative space for scholarship, performance, and practice.

The ISM Fellows in Sacred Music, Worship, and the Arts are scholars, religious leaders, or artists at all career stages whose work is in or is turning toward the fields of sacred music, liturgical/ritual studies, or religion and the arts. The Fellows have numerous opportunities to share their work with the community and to teach, as well as to work on their individual projects using Yale’s vast resources. Following in the footsteps of previous cohorts of ISM fellows, the 2020–2021 fellows represent a cross-section of cultures and disciplines.

After receiving her Ph.D. in Arabic and Islamic Studies from Georgetown University in 2017, Heba Arafa Abdelfattah was a visiting assistant professor of Arabic and Islamic Studies at Georgia Institute of Technology. She comes to Yale from London, where she has been a research fellow at the Aga Khan University Institute for the Study of Muslim Civilizations. She is currently completing a book manuscript on film, Islam, and modernity in colonial Egypt. At Yale, her project will center on the study of the Arabic genre of “Islamic Hymns” (ibtihalat) as an exemplar of a popular culture approach to study Islam as a lived experience based on the inclusion—not the elimination—of difference.

Meg Bernstein is a 2013 ISM/YDS graduate (M.A.R. in religion and visual culture), who received her Ph.D. from U.C.L.A. in the history of art in 2019.  She returns to Yale to work on a book project, “The Lives of the Laity: Parochial Architecture, 1150-1300,” to challenge the assumption that medieval parochial architecture simply derived from that of larger, more important churches by proposing the parish church as a distinct genre, examining its emergence and codification in response to the changing needs of the medieval laity. She argues that changes in the architectural typology of the period were driven by social, economic, liturgical, and theological factors, particularly the emergence of a new gentry class, Eucharistic developments, and the solidification of the doctrine of Purgatory.

Rebecca Dirksen is associate professor (as of July 1) in the Department of Folklore and Ethnomusicology at Indiana University. She will devote the fellowship year to “Against Scorched Earth: Haitian Vodou as Sacred Ecology,” a multimodal project combining scholarship with public-facing activism toward environmental justice. This theme opens up exploration of how humanity, the divine, and the environment intersect in powerful ways, with the sacred Vodou drum—the tanbou–seen at the center of these intersections. The fellowship will support work on a book manuscript, the production of ecologically relevant music videos in partnership with Haitian artists and activists, and efforts to expand the scope and reach of a museum exhibit about Haiti’s sacred drums and trees in the face of centuries of deforestation and environmental degradation.

Caroline Gruenbaum returns to Yale in the fall to continue work on her book manuscript titled King Arthur’s Jewish Knights: Translation and Religious Identity in Medieval Ashkenaz. The monograph focuses on the corpus of Hebrew translations of secular stories in the twelfth and thirteenth centuries in Christian Europe, and the relationship between literature and religious identity for Jewish translators and audience. Through this research, she argues that secular Hebrew literature found a new foothold in Jewish communities of medieval Europe.

Bo kyung Blenda Im is a 2012 ISM/YDS graduate (M.A.R. in religion and music) who received her Ph.D. in ethnomusicology in fall 2019 from the University of Pennsylvania. During the spring 2020 semester, she returned to YDS and the ISM as a lecturer in ethnomusicology. Her ethnographic project “Transpacific Modernity and the Challenge of Belonging: Negotiating Race, Music, and Faith in Seoul” centralizes Korean Christians’ engagements with black gospel and contemporary worship music. Holding the analytics of race, music, and religion in productive tension, she draws attention to the ways in which Korean and Korean diasporic Christians, in their articulations of selfhood and community, navigate and radically contest the normative conditions of transpacific modernity.

Christopher-Rasheem McMillan is a choreographer and a scholar who comes to Yale from the University of Iowa, where he holds appointments as assistant professor of gender, women’s & sexuality studies and assistant professor of dance theory and practice. He has a M.F.A. in experimental choreography from TrinityLaban (UK)  and a Ph.D. from King’s College, London (UK) in theology and religious studies. His Yale project will take two interdependent approaches: completion of a book entitled Performance Criticism: Scripture, Sex, and the Sacred and an evening-length performance called Sacred| Scripture as choreology. Taken together, the components will create new knowledge, methods, and approaches not only for theorizing the cultural impact of the choreographic through theological discourse, but also for creating practical and impactful approaches to body-based art and meaning making.

Marie-Ange Rakotoniaina, a liturgical scholar whose work focuses on early Christianity, received her Ph.D. in religion from Emory University in 2020. Her fellowship project explores how Augustine’s preaching on the subject of the Sabbath opens new possibilities of religious devotion. Her investigation of various metaphors of the spiritual Sabbath in relation to devotional practices in their liturgical contexts—from fragrance to musical instruments used in psalmist worship or the changing performance of Augustine’s congregations, from memory to desire, from sanctification to obedience—reveals how the practice of the Sabbath finds an original place within the private landscape of the heart.

Riley Parker Soles, who received a Ph.D. in East Asian Languages and Literature from Yale in 2018,  works comparatively at the intersection of literature, religion, and philosophy, with particular interests in hermeneutics, textual ontology, and the event/act/experience of reading. He returns to the ISM for a second year to continue work on his book project, The Ecstasy of the Text, which investigates the ways in which texts from both Western and East Asian literary and religious traditions express and enact a self-reflexive awareness of their own ontological status as texts and attempt to subvert the limitations of their materiality.

The Institute is delighted to welcome—and welcome back—these members of our community, and looks forward to a rich and fruitful dialogue reflecting the breadth and diversity of its mission. More information on the Institute and its various programs is online at ism.yale.edu.