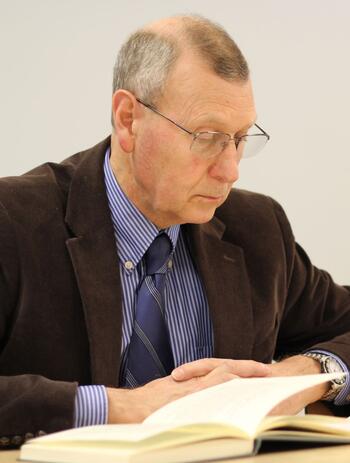 Bryan Spinks, the Bishop F. Percy Goddard Professor of Liturgical Studies and Pastoral Theology, has retired from Yale at the end of this 2021-2022 academic year, after an enormously varied and fruitful career in the research and teaching of liturgical studies spanning four decades. In his twenty-four years at YDS/ISM, Spinks delved into his extraordinarily broad fields of interest, publishing seventeen books and many more articles on topics within marriage liturgy, English Reformation worship traditions, eucharistic prayer and theology, liturgy of the Eastern churches, and contemporary worship. While on sabbatical at Oxford as a Fellow at Corpus Christi College this spring, Spinks reflected with me via Zoom on the surprising windows of opportunity that have opened within his dual vocation of teaching and ministry.

Spinks fell, almost by chance, into research and teaching. At the age of twenty, he was a student at St. Chad’s College at Durham University, a Church of England Theological college, studying theology for ordination. The curriculum allowed exactly one elective. Spinks chose a course in liturgical studies. He was told he had a “flair” for it by a St. Chad’s College tutor but was cautioned not to do too much of it.

In the early 1970’s liturgy was not considered a serious field of study in the United Kingdom. There were no positions in it. Teaching assignments in liturgical studies were thought to be lightweight, a topic anyone could “muster up,” as Spinks says. Even today, there are still no full time positions in liturgical studies in the U.K.; it is considered “too odd a subject, too ecclesiastical, and too practical.” Back in 1971, Spinks was advised it was a field with no future.

Spinks ignored this advice. He remembers, “I was obstinate. And I couldn’t see any point in doing research in an area I was not passionate about.” He not only continued to study liturgy, but he dove headlong into English Reform Liturgy, fascinated by the recently published 1970 Order of Public Worship, a eucharistic liturgy of the Congregational Church in England and Wales. Not content with one area of research, he was drawn to early Christian liturgical studies and quickly taught himself to read Syriac while holding down a job as the Deputy Registrar of Births, Deaths, and Marriages at Chelmsford in Essex - a temporary job which contributed to a lifelong interest in marriage liturgy. But his first article in liturgical studies, published in 1973 at the age of twenty-five, was, oddly enough, on Martin Luther, a figure quite outside Spinks’ confessional path. Spinks, with characteristic forthrightness, corrected what he saw as grave errors in understanding Luther’s approach to the canon of the Mass.

Spinks remembers that, at the time, prevailing scholarship on Luther’s reforms held that “Luther brought a hatchet to canon. That he just cut things out and left the Words of Institution, and then he couldn’t even be bothered to put the Sanctus in the right place. And the more I read of Luther, I thought, this is not right at all.” As Spinks began to read more about Luther’s position on reform in worship, he realized that not only did Luther value the Words of Institution but saw them as the “nutshell of the Gospel.” And Luther emphasized the importance of this part of the canon with his arrangement of music as part of the Mass. “So, he was bringing something new to it,” Spinks says.

Spinks’ publications on Luther drew attention on this side of the Atlantic — attention from Lutherans. The Missouri Synod invited Spinks to lecture in America. Spinks laughs in remembering the irony of it: “They said, it takes an Anglican to tell us what Luther is!”

He was given midwestern hospitality at an Episcopalian Seminary: “I lodged overnight at Seabury-Western, but the Episcopalians at the Seminary did not ask me to give a talk … I think it was because they were suspicious of this Anglican who has written something on Luther.” Spinks’ lecture and publication profile prompted liturgical studies scholar Paul Bradshaw to recommend Spinks for a guest appointment at Notre Dame in 1996.  This eventually led to the invitation to teach at Yale in 1997, where Margot Fassler, liturgical studies scholar and artist, was director of the Institute of Sacred Music. 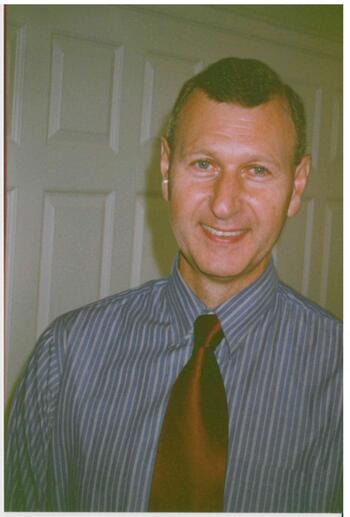 Spinks, in his earliest days (as pictured here), commuted on the Shoreline East into New Haven with Fassler. He remembers her boundless ideas, energy, and enthusiasm and support — even in early morning hours — for this fellow colleague in liturgical studies from across the pond. He also remembers how deeply satisfying it was to have found a supportive home for his passions and research. Spinks says ruefully that while, on some level, the life of a U.K. academic expat leaves him in limbo (“You don’t really have a home”), Connecticut has become a permanent landing spot. But he returns to England for continued inspiration and spent his last semester at Yale on sabbatical researching 19th and 20th century liturgical traditions in Anglican parishes in his home county of Essex.

Spinks, in looking back over his teaching career at Yale Divinity School and the Institute of Sacred Music, cites a refrain often repeated to his students: ”Liturgy, like all theology, is a course of academic study. And respectable. But the subject it deals with — God — is neither academic nor respectable.”

How does a student of liturgical studies approach this non-academic, non-respectable God, in the study and context of worship? Spinks recommends looking at the focal point around which religious communities gather. He  says that for those in the trenches, those planning “how to do church,” it is good to remember that “what mostly draws people together is worship on a Sunday … if you get it wrong there, you get it completely wrong. That’s where most lay people learn their theology.”

Spinks has spent a career studying the tensions involved in getting worship right, in arenas both theoretical and practical, in the past and in the present. He has labored forty years as a professor in higher education, but forty-seven working in parish ministry. After eighteen years as a chaplain in England at Churchill College in Cambridge, U.K., in Connecticut he became a Presbyter in the Middlesex Area Cluster Ministry. He is currently priest-in-charge at St. Andrew’s in Northford. He describes the two roles of teacher and minister as being “part of a total vocation,” one that has spanned his entire life, with the roles providing necessary checks and balances on each other.

“It was certainly helpful for me in coming to Yale. In teaching academic liturgy, if you are not anchored in worship, you can teach theoretical, lovely, perfect stuff, but it doesn’t exist in the real world. It has always made me have a foot in the real world…the human in liturgy is far greater than is sometimes thought.”

Spinks’ strongest memories of his first years at Yale in 1997 resonate on a very human level: “It was all new to me and I was just trying to understand it, and twenty-four years later I am still trying to understand it. But you should know that the Divinity School itself was a total wreck. There was mold on the walls, broken windows, broken furniture…of course the people were lovely, and the students were lovely, it’s just that the teaching spaces were horrible.” Spinks’ tenure then spanned the comprehensive refurbishing of the YDS campus that took several years at the turn of the century.

But there were compensations. Spinks reflects that it was only at ISM that he was first able to fully embrace his own research, to have full freedom to pursue his interests in research and teaching and vocation: “The pleasant thing about the ISM was that the field I taught was valued and I was given all the encouragement and freedom I needed. I was able to develop syllabi that I could not possibly have been able to teach in England. I was valued … I was respected as a fellow theologian.”

Spinks also emphasized that it was an honor to be surrounded by colleagues who have had a big part in the evolution of the field, like former liturgical studies colleagues Siobhán McGarrigan and Lester Ruth. And he spoke with great warmth and respect for current faculty colleagues Teresa Berger and Melanie Ross.

“Although I came [to Yale] with my own new ideas, having those two colleagues, they have nudged me into places I wouldn’t normally have gone. I tried to be, as far as I could be, authentic to what I was teaching … but I would certainly say that I have been broadened.”

Spinks’ 2016 “Imagining the Past: Historical Methodologies and Liturgical Study,” a chapter in the volume emanating from the 2014 ISM liturgy conference (Liturgy’s Imagined Past/s: Methodologies and Materials in the Writing of Liturgical History Today) that he edited with Berger, pays tribute to the varied research and scholarship of the ISM faculty. It is also a visionary article that talks about memory and the part it plays in history. Spinks writes that within historical studies, we must remember that we are envisioning the past. Likewise, the creators of the liturgical artifacts under analysis are also imagining; liturgical texts do not only document, but they also invent ideas of worship. He emphasizes that we must broaden the scope of methodology within the evolution of liturgical studies to see the past most clearly.

What does Spinks see in the future of liturgical studies? Spinks is less than optimistic. He points to the continued dearth of serious attention for liturgical studies in the U.K. “My fear is that might be happening in the States. After the 70’s the 80’s there was a huge growth in positions in liturgy in the United states because people regarded it as important. But now maybe we’ve entered a time of some stability in terms of liturgical change, after all the excitement of Vatican II and the all the new liturgies in all churches.  And so perhaps it’s become less pressing for seminaries and divinity schools.”

But there are always surprising reversals. In reflecting on a lifetime of teaching, preaching, and ministering, Spinks remembers that his faith underwent an early trial, from which it was rescued by an unexpected source. In his first theology degree at St. Chad’s College, he recalls that he spent too much time reading “Bultmann, Robinson, the Death of God theology,” and “mythologizing the Gospels,” all of which threatened to render him a priest with exactly nothing to preach about. He was, to his complete astonishment, restored to faith by studying the work of Karl Barth. Spinks recalls that he decided, at age 20, “ I’m going to read this person because it must be a load of rubbish. So, I read Barth’s Commentary and it just sort of blew me away. It was somebody who was wrestling not with not whether a certain word should be translated as ‘and’ or ‘but,’ but with much deeper spiritual things about God and the purpose of history.”

This deep wrestling with spiritual things — about God and the purpose of history, and how it manifests in “the human in liturgy” — continues to illuminate Spinks’ career, research, and ministry.