There have been lots of changes at the ISM over the past few months! Look for announcements of new appointments in the next issue. 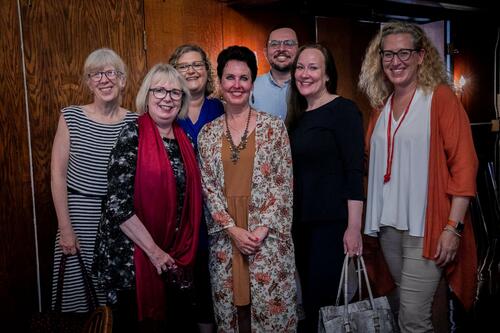 Laura Adam, who managed the ISM concert office and music programs for almost seven years, left the ISM in March to become assistant director in the Office of Institutional Affairs at Yale, which supports the governance functions of the University. She will draw on the extraordinary powers of leadership and organization displayed at the ISM, where she oversaw a staggering number of productions, recordings, recitals, and tours, and resolved crises of many kinds.

Rondasia Curry is the new marketing and communications coordinator at the ISM. Her special focus is on social media, taking over from Faith Hahn, who stepped in temporarily and grew the ISM’s social media presence after Stephen Gamboa-Diaz’s departure last year. Rondasia brings expertise in photography and design, as well as in digital communications.

Eric Donnelly joined the staff on an interim basis in January to support the Interdisciplinary Program in Music and the Black Church.

Erin Ethier, the ISM’s lead administrator since 2019 – who so admirably guided the ISM through the pandemic and so many other changes – has accepted a position as the inaugural director of finance and administration at the Yale School of Engineering and Applied Science, with a key role in its transition to a distinct budgetary unit separate from the Faculty of Arts and Sciences. She will gradually take on this role over the course of July while closing the fiscal year for the ISM.

Melissa Maier, the longtime manager of marketing and communications known for her commitment to excellence and to the ISM, will retire from Yale on July 8. She will continue to expand new opportunities, teaching English this fall at Southern Connecticut State University and the University of New Haven.

Laurie Ongley, an integral part of the concert office team since 2015 focusing on Camerata, bringing scrupulous attention to detail, deep knowledge of languages and music (in which she has a Ph.D. from Yale) among other positive qualities, officially retired from Yale in January. She continues to support the concert office in several capacities.

Director of Chapel Music Nathaniel Gumbs played organ recitals at Saint Thomas Church in New York in February, and at the Walt Disney Concert Hall in Los Angeles in May.

Laura Chilton, former executive assistant to Martin Jean (and later to Robert Blocker at YSM) has died after a yearlong battle with cancer. She had moved to Spearfish, SD to be near family and had hoped to build a home there.